Want to Get the Most Out of Your Uncompensated or SDM Submarine Cable? Here’s How.

In a previous blog, I discussed how Infinera’s ICE6 coherent optical engines enable submarine network operators to get up to 50% more capacity on the dispersion-managed cable systems that were widely deployed between approximately 2000 and 2015. In this follow-on blog, I will focus on how ICE6 is also maximizing performance, including spectral efficiency, on the newer uncompensated and space-division multiplexing (SDM) cables that have been deployed since approximately 2015 and 2020 respectively. One indicator of the prevalence of these cable systems is TeleGeography’s submarine cable map, which shows 188 cable systems with a ready-for-service date in or after 2015, as shown in Figure 1, including 75 with ready-for-service dates between 2022 and 2026. 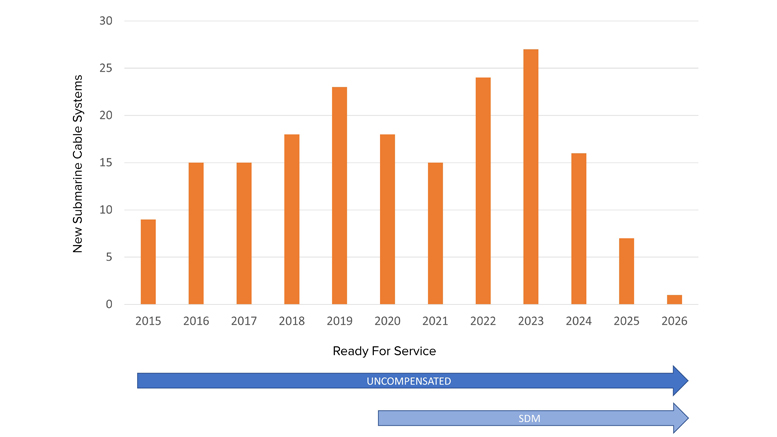 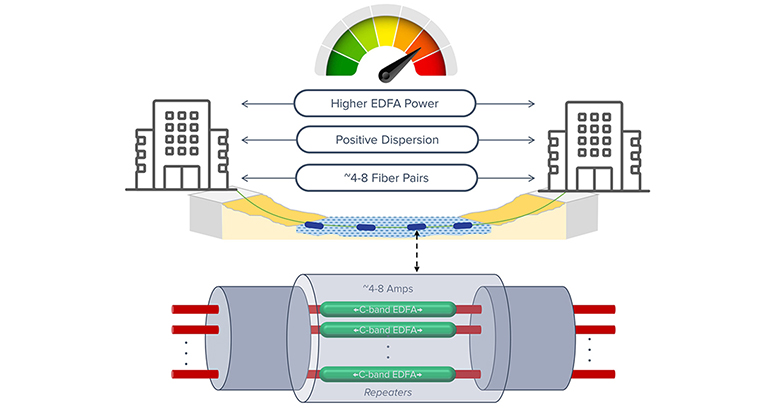 Uncompensated cables, shown in Figure 2, have been widely deployed for submarine applications from around 2015. The G.654 fibers used in these cables have a large pure silica core that results in lower loss, latency, and nonlinearities. They also have high chromatic dispersion, which is extremely beneficial for coherent transmission as it decreases the likelihood that symbols on different wavelengths propagate together, changing the refractive index of the fiber at the same time though the Kerr effect and causing nonlinear penalties such as cross-phase modulation (XPM).

For example, Corning’s widely deployed G.654.D Vascade® EX3000 has an effective area of ~153 mm2, loss of 0.154 dB/km, and chromatic dispersion of +21 ps/nm/km, with figures for the G.652.D fiber (based on specifications for Corning’s SMF-28® Ultra) commonly used in terrestrial networks shown for comparison in Table 1. These submarine cables are optimized for high capacity per fiber pair, which is achieved through spectrally efficient modulation and high wavelength power.  The large effective area of these fibers reduces the nonlinear penalties of higher per-wavelength power to an extent. However, at the high power levels these fibers typically operate at, nonlinearities are still a key challenge. 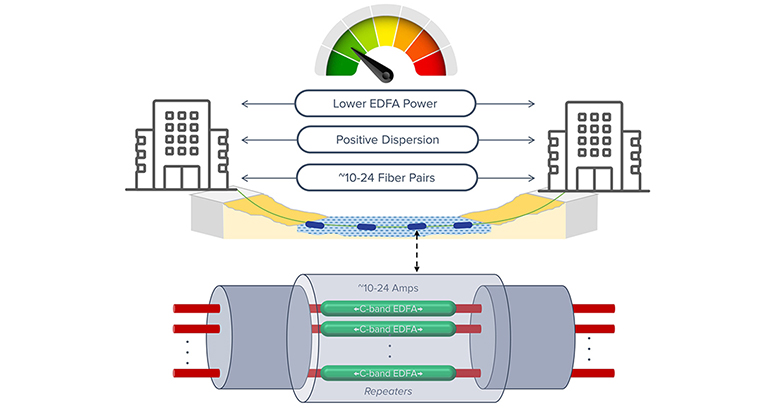 Prior to 2020, submarine cables were deployed with two, four, six, or eight fiber pairs per cable and followed a philosophy of maximizing spectral efficiency and capacity per fiber pair (not the overall cable). Since 2020, new SDM cable systems, shown in Figure 3, which follow a different philosophy, have increased the number of fiber pairs in the cable. With SDM, we sacrifice maximum spectral efficiency and capacity per fiber pair for higher overall capacity per cable.  Each fiber pair operates with reduced electrical power for amplification and therefore lower individual fiber pair capacity, but the overall cable capacity is higher due to the increased fiber count.

SDM cables listed on the Submarine Cable Networks site, together with how many fiber pairs they contain and their ready-for-service dates, are shown in Table 2. The number of fiber pairs in these SDM cables is 10, 12, 16, 18, 20, or 24. However, as these SDM cable systems run at relatively low wavelength power levels, low system signal-to-noise ratio (SNR) at the receiver is a key challenge for coherent transceivers to overcome.

As uncompensated large-effective-area fibers run with high power per wavelength, ICE6 supports a super-Gaussian distribution, shown in Figure 5, that results in lower kurtosis, the variation in the power levels of the symbols, and therefore has even lower nonlinear impairments. On the other hand, as SDM cable systems run at relatively low wavelength power levels, low system SNR at the receiver is a key challenge. A “regular” Gaussian distribution is an ideal solution to this challenge, as it provides a larger Euclidean distance between the constellation points relative to super-Gaussian, and therefore has higher tolerance to amplified spontaneous emission noise from the repeaters.

Even on the same submarine fiber, performance in different parts of the spectrum typically varies with tilt, ripple, dispersion, and nonlinearities. As discussed in a previous blog, ICE6 currently supports 400+ line modes combining baud rate, modulation, framing type, FEC, and other parameters while aligning to useful bandwidth increments (i.e., 50 Gb/s or 100 Gb/s). This avoids the wasted margin that would result from using a single mode across the entire spectrum of the fiber, as shown in Figure 6. Instead, it enables an optimal mode to be selected for each part of the spectrum, as illustrated in Figure 7, thus minimizing unused margin and maximizing the total capacity of the fiber.

Figure 7: Maximize capacity with optimal modes for each part of the fiber’s spectrum

ICE6 has already been selected for multiple uncompensated cable systems, including Seaborn’s Seabras-1 and AMX-1, EllaLink, PEACE, AAE-1, and Monet (Angola Cables and Algar Telecom). ICE6 also demonstrated record-breaking results on the uncompensated MAREA cable, as shown in Figure 8. Over 6,644 km of uncompensated fiber, ICE6 demonstrated a “hero result” (i.e., with low margin) of 700 Gb/s per wavelength and 30 Tb/s per fiber pair. With deployable margin, the result was wavelengths of up to 650 Gb/s and 28 Tb/s per fiber pair. And while there are currently very few SDM cables in operation, ICE6 has also delivered great results in trials on SDM cables and has already been selected for multiple deployments. 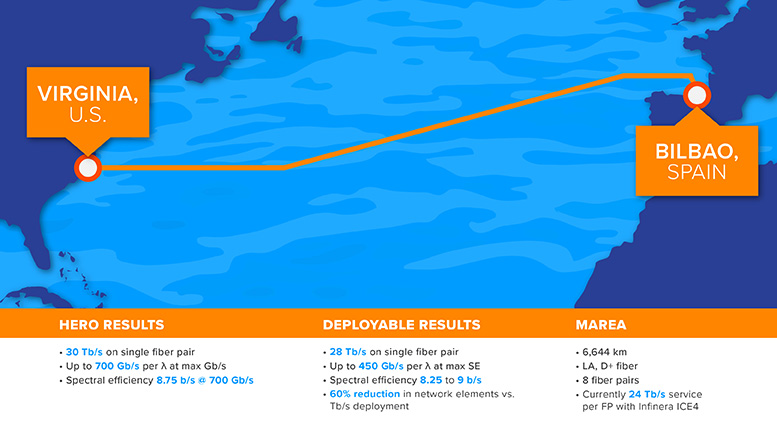 Benefits of this record-breaking performance include more capacity, lower power consumption, reduced footprint, and lower cost per bit. For more details on this topic, download the Infinera application note, ICE6 for Submarine Networks.