TIP Summit Goes Off with a Bang! - www.infinera.com
×
×
About Us / Newsroom / Blog

TIP Summit Goes Off with a Bang!

Last week I attended my first Telecom Infra Project (TIP) Summit, and wow, what an event! Congratulations to the organizers, presenters, and support teams at TIP Summit ‘19, who’ve just put on one of the best events I’ve attended for a while. Very slick production, informative presentations, good swag, and most importantly, a really vibrant atmosphere. From the show of hands at the start of the event, many of us in the auditorium were attending for the first time, and I’m sure most would agree with what I’ve just said.

The two-day event kicked off with a series of keynote presentations where executives from T-Systems, Telefónica, and Vodafone outlined the great advances that have been made over the 12 months since TIP Summit ‘18 in London. Key among these were significant announcements on progress in the OpenRAN and disaggregated cell site gateway (DCSG) projects driven by TIP.

Progress with RAN Disaggregation Through OpenRAN

Vodafone announced significant progress with their OpenRAN trials, moving from an RFI to successful field trials of OpenRAN technology. OpenRAN takes traditional radio access network (RAN) hardware and breaks it down into open software components that can run on standardized compute platforms and interoperate between vendors.

Interestingly, Vodafone announced the vendors that responded to the RFI, and the list included seven of them, mainly newer OpenRAN specialists but also some with a longer history, such as Samsung, which according to Vodafone scored the highest out of all the vendors in the RFI. Interestingly, though, none of the big three traditional RAN vendors chose to respond to the RFI. From my perspective, this shows how disruptive the move to disaggregation can be, as well as the importance of having a deep understanding of the underlying application when embarking on this process.

Winners in this space will be those vendors that can combine the value of new disaggregated architectures with experience and hardened software from proven large-scale deployments in the previous “non-disaggregated” era.

To cap this progress off, based on the success of the ongoing trials, Vodafone announced that they were initiating a new OpenRAN RFP for the bulk of their European footprint, over 100,000 cell sites. This makes it one of the biggest RFPs in the mobile industry outside of China and a clear validation of the progress Vodafone has made toward disaggregation in the RAN.

Telefónica announced their progress with DCSG, including the world’s first large-scale deployments of this technology in Germany and Ecuador, and calling out their partner in the projects – Infinera! Naturally, all the Infinera attendees and the company in general were very proud to be associated with this landmark announcement.

The DCSG project takes the traditional cell site gateway architecture and splits it into open hardware capable of running any network operating system (NOS) software and NOS software that can run on any open DCSG hardware. Prior to the TIP Summit, TIP, Infinera, and Edgecore Networks announced that Telefónica was deploying Infinera’s DRX Series hardware and CNOS software, and that both Infinera’s DRX-30 and Edgecore’s AS7315-27X-DCSG supported DCSG applications with CNOS software.

My perspective is that the strong public statements Telefónica made multiple times during the TIP Summit announcing that they had started commercial deployments of DCSG technology from Infinera were a proof point of how proud Telefónica also is of this achievement, as well as of the value it brings to these networks and ultimately to the end-user experience.

One interesting observation is that while driving for the benefits of an open architecture, Telefónica still understood the challenges of system integration and chose Infinera as a single vendor for both open hardware and software.

Even when disaggregation leads to a single vendor providing both the hardware and the software, the benefits of disaggregation can still be obtained. The open architecture removes traditional vendor lock-in and provides better flexibility and scalability while also positively changing the economics.

Infinera on the Main Stage

Rounding off the first morning on the main stage was a panel that took the DCSG topic to a deeper level, discussing the DCSG concept and the overall impact of a disaggregated network. The panel consisted of Christoph Glingener, who is ADVA’s CTO; George Tchaparian, CEO of Edgecore Networks; Joe Ghalam, Distinguished Engineer at Dell; and Parthiban Kandappan, Infinera’s CTO, and was chaired by Luis Martin Garcia, who is an Engineering Manager at Facebook and co-lead of the DCSG initiative within TIP. Quite a distinguished line-up! 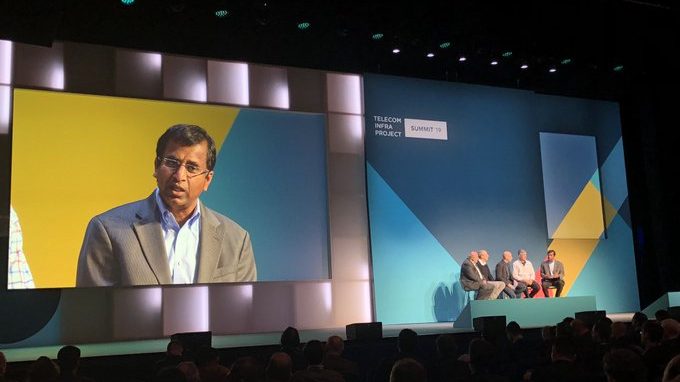 Overall this was a very interesting event, discussing technology trends that are rapidly changing the way mobile networks are being built. One of the main enablers of the modern social media-driven world was the trend toward disaggregation within the data center.

This trend enabled data center owners to significantly simplify the building, expansion, and ongoing management of their data centers, and TIP is capitalizing on this experience to help simplify current 3G/4G mobile networks, as well as the 5G networks that are starting to be rolled out now across the globe.

These are interesting times, and it’s exciting to see Infinera at the forefront of this trend, leading from the front with a strong push into disaggregated IP built on a foundation of 25 years of history in IP for mobile networks.