In the first half of 2021, Infinera sponsored a primary research project with ACG Research regarding the potential impact of open optical networking on the evolution of service providers’ transport networks.

The survey and interviews focused on three three key areas: 1) motivations and barriers, 2) adoption and timing and 3) automation enablement. While I encourage you to read the full report which is available here on our website, I will utilize the remainder of this blog to highlight some of the key findings in each of these areas.

The Next Five Years are Hotter Than You Might Expect

We have all seen various reports about increasing traffic demands on our networks. In the era of Covid-19, we also know from our own experiences how important our networks are to us individually and our families – not only for entertainment but for remote learning and work-from-home. But what do service providers think the next five years of traffic growth look like in various segments of the network? That’s one of the questions that was asked in the survey. The results might be hotter than you expected. All network segments projected between 46% and 39% anticipated annual growth through 2025. The edge of the network with residential broadband and metro are leading the way with data-center interconnect not far behind. While growing slower than the metro/edge, respondents still anticipate considerable growth in the long-haul and core parts of the network.

High anticipated traffic growth provides a strong motivation for service providers to reassess their network architectures and embrace open optical networking to cost-effectively meet these capacity demands. But what benefits do service providers expect to obtain by embracing open optical networking? In our Infinera discussions with service providers and in prior research in this area, the Top-3 responses are consistent (while the order may be different):  Faster Innovation, More Choice and Improved Economics. This report only reinforces these findings.

A failure to embrace open optical networking can result in the exact opposite situation where service providers have slower innovation, less choice and worse economics. By not opening the optical transport network to more choices, network operators may also miss out on key benefits like improved transmission performance in the next round of pluggable or embedded optical engine technology – thus hampering their overall networking competitiveness.

The Need for Speed with 800G Optical Engine Adoption

The research also explored the anticipated timing for adoption of 400G pluggables as well as 800G embedded optical engine technology. Infinera’s 2x800G ICE6 optical engine has seen a steady stream of new wins and deployments around the globe including most recently with stc in the Middle East, Telstra in Asia-Pacific and Sparkle in Europe. Fully 78% of respondents anticipate the deployment of 800G optical engine technology by the end of 2022. While the primary target of the research was communication service providers (CSPs), webscale providers made up approximately 10% of respondents. All of them plan to deploy 800G optical technology by the end of 2022. These results further reinforce the early adopter mindset, behavior and impact we have come to expect from webscale providers. 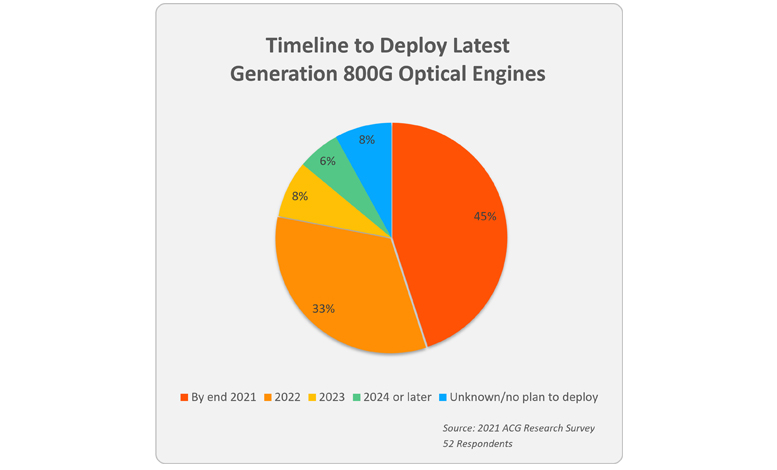 Automate to Reach your Full Potential

From this report as well as in prior research, we know that increased operational complexity is one of the top barriers or fears holding service providers back from fully embracing open optical networking. So, what’s the antidote? The answer is of course increased software automation. In an earlier 2021 blog titled “Is Your Network Ready for Open and Disaggregated?”, I expressed concern about the potential lack of investment in SDN control and software automation holding back our transport networks from realizing their full, open optical potential. It is encouraging that in this research fully 78% of respondents indicate that they will have deployed SDN control in their optical transport networks by the end of 2022 including 63% that already deployed in 2021 or earlier. 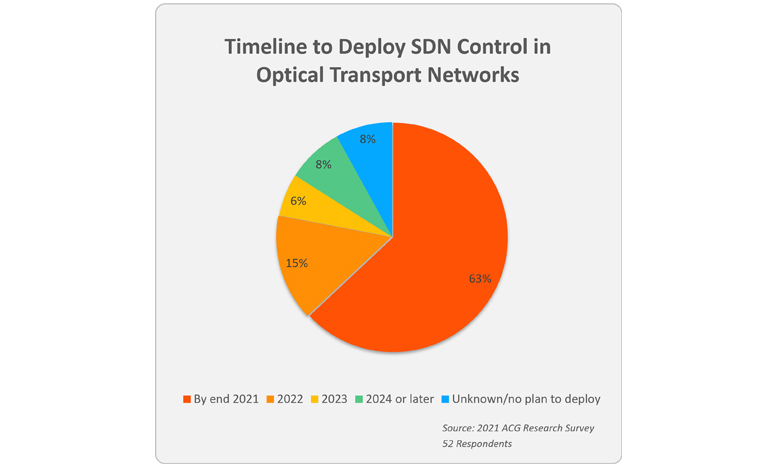 So, let’s wrap this up by looking at one of the comments made during the private interviews ACG conducted to get more depth and perspective than a survey will allow. When asked about introducing 800G technology to their network, an IP & Optical strategist in the APAC region gave the following response: “We have production tested an 800G solution, trialed it, and we’re going through type certification and getting ready for deployment reasonably soon. 800G rides quite well with what we’ve got; it’s not a big forklift or anything. It also integrates with what is currently on our optical line systems, we will mix them.”  The benefit of open optical networking in this response is what stands out most to me. They can introduce 800G optical engine technology and access the benefits of higher performance including increased wavelength capacity-reach and spectral efficiency while operating over their existing optical line system. With network capacity demand doubling almost every two years and a growing need to cost-effectively transport 400G client services, ready access to the latest optical engine technology has never been more important.

I look forward to seeing you on a webinar or hopefully an in-person (fingers crossed) event soon.

Compact Modular and Carrier Grade: The Match We’ve Been Waiting For