Multiple coherent technology evolutions have driven down cost per bit, power consumption, and footprint while increasing spectral efficiency and fiber capacity. The first evolution was from 40 Gb/s to 100 Gb/s, followed by the transition from hard-decision forward error correction (FEC) to soft-decision FEC. Then came a “200G generation” with flexible rate interfaces enabled by higher-order modulation,  followed by a 400G generation with higher baud rates and additional modulations that enabled 400 Gb/s wavelengths. Recently, a 600G generation has emerged with even higher baud rates, enabling both 600 Gb/s wavelengths and enhanced capacity-reach at lower wavelength speeds. While 800G generation coherent and 400ZR pluggables may be grabbing a lot of headlines, now is the perfect time to deploy 600G generation technology. Here are my top five reasons why:

Number 1: It Is Available Now – at Volume

While 800G technologies such as Infinera’s ICE6 optical engine promise many benefits and have shown impressive trial results, the reality is that this technology is not likely to be available at volume until early 2021. Likewise, even with 400ZR samples being demonstrated in the first half of 2020, volume is forecast to be low until late 2021. Faced with strong traffic growth and pressure on revenues and margins, many network operators cannot wait and need to improve their network economics now. Furthermore, implementing new technologies also requires time for testing and integration. The 600G generation CHM2T sled for the Groove (GX) G30 has been shipping since 2019 and is now available at volume, ready for immediate testing, integration, and deployment.

Number 2: You Can Dramatically Lower Your Cost per Bit

The primary driver for cost per bit is how much bandwidth you can get out of an interface for a given reach requirement. More bandwidth equals fewer interfaces equals lower cost per bit. Higher baud rates enable higher-bandwidth wavelengths with a minimal reduction in reach. 600G generation coherent increases the baud rate to up to 72 Gbaud, compared to 45 to 56 Gbaud with 400G generation and around 30 Gbaud with earlier generations. This has enabled Infinera’s GX G30 CHM2T sled to demonstrate 600G at 250 km, while 400G distances of up to 2,000+ km and 200G distances of up to 7,500+ km can also be achieved with margin for real network deployments. This compares with published 400G generation claims of 300 km for 400G, 1,500 km for 300G, and 4,000 km for 200G. The bars in Figure 2 compare the interface capacities for 400G and 600G generations over a wide range of distances, with the approximate 600G cost per bit savings represented by the curve and ranging from 27% to 40%.  For a typical network, cost per bit savings of around 33% can be achieved. 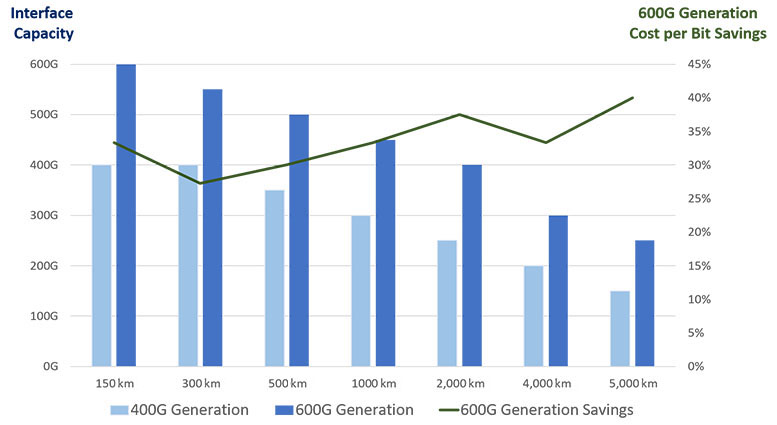 Compact pluggable form factors such as QSFP-DD are making 400 GbE an attractive option for routers, with network operators seeing increasing demand for 400 GbE transport both as an internal service interconnecting their own routers and as a service for wholesale and enterprise customers. Transporting 400 GbE over a single wavelength is far more cost-effective than multi-wavelength solutions such as 400 GbE over two 200G wavelengths. The GX CHM2T sled can transport 400 GbE over a single wavelength at distances of over 2,000 km. To put this 2,000-km figure in perspective, in a recent study of a North American operator’s long-haul network, more than 70% of network links were under 2,000 km. Need to go beyond 2,000km, the CHM2T can leverage its dual wavelength DSP to deliver a 400GbE over two 200G wavelengths at distances to 7,500+ km, as shown in Figure 3.

And for shorter distances, the dual-wavelength DSP enables the GX CHM2T to transport three 400 GbE services over two 600G wavelengths, as shown in Figure 4, providing a 33% cost savings compared to using a 400G wavelength for each 400 GbE.

Number 4: You’ll Help Save the Planet – and Reduce Your Energy Bills 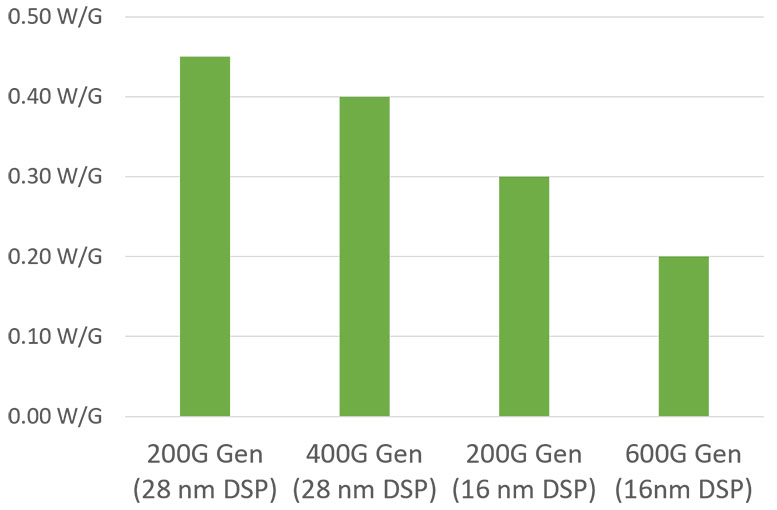 600G technology can also save valuable rack space. With two CHM2T sleds in the GX G30, you get 2.4 Tb/s of coherent line interfaces (4 x 600G) and 2.4 Tb/s of client interface capacity (24 x 100 GbE/OTU4 QSFP28, 6 x 400 GbE QSFP-DD) in 1 rack unit (1RU). The line interfaces can be used for both muxponder and 3R OEO regeneration functions. Need wire-speed Layer 1 encryption? That is supported too, with no reduction in capacity. 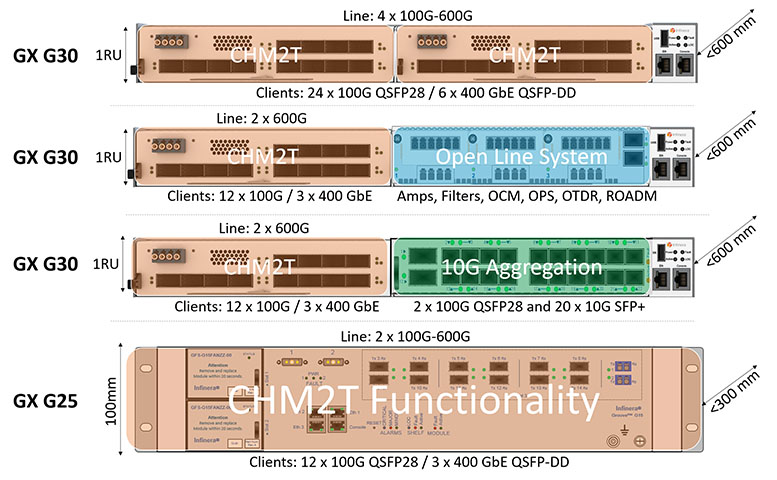 Don’t need a full 4.8 Tb/s? Well, with the GX G30 you can put a single a CHM2T in half of the 1RU G30 shelf and open line system functions, such as amplifiers, filters, OTDR, optical channel monitoring, optical protection switching, or even a ROADM, in the other half. Or, if you need 10G clients, you can put a 10G aggregation sled in the other half for 20 x 10G SFP+ interfaces and two 100G QSFP28 interfaces, as shown in Figure 6. Constrained by racks with 300mm depth? The GX G25 provides the full functionality of a single CHM2T in an ETSI-compliant form factor. 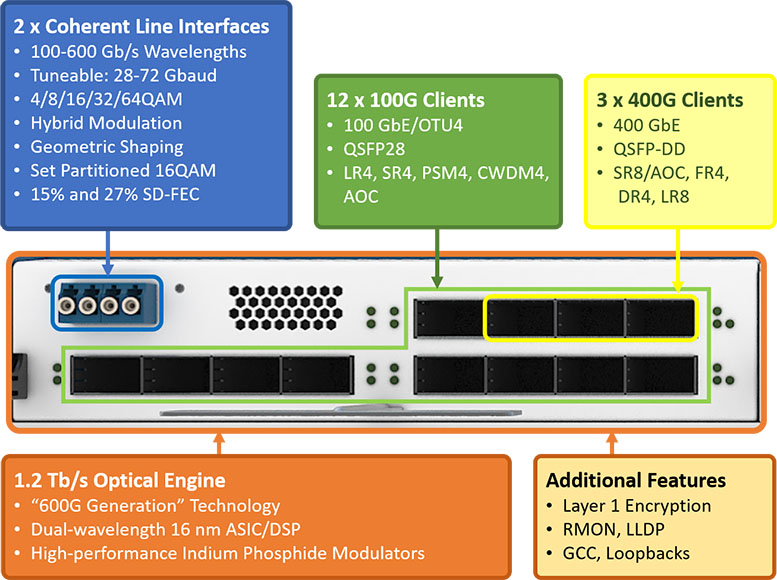 So to summarize, if you want to slash your cost per bit, efficiently transport 400 GbE services, and cut your energy bills with a compact and flexible form factor, the 600G generation CHM2T sled for the GX G30 is available now – ready for testing, integration, and deployment.