It may surprise you to know that data passing between the Iberian Peninsula and Latin America today will most likely take a very indirect route – from Europe to the U.S. and then down to Brazil. But this is soon set to change with the launch of the new EllaLink express optical platform that offers a direct route via a high-capacity submarine cable from Sines in Portugal to Fortaleza in Brazil.

Last week I was lucky enough to participate in the season finale of EllaLEAKS, a series of films that have helped to document the whole construction process. It was an amazing event, and I was able to talk about the project with EllaLink’s Chief Marketing and Sales Officer, Vincent Gatineau, afterwards.

Geoff: It’s great to talk to you, Vincent, and thank you for the invitation to get involved in the EllaLEAKS finale event. I have to say, having experienced so many virtual webinars over the past year, I thought it was a really great event, with a fantastic look and feel, and very professionally produced. Congratulations!

Vincent: Thank you, Geoff. It was thanks to a lot of hard work by so many people, and we’re delighted with the number of attendees at the live event. As you mentioned, we also have the whole series of films online for people to check out, and I think it’s really interesting to see the process of laying the cable, building the landing stations, and so on. We look forward to next season, which will kick off with more stories from our partners.

Geoff: Could you summarize EllaLink for us all?

Vincent: Sure. We start with a high-performance submarine cable with four fiber pairs on the trunk that follows a direct route from Portugal to Brazil. But a key aspect is that this is about joining two sets of communities that share common languages and cultures – predominantly Portuguese and Spanish, of course. The cable has been installed with a number of branching units, and will initially connect to Cabo Verde and Madeira. The system has also been designed to accommodate future subsea extensions to the Canary Islands, Morocco, Mauritania, French Guiana, and Southern Brazil. Using our fiber ring, we can connect to Madrid and Lisbon and extend to Marseille, where we hook into the massive Mediterranean cable systems that take us to the Middle East and onward to Asia. People can check out these routes on the interactive Telegeography Submarine Cable Map. 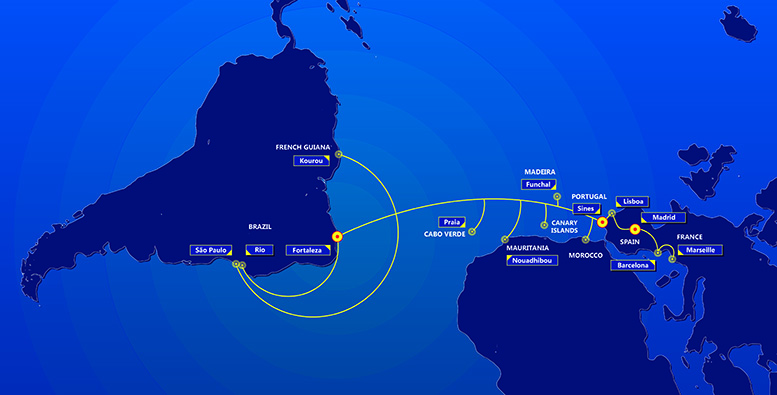 Geoff: Low latency was a big theme of the webinar…why is it so important?

Vincent: It’s about the way people are using networks today. We often think of financial trading needing low latency, but online gaming is growing rapidly across the Latin Americas region, and gamers these days are playing with other people from around the world. The response times for social media applications are also critical because of the way these applications are funded through online advertising. As said by our good friend, CEO of DE-CIX Ivo Ivanov, “latency is the next currency.”

Geoff: And how much of a reduction can you achieve? After all, we’re ultimately limited by the speed of light.

Vincent: Yes, and that’s why our direct routing is critical. To make use of high-capacity cables, data today has to go from Europe to the U.S. and then down to Brazil.  The EllaLink route is only half the distance, so that means half the latency – we’re looking at less than a 60-ms round trip delay between Portugal and Brazil. We also offer direct, all-optical connections from data center to data center, glassing through at the landing station and avoiding any added latency from OTN switching. And our ability to do that is really enabled by the high performance we’ve seen from Infinera’s ICE6 technology.

Geoff: Yes, I think the performance of ICE6 has been a revelation in so many cases. What are you expecting for the cable system?

Vincent: The conservative estimate is for an end-of-life cable capacity of about 100 Tb/s on the trans-Atlantic section, and that’s 25 Tb/s per fiber pair. We can also support a range of services from 1 GbE up to 400 GbE, and we offer an open cable solution, with what will look like a virtual fiber pair to a customer. They can choose whichever transponders they wish, but the spectrum will be managed and kept stable by the Infinera Intelligent Power Management solution.

Geoff: In fact I wrote a blog about the importance of active power management that people can refer to here. You mentioned glassing through at the landing station. Wouldn’t it be easier to just put the data center where the cable lands?

Vincent: This point very much relates to which came first, the cable or the data center? Is the cable system being built to bring connectivity to an underserved area, in which case it comes before the data center, or are you building a cable system to connect into existing data center infrastructure? So glassing through at the landing station is ideal, but not possible for every system. There is a symbiotic relationship between data centers and cable systems, and in the case of EllaLink, Fortaleza is an area already rich in cable connectivity, and in Sines we deliberately selected a new site to offer diversity from the existing cable systems landing in Portugal. Where you have a busy landing location, there can be a danger of cables crossing in shallow waters and exposing the cable to hazards like anchors or fishing nets. We took a lot of care in Sines to make sure that we only cross other cables in deep ocean locations. Where we needed extra shallow water protection, we used a technique called horizontal directional drilling (HDD) to help protect the cable by burying it deep under the seabed.

Geoff: I saw the video you posted on the HDD technique, and also the construction of the cable landing station at Sines – it’s really an amazing engineering project. And I know you also have a lot of research and educational involvement on EllaLink.

Vincent: We do. One of our major anchor customers is the BELLA Consortium, who provide for the long-term interconnectivity needs of the European and Latin American research and education communities. I’m also excited to say that GÉANT and EMACOM have established the EllaLink Geolab, an initiative that aims to provide the scientific community with real-time, accurate, and relevant data on seabed conditions along the cable route. EllaLink is the first commercial telecoms submarine cable in the world to integrate SMART cable concepts into its design.

Geoff: It’s fascinating stuff, and applications like earthquake monitoring would have the potential to save so many lives, especially as sea levels rise due to climate change. Vincent, thank you for the opportunity to participate in the season finale, and congratulations on an incredible submarine network project!

Vincent: Thank you, Geoff, and I’m looking forward to a long partnership with Infinera. 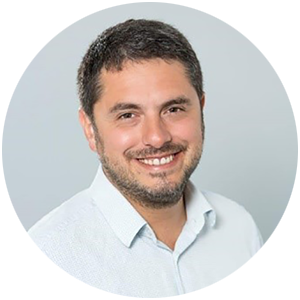 Vincent Gatineau is the Chief Marketing and Sales Officer for EllaLink.  Vincent was part of the Sales & Marketing team of Alcatel Submarine Networks for nine years, followed by the EllaLink project since its first days among other major systems developments. Previously, Vincent has held various international positions within the Alcatel-Lucent group in India and Chile.  Vincent has an engineering degree from Institut Mines Telecom Lille Douai. He is fluent in French, English and Spanish. Infinera thanks him for his contribution.