It appears that the stars have now aligned for multi-vendor, open, and disaggregated optical networking. Open APIs with YANG-based data models, compact modular platforms with microservices-based operating systems, high-performance coherent transceivers, and standards initiatives from the ITU-T, Open ROADM MSA, Open Networking Foundation, and Telecom Infra Project have all come together to enable optical networks where coherent transponders/muxponders from one or more vendors can run over an open line system from a different vendor. Benefits include accelerated innovation, optimized and differentiated networks, and transformed economics.

But is this really new? Haven’t we been talking about “alien wavelengths” and “open line systems” for years now? The reality is that open optical networking did not happen overnight. The optical industry has been taking incremental steps toward open, multi-vendor optical networks over the last 20+ years. Here is a list of some of the key milestones on that journey.

Having originally been specified for SDH by the CCITT, the precursor organization to the ITU-T, ITU-T Recommendation G.709 (2001/02) “Interfaces for the Optical Transport Network” marked the beginning of the Optical Transport Network (OTN) era. It specified how the overhead, sometimes referred to as the “digital wrapper,” provides the functionality to support the operations, administration, and management (OAM) aspects of the OTN.  It also specifies the frame structures and bit rates used in the network (2.5G, 10G, and 40G) and the mapping of client signals into it. The frame structure made provision for carrying (optional) forward error correction (FEC),  while an annex described a first-generation Reed-Solomon (255,239) FEC. G.709 has been revised and amended multiple times since 2001; the current in-force G.709 (2020/06) now includes signal rates at 25, 50, and N x 100G.  FEC technology in the OTN has advanced significantly with the introduction of second-generation (super FEC) codes for submarine use in G.975.1 (2004/2) and the appearance of third-generation FECs (CFEC, OFEC) in the G.709.x companion recommendations to G.709.

A network using wavelength-division multiplexing requires a channel assignment scheme so the transceivers know what wavelength they may use and the spectral width of the signal they may transmit to avoid interfering with other users of the network. We do this by specifying a “frequency grid,” so the second important step on the road to open optical networking was the 2002 specification of a fixed-frequency DWDM grid in ITU-T G.694.1. Ten years later, in 2012, a revision added definition for a flexible grid. In 2020, definitions for “frequency slot” and “slot width” for flexible grid networks were added.

A key motivation for open optical networking is that it allows operators to source network components from multiple vendors. One aspect of this is multi-vendor interface interoperability, what the ITU-T SG15 refers to as “transverse compatibility.” To enable this, the ITU-T specifies a “black link” approach with “application codes” (AC) for transceivers, the idea being that regardless of origin, two devices bearing the same AC are guaranteed to interoperate when connected over an optical channel that also conforms to the AC specification. The 2005 ITU-T G.698.1 recommendation specifies ACs for 2.5 Gb/s and 10 Gb/s wavelength signals in unamplified point-to-point DWDM systems using a 100 GHz grid enabling reaches in the 30 to 80 km range.  A 2006 revision of the recommendation allowed for the inclusion of OADMs in the link and provided a means to calculate the number that could be accommodated. In contrast to G.698.1, which dealt only with unamplified links, G.698.2 specifies ACs for systems containing amplifiers. Beginning with 2.5G and 10G NRZ modulation, G.698.2 now covers coherent 100G applications with third-generation FECs as specified in G709.2 and G.709.3.

Network Configuration Protocol (NETCONF) is a network management protocol and key enabler for open APIs. The IETF first published NETCONF as an RFC (RFC 4741) in 2006. It then updated NETCONF with RFC 6421 in 2011.

YANG is a data modeling language used to write network element configuration and state data models for protocols such as NETCONF and RESTCONF, and as such is also a key enabler for SDN and open APIs. The IETF published YANG 1.0 (RFC 6020) in 2010, followed by YANG 1.1 (RFC 7950) in 2016.

Having first defined the requirements for transport SDN in 2013, the Optical Internetworking Forum (OIF) then published a transport SDN framework in 2015 that compared the then-emerging SDN architecture with established ASON control planes and identified candidate open interfaces for SDN control of optical networks.

The Open Networking Foundation (ONF) was formed in 2011 with an initial focus on SDN, including OpenFlow. In 2014 they launched the Transport API (TAPI) project to create a standard for the northbound interface from a transport SDN controller. In 2016, TAPI 1.0 was published in partnership with OIF, its release being timed to align with a 2016 joint OIF/ONF interoperability demonstration. In 2017, ONF, OIF, and MEF jointly released TAPI 2.0, followed by TAPI 2.1 in 2018. In 2020, TAPI 2.1.3 interoperability testing concluded with participation by multiple vendors, including Infinera.

OpenConfig, an informal working group of network operators, was formed in 2015 with the goal of moving networks toward a more dynamic, programmable infrastructure, using software-defined networking principles, with a focus on common data models and streaming telemetry.

An open line system is an optical line system (mux/demux filters, wavelength selective switch, amplifiers, etc.) that can support wavelengths generated from third-party devices, with some definitions making open, SDN-based management a mandatory requirement. As with the term alien wavelength, the exact date this term entered the lexicon is hard to pin down. However, Google Scholar gives a first reference to the paper “SDN Control of a Coherent Open Line System” by Microsoft in 2015.

The Open ROADM MSA was formed in 2016 with the aim of producing specifications for multi-vendor interoperable ROADM networks. The MSA publishes optical specifications for data-plane interoperability, including transponders, OTN switches, and pluggables and associated open APIs and YANG data models. The first specifications were for a 100 Gb/s G.698.2-compliant transponder and a colorless-directionless fixed-grid ROADM. In 2017, OTN xponder/switch, inline amplifiers, and flexible grid were added. In 2018 additional signal rates(200 Gb/s, 300 Gb/s, and 400 Gb/s) were added together with OTUCn and FlexO. In 2019, ODUflex, 400G clients, low noise amplifiers, streaming telemetry, and bookended transponders were all added to the specifications.  Open ROADM was the first organization to adopt the appropriately named Open FEC (OFEC) as the FEC for line rates beyond 100G.

Telecom Infra Project (TIP) was founded by Facebook in 2016 as a diverse community working together to develop, test, and deploy open, disaggregated, and standards-based solutions. The Open Optical & Packet Transport (OOPT) group within TIP, which works on the definition of open technologies, architectures, and interfaces in optical and IP networking, was also formed in 2016, with Facebook contributing the Voyager open packet DWDM transponder platform design.

In 2016, Coriant, which was acquired by Infinera in 2018, evolved Infinera’s original transponder appliance concept with a compact 1RU device with four slots for sleds, the Groove G30, creating a new category for optical equipment – compact modular.

First appearing as an internet draft in 2013,  RESTCONF provides a subset of NETCONF functionality implemented on top of HTTP/HTTPS. It became an IETF standard (RFC 8040) in 2017.

In March 2020, TIP’s OOPT group published specifications for the Phoenix 400 Gb/s wavelength-capable disaggregated and open optical transponder, with Infinera selected as one of six vendors in July 2020.

So, to summarize, while no one thing was sufficient by itself to enable open optical networking, the cumulative effect of these many initiatives over the last 20 years has brought us to a place where open optical networking is now a practical reality. To learn more about this important topic, download the new Infinera Open Optical Networking solution note. 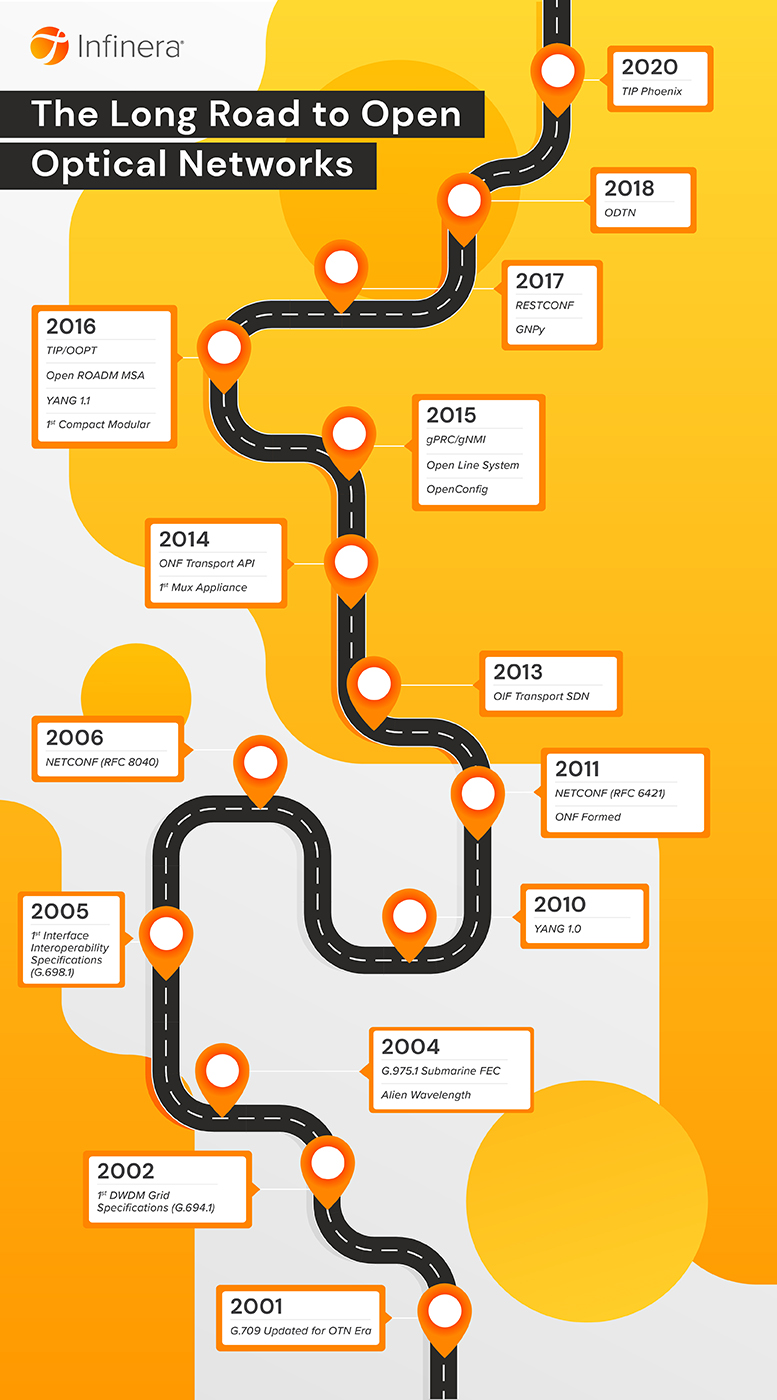 To view a larger image of the infographic, click here.

TIP Project Phoenix Getting Some Lift in 2021