The Link Between Networks and The Olympic Games

To quote Jacques Rogge, President of the International Olympic Committee, “Our world today is in need of peace, tolerance and brotherhood. The values of the Olympic Games can deliver these to us. Athletes of the 80 National Olympic Committees, show us that sport unites by overcoming national, political, religious and language barriers. It can show us a world we all long for.”

You may ask, “What does this have to do with telecom?”

In telecommunications and transport networks there are different layers of technologies and different standards. IP technology, packet technology, and optical transport technology all have specific roles in our networks. The protocols and data models of these functions differ – IP systems typically follow different models than packet systems and both support different models than optical transport devices. They all have come a long way, and many vendors have driven the evolution of protocols and data models with their own specific implementations. This is also an important area for innovation and differentiation.

Digital transformation, the Internet of Things (IoT), and 5G are enabling, as well as driving the need for IT-like operation in transport networks. Increasing efficiency, enabling improved interworking, and automating ever more complex multi-vendor networks, with all their different protocols and data models, is very cumbersome and complicated.

Now more than ever before, all these different technologies need to come together, communicate, and interwork jointly based on a standard, defined set of rules.

This is why we have recently seen increased interest in common data models as defined by OpenConfig or Open ROADM, data modeling languages like YANG, and common protocols such as NETCONF and RESTCONF. They enhance interworking and automation to make implementation significantly easier and faster. 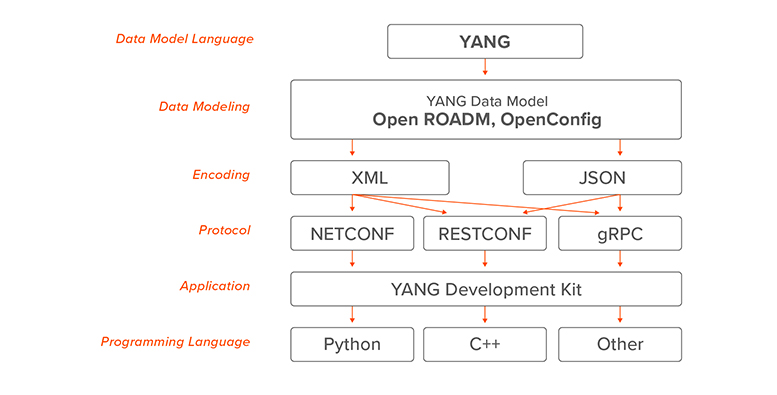 In fact, this is what we see our customers implementing and utilizing with the Infinera Groove (GX) Series platform that supports these data models and common APIs.

I think it’s fair to say that as we still want diversity, differentiation, and innovation, some proprietary implementations will always be of great value as they can save costs significantly.

One good example is the forward error correction (FEC) implementation of the Open ROADM Multi Source Agreement (MSA) in optical engines. If you look at the OpenFEC implementation that the Open ROADM MSA uses, with around 11% FEC at 100G, 15% at 200G, and 21% at 400G, the performance of the solution will be significantly lower than the enhanced proprietary SD-FEC implementation in innovative and state-of-the-art optics such as Infinera’s Infinite Capacity Engine (ICE), which offers significantly higher FEC gain as well as additional capabilities such as FEC gain sharing.

OpenFEC, as the common denominator that took some time to get defined, will enable solutions from different vendors to be interconnected and interoperate, but in many cases, it also will be more expensive to deploy in networks, as its signal travels shorter distances, and thus many links will require expensive and power-hungry signal regeneration compared to more advanced optical engines like ICE that can go farther.

Nonetheless, some functions should and will be made common, especially when it comes to network analytics and network operations, including network programming. Just like in the Olympic Games, the communication, set of rules, measurement standards, etc. are common to all participants.

The differentiation is in the individuals and their capabilities. For example, you could call Infinera’s ICE a top world-class athlete, a gold medalist, a world record holder, whereas OpenFEC is a team player that may play a crucial role on your team, but will not win the gold medal on its own.

To enable IT-like transport network operation and fast implementation of network automation in complex networks, it is obvious that common data models and a common communication protocol will be of high value.

As networks are becoming more complex and as we need to increase network efficiency, it is important that we all implement common data models and protocols in our products. This will enable transport networks to be easier and faster to manage, as well as to be more dynamic and automated, offer better interworking, and be enabled for machine learning.

The Olympic Games bring all of us together in peace, tolerance, and brotherhood. Telecommunication transport networks bring together all the technology that needs to interwork, today more than ever before. We want jointly to embrace and celebrate differentiation while enabling common communication and interworking and close industry collaboration.