Regular readers of the Infinera blog will know that as a company, we are very engaged with the industry analyst community, helping to drive primary research into the trends that shape our industry. One of our most recent activities in this area has been joining Heavy Reading’s Sterling Perrin and other sponsors as part of Light Reading’s Market Leader Program (MLP) research project into 5G transport evolution.

5G is undoubtedly one of the hottest topics within our industry at the moment. Network operators across the globe are rapidly rolling out new 5G cell sites, and in many cases also deploying new spectrum to increase 5G capacity and capabilities. Consequently, network operators are upgrading their optical transport networks to support the new architectures and higher performance requirements needed for 5G. This MLP project surveyed 81 decision makers from network operators running 5G networks, giving great insight into their plans for 5G transport. The survey addressed some of the most pressing 5G-related operator strategies, including Cloud RAN and vRAN, multi-access edge compute (MEC), 5G synchronization and timing distribution, traffic growth expectations, and network slicing architectures.

As part of the project, Sterling has produced a detailed white paper that reviews all the results of the survey. In the remainder of this post, we’ll look at a couple of the report’s key findings.

The Importance of Single-fiber Working in Mobile Transport

Single-fiber working (SFW), also referred to bi-directional or “bi-di” optics, is very common in access networks, with residential PON networks, for example, being built using single-fiber infrastructure. We also see SFW as a requirement in some DWDM access networks, most commonly in the mobile space. So, we were interested in gauging the level of importance that operators placed on SFW for 5G fiber-to-the-tower deployments, which could be fronthaul, midhaul, or backhaul depending on which RAN devices the operator had deployed at the tower site. While we anticipated some reasonable importance for SFW in 5G networks, the results exceeded our expectations. 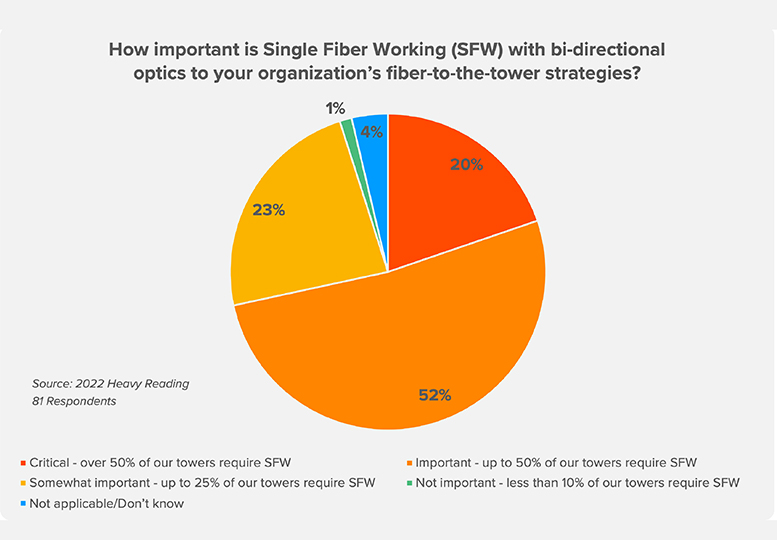 SFW in the Coherent Era

This result is critically important as we scale DWDM access networks to support the higher rates that 5G will require. 5G is intended to drive up both the average bandwidth demand per user and the number of users in a cell – you’ll have heard the various 10x, 100x, 1000x goals that the industry has discussed for 5G targets. The xHaul architecture also uses eCPRI in the fronthaul domain, which drives up traffic approximately fivefold versus backhaul traffic volume due to the processing split between the radio unit (RU) at the cell site and distributed unit (DU) deeper into the network. So, a site requiring 10G of backhaul could require up to 50G of fronthaul in an xHaul architecture. As a quick side note, this ~5x figure is a lot better than the ~30x fronthaul/backhaul ratio that we see in 4G fronthaul using CPRI, which is essentially a digitized RF signal. So, a combination of higher traffic per 5G user, more connected users, and the migration to xHaul will drive up traffic in mobile networks very quickly.

We have a couple of proof points for this bandwidth growth. In the MLP report, we see significant growth in the planned use of higher-speed 25G and 100G optics in 5G xHaul to support this higher bandwidth. In addition, in 2021 another piece of primary research from ACG revealed that the surveyed operators anticipated the five-year traffic growth in their mobile networks to be 43%. To put a 43% compound annual growth rate into perspective, this means that traffic growth will be 10 times today’s traffic in approximately 6.5 years.

So, we see rapidly rising traffic demand in a portion of the network where 72% of the surveyed network operators believe SFW is important or critical to their plans. These rising traffic levels will soon push DWDM optics from 10G direct-detect optics into the coherent domain with 25G and above. Direct-detect 10G DWDM optics are easy to deploy over SFW using bi-di optics that use different wavelengths for the upstream and downstream traffic over the single fiber. But standard coherent optics have a real challenge with SFW as they use a single laser source to act as the reference frequency for both the transmit and receive optics, which locks both to the same wavelength. Network operators will therefore have to find a way to support SFW once they hit bandwidth levels that require coherent optics, as standard coherent optics can’t meet these requirements.

XR optics provides network operators with an ideal solution to this challenge. In an SFW environment, the technology is able to use the digital subcarriers in a bi-di mode, where some subcarriers are used upstream and some downstream to support the application. This mode of operation also supports both symmetrical and asymmetrical traffic flows, which opens up some interesting optical networking possibilities for mobile network operators. XR optics pluggables will also be available in temperature-hardened variants and support bandwidth in 25G increments, both of which help the technology fit nicely with the fiber-to-the-tower xHaul environment.

Operator Drivers for MEC and the Edge

The second area of the report that we’ll take a quick look at today is “the edge” and MEC. Whatever your opinions of the U2 guitarist, the edge is becoming a significant trend in telecoms. The MLP survey addressed the edge and MEC with a few questions. One interesting finding was an almost equal split between low-latency services and virtualization of 5G RAN functions as the initial applications driving edge computing in operators’ networks, as shown in Figure 2.

These drivers have an impact on where operators will plan to deploy edge computing resources within their networks. Those targeting virtualized RAN functions are likely to prioritize DU and centralized unit (CU) sites to support virtual DU (vDU) and virtual CU (vCU) functions. Those targeting low-latency services are likely to have differing strategies depending on the type of services they intend to deploy. To support general availability of low-latency services across the whole network, operators will  gradually introduce edge computing, pushing processing from the core toward the edge of the network as the business case justifies it. Given this approach, we would expect to see more initial edge computing deployments in CU locations or closer to the core.  However, the results in Figure 3 are counter to that, with the highest response rate for initial deployments being at the very edge of the network or at the RU.

One possible explanation for this high RU site response is that recipients answering this question considered MEC deployments at a smaller number of very specific and very strategic RU sites, such as sports stadiums and large enterprises, to support targeted low-latency services for these locations. With that frame of mind, then the results in Figure 3 make a lot more sense.

To wrap up, this has been another interesting MLP project with Heavy Reading. Data like this can highlight some very important trends that operators see and vendors need to address. If you want to learn more about this project, then you can catch the replay of the project webinar here, and we’ll share the in-depth report as soon as it is available

5G Slicing and Dicing the Network