The first generations of coherent transmission used polarization-multiplexed quadrature phase-shift keying (PM-QPSK), sometimes referred to as PM-4QAM. Each of the two orthogonal polarizations of light (X-polarization, Y-polarization) uses 4 constellation points to transmit 2 bits for a total of 4 bits per symbol, as shown in Figure 2.

However, conventional QAM comes with several limitations. The first limitation relates to reach. With the same baud rate, doubling the data rate by going from PM-QPSK to PM-16QAM requires a fourfold increase in the number of constellation points.

This squashes the constellation points closer together for the same average power, making them harder to distinguish in the presence of noise and other impairments. However, every time we double the number of bits per symbol, there is a diminishing return in terms of the data rate gain. PM-16QAM to PM-64QAM only increases the data rate by 50%, and PM-64QAM to PM-256QAM only increases it by 33%, as shown in Figure 3.

PCS provides the option of fine granularity, enabling a far smoother curve than traditional modulation. In practice, the need for useful data rates will limit granularity to fixed increments of 25 Gb/s or 50 Gb/s.

Even with these increments, PCS can better maximize the number of bits per symbol than traditional QAM, with much smaller step change drops in capacity. Even if there were no other benefits, the enhanced granularity of PCS would greatly increase capacity and spectral efficiency in scenarios where the reach requirement was just beyond the capabilities of the higher-order modulation, as shown in Figure 5.

This increase in noise tolerance comes with no increase in nonlinearities, which are a function of the average power of the wavelength and its spectrum (i.e., the power spectral density), and takes us closer to the Shannon limit, as shown in Figure 7.

Alternatively, for the same noise tolerance, less power is required, and therefore nonlinearities are reduced. Both cases provide the ability to increase wavelength capacity/spectral efficiency and/or reach.

Figure 7: PCS takes us closer to the Shannon limit

A third benefit of PCS is that it provides the option to choose the optimal baud rate and then use PCS to get the desired wavelength speed. As a general rule, when it comes to baud rates, the higher the better. Higher baud rates maximize wavelength capacity-reach, reducing cost, footprint, and power consumption.

However, the limited granularity of traditional QAM-based modulation provides far less flexibility when selecting the baud rate. For example, for a wavelength data rate of 800 Gb/s (i.e., the transport of 8 x 100 GbE clients) with an overhead of 20% for forward error correction and physical layer functions, we need a raw transmission rate of 960 Gb/s.

But what if we have an optical engine that is capable of 90 Gbaud but not 96 Gbaud? With conventional modulation, we would have to use 80 Gbaud, forgoing the benefits of the extra 10 Gbaud of which the optical engine is capable.

With PCS, we can dial up the baud rate to 90 Gbaud, which provides the baud rate overhead for PCS to shape the probability density function of the constellation points, dialing down the modulation to 10.67 bits/symbol and thus enabling much greater 800G reach.

This benefit can also apply to lower baud rate use cases such as fixed grid networks and transoceanic submarine, letting us choose the optimal baud rate and therefore spectral width of the wavelength and then using PCS to get the desired wavelength speed. 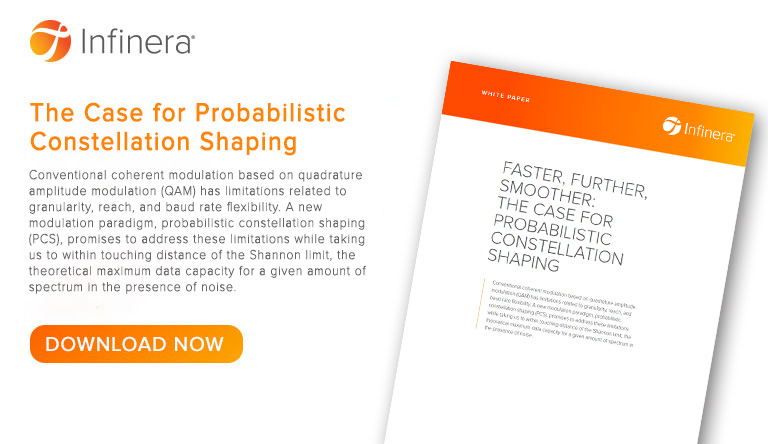