Submarine cable systems are a modern miracle of technology.  A cable like MAREA can carry over 24 Tb/s per fiber pair across 6,640 km of the Atlantic Ocean.  With over 400 operational submarine cables worldwide, they really do connect the world at light speed.

Along the length of these cables we find the telltale bulge of the optical amplifiers, looking like small animals that have just been swallowed by a boa constrictor. Just like amplifiers in terrestrial systems, these devices boost the power of the optical signal just enough – but not so much as to create unwanted nonlinear effects.

A key thing to understand about submarine amplifiers is that they operate in constant power mode, as opposed to a typical terrestrial amplifier chain that operates in constant gain mode.  Each of these applications has its reasons for operating this way.  In a terrestrial network, there may be multiple optically meshed paths in the network with a complex set of power levels per fiber, with the risk of a link break throwing those power levels out of balance.  Fortunately, distances are usually much shorter than in a submarine network, with more tolerance to rapid configuration changes, and this allows us to implement control loops within the amplifiers themselves.

In a submarine network, the emphasis is on the power management of the amp chain, with a comparatively narrow amplifier window that is precisely balanced for optimum optical signal-to-noise ratio (OSNR) without exceeding the nonlinear threshold.  Deviation from this balance in a submarine amplifier chain will have a serious impact on signal quality.  Moreover, in failure conditions where cables are spliced, this precise balance has to be restored, and this is the basis of submarine power management.

Figure 1 shows one of the major consequences of this.

Figure 1A shows a set of eight wavelengths that have suffered attenuation and are at low optical power levels.

After they pass through the amplifier, they are all boosted, ready to continue the journey.  Each wavelength will have experienced a certain level of gain (the ratio of the output power to the input power) from the amplifier.  The dotted line represents the nonlinear threshold for this fiber, which means that if we increase the gain of any wavelength, or multiple wavelengths, above this threshold then they will experience nonlinear penalties and reduced optical performance.

In Figure 1B we see the same amplifier, but three of the eight wavelengths have disappeared for reasons I go into below, so there are now only five wavelengths on the fiber.  Let’s assume the amplifier is configured to deliver the same total power as before, but now it is spread over fewer wavelengths and will, therefore, produce more gain, which may result in nonlinear penalties.

So, what could cause a submarine cable to “lose” wavelengths as we see in Figure 1?  Figure 2 shows one possible cause.

Figure 2: Example of wavelength loss in the terrestrial backhaul network

In this case, the cable operator has chosen to “glass through” at the cable landing station and onward to the terrestrial backhaul network.  This term refers to using a ROADM in the cable landing station instead of a digital termination such as an OTN switch.  The backhaul is now part of the optical path for the whole cable and a fiber break, as shown in the backhaul network, will lead to a loss of waves passing onto the submarine section of the cable.

Glassing through at the landing station is an essential design option for the cable operator as it can avoid the cost of installing an OTN switch, which can be significant as we approach capacity levels in the tens of terabits.  Digitally terminated traffic in landing stations can also be extremely useful, but it probably represents a small fraction of the traffic on some cables, so OTN switches act as a local add/drop function and the bulk of traffic is expressed through the ROADM.

What can be done to maintain power stability in submarine amplifier chains?

From the dawn of submarine optical transmission, a typical submarine fiber pair has been filled with traffic over time, rather than all at once.  In order to ensure that the submarine amplifier chain can maintain gain stability as the cable is gradually filled up, it is common to install devices that generate optical power over a configurable band of spectrum.  One approach is to use a specially configured erbium-doped fiber amplifier that runs in an ASE (amplifier spontaneous emission) mode.

Figure 3 shows how ASE can be used to stabilize the problem I highlighted in Figure 1. 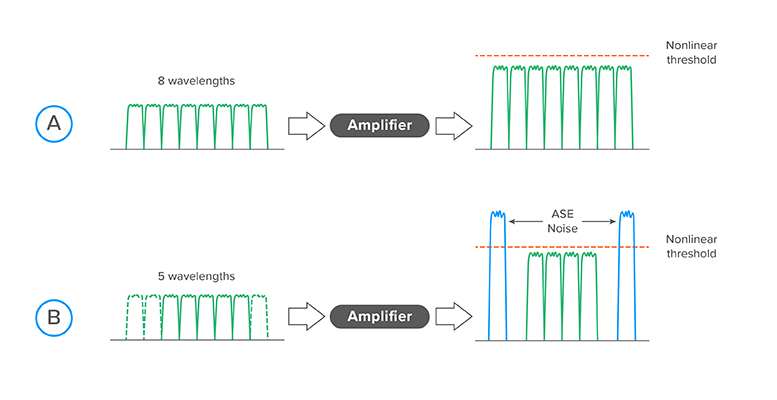 ASE power levels are configured and monitored through Infinera’s Intelligent Power Management controller and flexible grid ROADM.  Using these tools, a cable operator can effectively manage optical power across the entire fiber spectrum, and thereby maintain service stability under a variety of challenging conditions.  In upcoming blogs, I’d like to explain how we can use Intelligent Power Management to help automate service provisioning, enable advanced protection schemes, and make reliable spectrum sharing on the same fiber pair a reality.