Earlier this week, we announced a substantial multi-year project that is now well underway with Globe Telecom in which Infinera’s Auto-Lambda technology is being deployed in DWDM access rings as part of the company’s 5G rollout. With that in mind, we thought now would be a good time to look at this project and other Auto-Lambda projects around the world to reflect on how this technology is changing the way that DWDM access networks are being built.

First, it’s probably worth a few moments to quickly review Auto-Lambda and the drivers behind the technology. Auto-Lambda pluggables are host-agnostic autotuneable DWDM optics. There are two key phrases there, host-agnostic and autotuneable. Autotuneable optics, as the name implies, essentially automatically tune to the DWDM wavelength required for the physical filter port that they are connected to, without any interaction from the host device or an installation engineer. Simply plug them in, and within anywhere from a few seconds to a couple of minutes, the devices have scanned and found the correct wavelength and established an end-to-end connection across the network. Host-agnostic means the devices can be hosted in third-party hardware and that these third-party host devices play no role at all in the tuning process. These host systems can treat the optics as if they were simple grey optics rather than needing to know how to manage fixed-wavelength or tuneable DWDM optics.

As you’d image, the benefits from an operational cost perspective are obvious. They include quicker and simpler DWDM installation processes, fewer errors due to misconfiguration or in planning or documentation, and much simpler sparing and network maintenance. Auto-Lambda can also have a huge impact on the capital cost perspective of DWDM access networks by enabling third-party client systems such as routers, switches, or perhaps 5G RAN hardware to directly host DWDM optics. This eliminates the need for some DWDM hardware such as transponders, which will typically reduce the network hardware budget by at least 30% and save valuable space and power in the access nodes. If you’d like to learn more about Auto-Lambda technology, then just watch the explainer video below.

Not Just for Point-to-Point Networks

The Globe Telecom project is an excellent example of Auto-Lambda technology being used in sophisticated access networks. In fact, we believe this project is the industry’s first wide-scale deployment of autotuneable optics over amplified ring architectures. Autotuneable optics are often positioned as an ideal tool for simpler point-to-point access networks, and of course they are! But it is possible to use Infinera’s Auto-Lambda technology as part of much more complicated networks too. Operators are now deploying Auto-Lambda when they want to add DWDM to existing access rings where grey optics were previously daisy-chained between all the access devices in the ring. These rings essentially shared 10G of backhaul capacity between those devices, so a 10G ring with five access nodes would support an average of 2G backhaul per node. These operators now need to add a DWDM layer into these access networks to enable each access node to support the full 10G capability of the access devices.

Auto-Lambda is an obvious choice in scenarios such as this because its host-agnostic nature enables the new DWDM optics to be installed directly into the grey optics ports in the third-party host devices. This makes them IP-over-DWDM capable without them even being aware of it. The DWDM upgrade can then avoid the additional space and power requirements that any transponder-based DWDM system would require, which is a huge advantage in scenarios like this where additional space and power are often very limited. And of course, it saves CapEx costs in the DWDM network itself as those transponders are no longer needed. 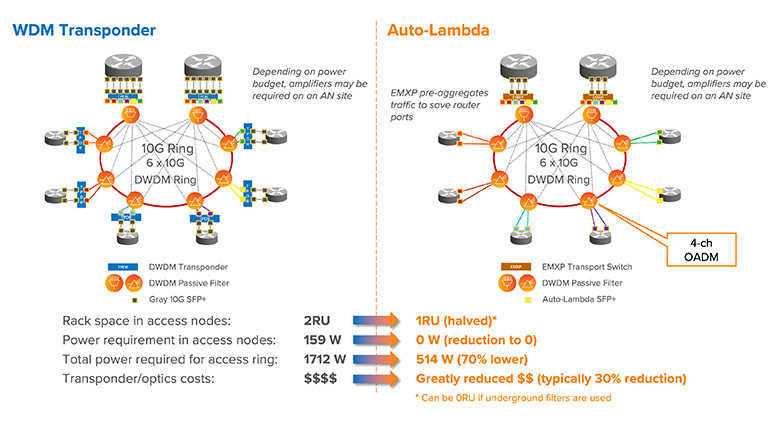 These factors can be addressed, though, by taking an overall systems-level approach rather than just thinking of autotuneability simply as smart pluggable optics. We’ve done this with Auto-Lambda, which is part of our XTM Series platform, so that we can support these sophisticated ring-based access networks and simpler point-to-point access networks with autotuneable optics. Globe Telecom is an excellent example of this because the additional complexity of the ring-based architecture is handled by the XTM Series and the new network maintains the plug-and-play simplicity that autotuneability brings to Globe Telecom’s network engineers.

Beyond the Globe Telecom deployments, it is interesting to see the applications that are driving the deployment of Auto-Lambda elsewhere. 5G is a common driver, since the need for capacity upgrades combined with limited space and power availability in access nodes makes Auto-Lambda a good choice. And we see deployments in both point-to-point and ring-based 5G networks. We also see architecturally similar networks being built to support other last-mile access technologies, such as DSLAM backhaul for residential networks. And it’s not just telecoms operators that are deploying this technology. We also have enterprise customers using Auto-Lambda. An interesting example is an entertainment company that uses Auto-Lambda to simplify operations and reduce space and power requirements in their network that connects their casinos and data centers within a well-known “party city.”

So, what’s next for this technology? As Auto-Lambda is an enabler for pushing DWDM deeper into access networks, taking DWDM into facilities that were never intended to support the technology, we see customers needing temperature-hardened devices beyond the already temperature-hardened pluggable optics and DWDM filters. To address this requirement, we are adding a temperature-hardened optical amplifier to the XTM Series so that we can support all the access node requirements in non-telco environments such as street cabinets.

Auto-Lambda is also an excellent stepping stone to XR optics, which extends the plug-and-play concept to higher capacities and with point-to-multipoint wavelengths. As this exciting new technology comes to market, it will be very interesting to see how customers deploy Auto-Lambda in the non-coherent 10G/25G domain and XR optics in the coherent 25G+ domain, and then evolve from Auto-Lambda to XR optics over time as their capacity requirements grow. 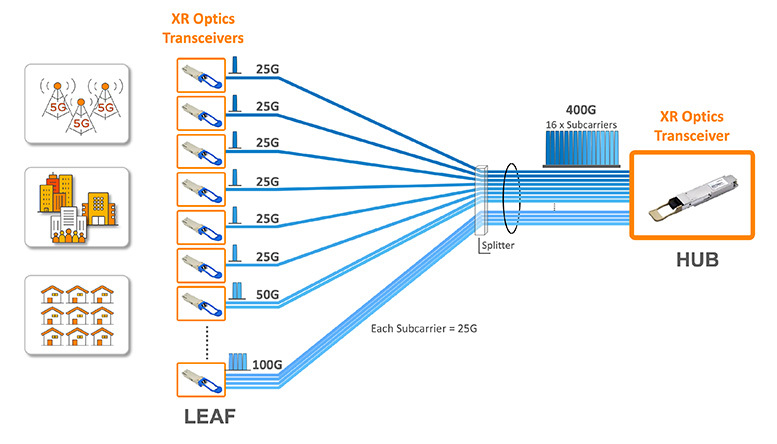