Opening It Up: An Interview with Arelion’s Sumita Sharma, Director, Network Planning and Build

The last several months of 2022 have been both energizing and exhausting as I find myself back on crowded flights, checking into hotels, and meeting face-to-face with our service provider customers. Trade shows are also getting back into full swing, as demonstrated by the industry’s strong showing at SCTE Cable-Tec Expo in Philadelphia, PA and the European Conference on Optical Communication (ECOC) in Basel, Switzerland, both held in September.

As we head toward the Capacity Europe 2022 event in London October 18-20, I was able to catch up with Arelion’s Sumita Sharma, Director of Network Planning and Build. Arelion is one of the world’s leading service providers – one that is critical to interconnecting people and applications around the world. In the interview, we discuss open networking, supply chain challenges, and the future of optical networks.

Tim: Arelion may not be a household name that everyone is familiar with. Can you give us a little background on the company?

Sumita: Arelion might not be a household name but people in the telecommunications industry know Arelion very well as we are the world’s #1-ranked internet backbone provider. We have more than 25 years of experience and serve customers in 125 countries. We have an extensive 70,000 km of fibre backbone network that spans North America, Europe, and Asia.

Arelion, formerly Telia Carrier, is owned by Polhem Infra, a Swedish investment company backed by some of the largest Swedish public pension funds. We started building our network in 1993, when our Autonomous System, AS1299, was allocated, and we’ve grown organically ever since. Today, the world’s largest operators, content providers, and enterprises rely on our #1-ranked global internet backbone for their premium data and voice services.

Tim: What is your current role there?

Sumita: I joined Arelion four years ago and I am currently responsible for the “Plan & Build” function within the Network Technology & Customer Operations vertical. My department is responsible for planning and building the network across all platforms, right from the physical site/power, optical fibre, then the optical transmission network, and finally the Ethernet and IP network sitting on top of the stack.
I’d like to believe that Arelion’s network is at the core of all services we offer, and my team is responsible for planning/building that core and we take immense pride in it.

Tim: Based upon the public statements of your leadership team, it appears Arelion has been a proponent of open optical networking for some time. Would you agree with that assessment and if so, why?

Sumita: Arelion has an extensively large optical networking footprint. We are constantly evolving our network to make it more flexible and scalable to meet with the fast-evolving needs of our customers. We were one of the first Tier 1 operators to push for openness in our optical network. And now having successfully introduced openness across all our network, we can really see the benefits that openness brings.

We have the ability in the network to pick and choose components and optical engines best suited for the network without being locked in with the line system vendor. It has helped us to grow exponentially during the past few turbulent years where demands were touching the roof by deploying the most advanced technologies, for example, one of them being ICE6 from Infinera.

Now looking back, I think the decision to introduce openness in our optical network that we took a few years back (slightly nervously at the time) has proven to be an excellent decision in all aspects one can think of, be it cost efficiency, future-proofing, scalability, or diversifying our purchasing options.

Tim: Do the past two years of supply chain challenges put even more emphasis on open optical networks?

Sumita: Absolutely yes. With the kind of supply chain issues we have seen in the last two years (and in some cases are still seeing), if we didn’t have openness in the network, our choices on how to grow the network would have been hugely limited. Thankfully that’s not the case in our network as almost all our network supports multi-vendor components to work seamlessly together. So, we can work with our suppliers to choose components that have better lead times and avoid the ones suffering from shortages. We are constantly reviewing the shortages closely and making our growth decisions accordingly. Of course, there are things like pre-ordering/stocking that do help as well but having the ability to choose components gives us added leverage.

Tim: You recently deployed Infinera’s ICE6 over third-party line systems in an open optical manner in the U.S. portion of your network. Why now and in this geography?

Sumita: Deploying alien waves (i.e., transponders or optical engines over a third-party open line system) is now business as usual for us. We saw great-performing new technology with Infinera’s ICE6, so we started deploying that where needed. In fact, earlier this year we started deploying ICE6 as alien waves in Europe too. So basically, if Infinera can continue to deliver ICE6 quickly, we will deploy it as we grow.

Tim: What were or are the biggest benefits of doing this?

Sumita: I would say the fact that ICE6 is able to transport huge amounts of capacity (i.e., 800G) with high spectral efficiency is indeed beneficial for our network. This enables us to make the best use of our fibre resources and fulfils the growing demand in the most efficient way. ICE6 also avoids us having to do multiple truck rolls with smaller network augmentations.

Tim: What have been the biggest challenges? Is there still more to do to universalize this approach throughout the Arelion Network?

Sumita: The biggest challenges we initially saw in universalising alien waves over our open optical network were around establishing accountability when things don’t work or break. Do we hold the transponder vendor or the line system vendor accountable for fixing things?

Of course, our suppliers being our long-term partners helped out, but it was important that we understood in a much deeper way how the alien waves worked. This meant that my team had to pick up some additional skills. Prior to the move to open networking, we were totally dependent on the vendor as the complete solution was from a single vendor. But with that no longer being the case with open networking, my team had to do the initial assessment and then make a judgement call on which supplier to contact or sometimes fix issues themselves. With a few years of experience behind us this is no longer an issue, and in the process, we have upskilled the team, which is always an asset.

Tim: Given your experience, has this reinforced your push to open optical or made you more hesitant to proceed further?

Sumita: Looking at where the industry is headed, I am a firm believer that disaggregation and open optical networks will form the foundation for growth by having the ability to easily integrate new innovations as they come. There is no turning back or hesitance on our decision to deploy open networks as we grow. We want to continue to be the leader in providing best-in-the-market services for our customers.

Tim: Do you have any recommendations for others that might be considering open optical networking for their networks?

Sumita: I have been in the industry long enough to know that each network is different and each use case in adapting a technology is going to turn out differently based on the scale of the network, the business model, and the organisation’s appetite to adapt to change.

But one thing I can’t emphasise enough is the importance of helping your teams understand the need for it and helping them adapt to it – because alien waves ARE going to make their work more complex. So, the only way one can make it smoother is by focusing on giving them the right tools, standard processes, and ample training. Once you make it easier for the team, it is smooth sailing from there on.

Tim: It’s been great spending time with you, Sumita, and learning about Arelion’s open optical networking journey and insights. Thank you. I really appreciate it.

Sumita: Thank you, Tim, I look forward to continuing and evolving our long-standing partnership with Infinera. 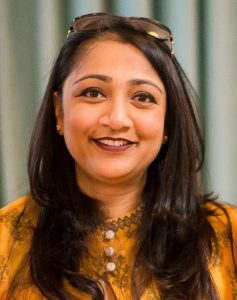 Sumita Sharma, is Director of Planning & Build at Arelion. She is responsible for the team designing, planning and implementing Arelion’s Network, which includes Physical Site Infrastructure, Fiber Assets, Optical Transmission and the IP network. Sumita has over twenty years’ experience of planning, developing and designing advanced telecommunications networks. Previously, she has worked with CenturyLink (now Lumen), Ciena, and ZTE. Sumita has broad technology expertise in areas such as Network planning, Capacity planning, Demand forecasting, Project management, Implementation, Capital management, Inventory management, for Optical terrestrial/Sub-Sea and IP networks. Sumita is based in the UK.

Compact Modular and Carrier Grade: The Match We’ve Been Waiting For