NANOG 85 Tutorial: Optical Fiber Capacity Limits – Where Do We Go Next?

I was delighted when my tutorial submission on Optical Fiber Capacity Limits was accepted by the NANOG 85 Program Committee.  It’s a big topic and I was grateful that they were able to give me a 90-minute slot so that I could explore the topic in breadth, and perhaps give attendees a taste to dig deeper for the options that seem the most appropriate to them.

In this series of three blogs, I’d like to summarize my tutorial as follows:

Hopefully we’re all aware of the amazing capacity that conventional optical fiber delivers.  Fibers that were put in the ground decades ago have delivered incredible capacity increases – from a few megabits per second in the early days of single-mode fiber, to around 80 Tb/s for a modern C+L-band implementation, and up to 100 Tb/s for a future Super C+Super L-band system.  But everything has its limits, and in my tutorial, I tried to explain how we might calculate what those limits are – referring to the Shannon equation, but also pointing out that Claude Shannon’s work predated the advent of optical fiber by decades, which is why you won’t find references to nonlinear limits in his work.  For a more detailed look at capacity and spectral efficiency, why not check out Paul Momtahan’s blog on the subject?

Are All Networks Running Out of Capacity?

A general comment is that the networks that are most likely to experience fiber pair capacity limits are long-haul and submarine networks.  Access and metro networks are typically nowhere near close to exhausting fiber capacity, and they may never do so.  There are exceptions, of course; data center interconnects over short distances may encounter fiber limits, but these links are often so short that they do not need amplifiers, and there are options that include multiband communication, as I will describe in Part 2. 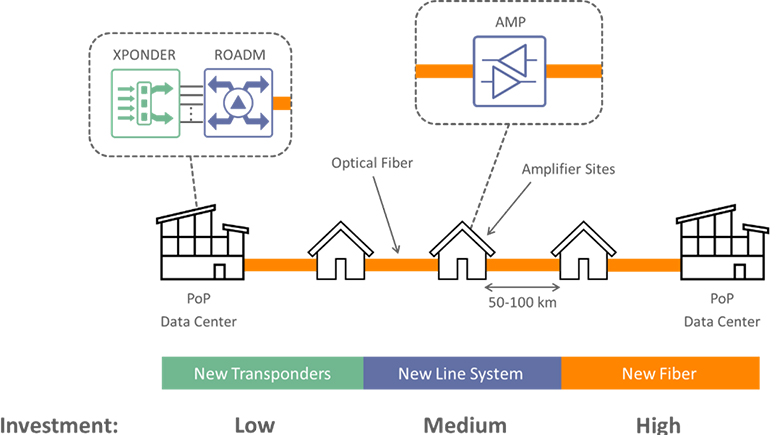 I also used a simple structure of investment impact for capacity increases, shown in Figure 1:

We can potentially consider these three as chronological steps as demand continues to rise and new technologies become available.  So let me summarize the options. 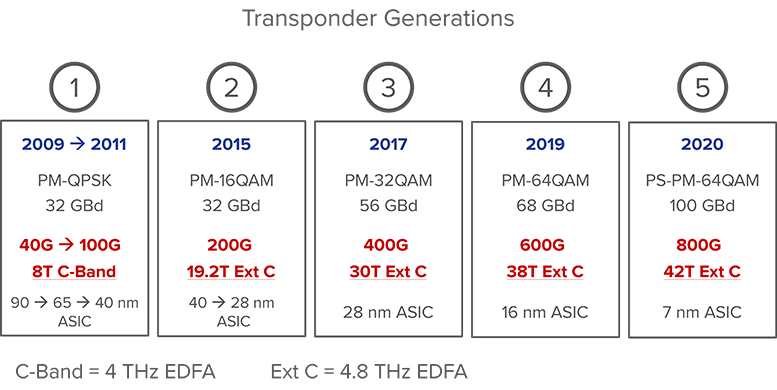 Once a fiber route has been deployed and lit with amplifiers, the only practical option to increase capacity is by following the coherent transponder evolution path.  Figure 2 shows the evolution of the main features in the five generations of coherent transponders.  These were introduced commercially around 2009, and today we’re in the fifth generation, or the 800G generation of these devices, such as Infinera’s ICE6.  Compared to the first direct-detect transponders at 2.5 Gb/s, we’ve seen an increase of around 320x in wavelength data rates (2.5 Gb/s à 800 Gb/s), and over an 800x increase in C-band capacity (20 channels at 2.5 Gb/s compared to 800 Gb/s with flexible grid).

To achieve this, we see the latest transponders using baud rates as high as 100 GBd and advanced modulations such as probabilistic constellation shaping, as well as a range of other features.  In this blog, I discussed how ICE6 is delivering 800G-per-wavelength performance to all optical network market segments, and in this blog Paul Momtahan explains how ICE6 is able to offer the highest optical performance in the market today.

Deploying new transponders to increase capacity is quick and easy for the network operator.  A minimum amount of training is needed in the new technology for operations and maintenance staff, and it’s a commercial process that is well understood by both vendors and network operators.

One of the obvious solutions to capacity exhaustion is to simply light another fiber pair on the route experiencing capacity issues.  This is a perfectly valid option for operators who own their own dark fiber assets.  But on some routes, such as the East Coast of the U.S. and the FLAP (Frankfurt-London-Amsterdam-Paris) routes in Europe, dark fiber is becoming harder to find.

When new routes are planned or deployed, the option to use high-fiber-count cables is extremely attractive.  Most long-haul deployments make use of 1.25” ducts with up to 864 fiber pairs.  More recent fiber technology allows this to be increased to 1,728 fiber pairs per duct.  But some operators may be using 2” ducts as standard, and these can support up to 6,912 fiber pairs per duct.

Lighting more fiber is an attractive option, if available, because it uses existing technologies with no changes to training or operational procedures needed.

But what if you don’t have dark fiber available and you’re already using the latest transponders?

The line system is a major investment for any network operator, and as such, the expectation is that its commercial life will be quite long – perhaps eight to 10 years or even more.  Transponder evolution extends this economic life, but some operators may be looking at new line system options.

The Growth of the C-band

Erbium doped fiber amplifiers (EDFAs) were one of the technological triggers of the early days of DWDM in the mid-1990s, allowing a band of wavelengths to be amplified in a single device.  The band of waves that was most favored at the time was the C-band.  But what is the C-band exactly?  The traditional response is “the band of wavelengths between 1530 and 1565 nm.”  But this is an approximation.  ITU G.694.1 defines the anchor frequency for the C-band at 193.1 THz, but the actual width of the C-band depends on the flat gain profile of the EDFA you are using.  Early EDFAs had about 3.6 THz of bandwidth, but this soon increased to 4 THz – the “classic” C-band that supports 80 channels with 50 GHz spacing in a fixed grid.

Today we find that modern Extended C-band amplifiers have a 4.8 THz bandwidth, and there are developments that push this to 6 THz, which is known as Super C-band.  It’s likely that commercial Super C-band line systems will become available in the next few years.

As transponder performance increases, it’s clear that the available C-band bandwidth must be used in the most efficient way.  Fixed-grid line systems only allow a single DWDM wavelength per grid slot.  If that wavelength does not fill the grid slot, then the rest of the slot capacity is wasted – or stranded.  Moreover, modern transponders operate at very high baud rates.  A 50 GHz fixed-grid system cannot support these rates, and the transponders would have to be configured to run at a lower baud rate, which would not deliver the optimum performance.  To solve these problems, flexible-grid line systems, like FlexILS, have been available since 2013.

While the C-band has expanded over time, there is another band of wavelengths that are at the attenuation minimum for silica-based optical fiber – the L-band.

Just as we casually define the C-band as the wavelengths between 1530 and 1565 nm, we have a similar approximation for the L-band as the wavelengths from 1565 to 1625 nm.  But the practical L-Band is defined by the flat gain profile of the L-band EDFA you are deploying.  And yes, L-band EDFAs have been around for many years and have evolved through “basic” 4 THz L-band to 4.8 THz Extended L-band, and now are evolving toward a 6 THz Super L-band in the same way that C-band EDFAs are.

The first step in this approach, which is already well underway with multiple long-haul operators, is to light up the Extended L-band in addition to the Extended C-band – thus doubling the capacity of existing fiber routes with minimal impact on optical reach or wavelength data rates.  Most of Infinera’s long-haul customers today are already in the process of C+L upgrades for their busiest routes.  These Extended C+L upgrades are often quite urgent and are preferable to waiting for commercially available Super-C systems to appear.  Moreover, the capacity increase with an Extended C+L upgrade is 60% more than a Super-C upgrade.  More capacity, and available now!

In this part of the blog series, I’ve focused on commercially available technologies (apart from Super C-band, which is coming soon), with changes to only the transponders or line systems.  Depending on where you are in your transponder or line system evolution, there could still be considerable capacity increases available.  In the next blog in this series, I’ll look at technology options that are becoming available, or may become available in the future – including new types of optical fiber such as multicore and hollow-core fibers.