Is Your Optical Network Ready for Open and Disaggregated? - www.infinera.com
×
×
About Us / Newsroom / Blog

Infinera recently collaborated with Sterling Perrin, Principal Analyst – Optical Networking & Transport at Heavy Reading; the Telecom Infra Project (TIP); and two other vendors to support the development and execution of a joint primary research project in open and disaggregated packet and optical networks.  While we collaborated on the development of the survey questions, Heavy Reading independently executed the research and synthesized the results.  On January 26, 2021 we joined Sterling, Telefónica, MTN Group (South Africa), and others for a 90-minute webinar, “The Outlook for Open and Disaggregated Packet and Optical Networks,” to discuss the topic and some of the research findings.  If you missed the webinar, you can watch the replay here.

The final research report is now available and provides some very interesting reading. While I encourage you to read the report, if you are short on time or have a short attention span like me, below is a simple explainer video, and my top findings – particularly in the open optical networking area. 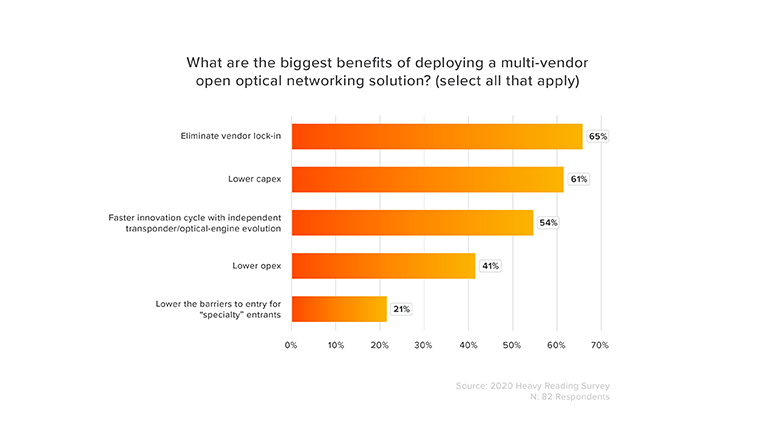 Stop Holding Me Back!

So, if service providers are motivated, what is holding them back?  The top barrier to open optical networking adoption is the operational complexity of dealing with multiple vendors. Right behind it is lack of standards and immaturity of the standards that do exist.  These results are key reasons why you see so much industry effort going into standardizing data models, protocols, and application programming interfaces (APIs).  Participation in organizations like OpenConfig, Open ROADM, and TIP is becoming increasingly common as a place for vendors and service providers to debate approaches and collaborate to overcome these challenges. 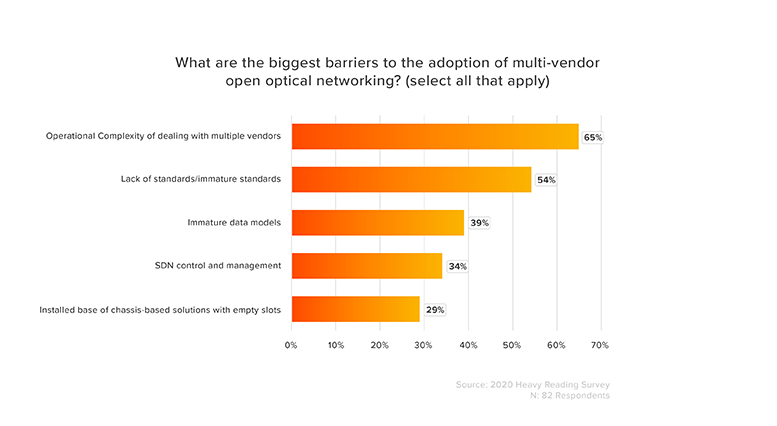 Another capability that may be holding service providers back is underinvestment in software automation and SDN controller deployments.  In fact, SDN control and management was the fourth most cited barrier in Figure #2, but there is a significant difference if you break this down regionally.  As reflected in Figure 3, fully 78% of North American respondents indicate that they will have SDN controllers deployed across their IP/Ethernet and optical networks by the end of 2021.  However, looking outside of North America, only 44% of respondents will have deployed SDN controllers in the same timeframe. In fact, the peak deployment year is not 2021 but looks like 2022 for non-North American networks – which translates into additional risk in terms of meeting this deployment timeline. 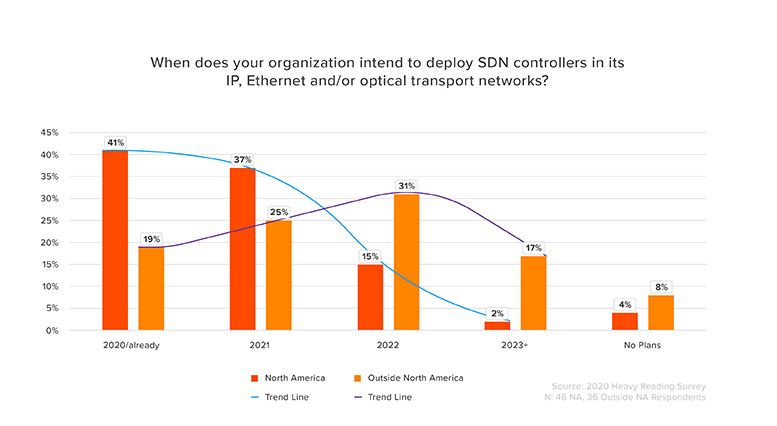 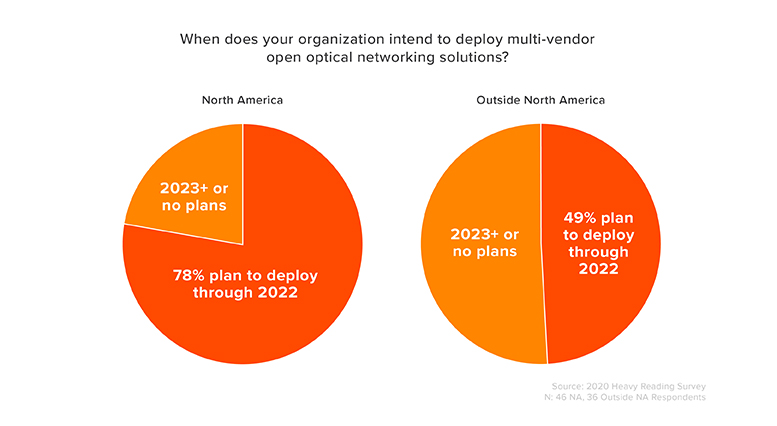 By not getting to an open optical architecture, these service providers will not benefit from reduced vendor lock-in, faster innovation cycles and more choice.  In short, they will either delay or miss the chance to insert next-generation optical engines into their networks.  By not taking advantage of this opportunity, they will miss out on key benefits like improved transmission performance and enhanced network economics with each successive cycle.  The result will be reduced networking competitiveness.

If you would like to discuss open optical networking or other networking topics, please reach out to me at tdoiron@infinera.com.  I am happy to connect and discuss.