What Network Operators Can Learn About Disaggregation from Hollywood, Detroit, and Silicon Valley

Disaggregation is not a new concept. In fact, in economic literature it is often a natural consequence of industry maturity and has been successfully adopted in a wide range of industries. In the early stages of many industries, an integrated product is mandatory, with performance dependent on strong synergies between components of the product/solution, a lack of standard interfaces between components, and a lack of third-party sources for key components. However, as an industry matures, standards emerge, component synergies may become a less important determinant of performance, performance may become a less important metric, and third-party specialists may enter the industry focusing on specific components.

The integrated Hollywood studio system of the 1920s, 1930s, and 1940s gave way to smaller firms, each specializing in the particular tasks required to produce and show a finished piece of filmed entertainment. The automotive industry also evolved from highly vertically integrated companies such as GM and Ford to an ecosystem of manufacturers and specialist suppliers. In the mainframe era of the computer industry, IBM, and later in the minicomputer era, DEC, offered customers a tightly integrated package of proprietary hardware, software, service, and support. This gave way to the PC era, with Microsoft, Intel, a host of PC manufacturers including Compaq and Dell, a large number of application vendors, and a large number of systems integrators.

One recent carrier network example is the disaggregation of optical transport systems into open line systems (OLSs) and open transponders/muxponders.

Another is the virtualization of network functions such as firewalls, broadband network gateways, and the mobile core, disaggregating proprietary integrated systems into software-based virtual network functions (VNFs) running on server hardware powered by commodity general-purpose CPUs. The network edge is also being disaggregated based on data center principles, with initiatives such as the Open Networking Foundation’s (ONF) Central Office Re-Architected as a Data Center (CORD) and ETSI’s Multi-Access Edge Compute (MEC).

As the router industry has matured, merchant silicon and open source software have greatly reduced the barriers to router disaggregation (see our earlier blog, “Where Are You on the Router Disaggregation Spectrum?“). High-performance silicon is now available from a number of merchant vendors and is already widely used by leading router vendors in many of their traditional router product lines. Open Network Linux (ONL) provides a powerful platform for network operating systems, enabling developers to leverage a library of basic open source functions while focusing development resources on more advanced functions and differentiation. Open Network Install Environment (ONIE), providing an open environment for installing a compliant NOS onto third-party white box hardware, is another key enabler. Cost-effective high-speed 100 GbE and 400 GbE pluggables are a fourth enabler, and can be used for external interconnects as an alternative to chassis backplanes.

For more information on this important topic, see the Infinera white paper, “The Case for Disaggregated Routing in 5G and DAA Transport Networks.” 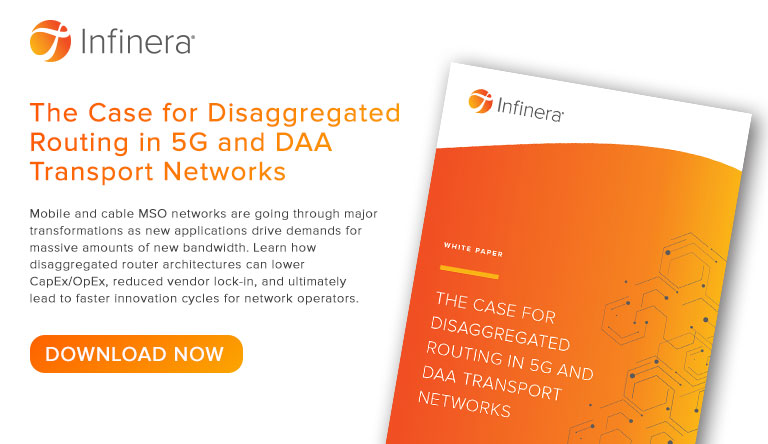