On April 6, 2020, the 25 Gigabit Ethernet Consortium rebranded itself as the Ethernet Technology Consortium and announced that a key focus would be the development of an 800 GbE specification (800GBASE-R). 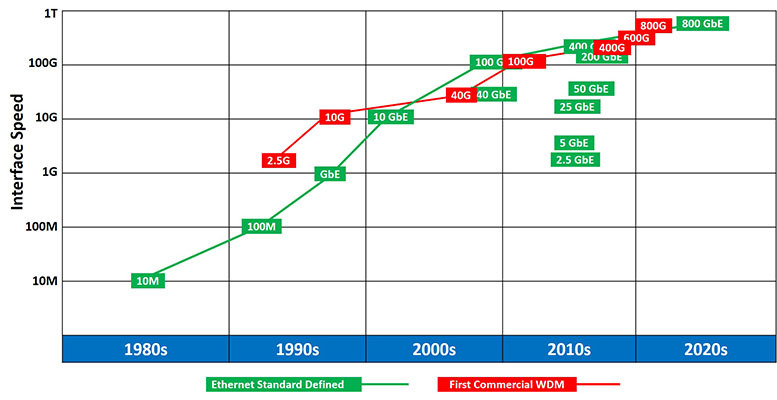 Figure 1 provides an approximate timeline showing when Ethernet standards were or are expected to be completed alongside the first commercial availability of each WDM interface speed.

As you can see, Ethernet and WDM interface speeds are not always tightly synchronized. 10G WDM interfaces appeared in the late 90s, predating 10 GbE, which was completed in the early 2000s. 40G DWDM also predated 40 GbE. However, 400 GbE appeared before 400G coherent, while 800G coherent DWDM is hitting the market well before the standardization of 800 GbE.

Muxponders, switches, and routers aggregate traffic, enabling a high-speed wavelength to efficiently carry more traffic than a single Ethernet client can provide. An 800G wavelength can carry 2 x 400 GbE, 8 x 100 GbE, or 80 x 10 GbE clients, or a combination thereof, as shown in Figure 2.

Dual-wavelength optical engines such as Infinera’s fourth- and sixth-generation Infinite Capacity Engines, ICE4 and ICE6, can virtualize the bandwidth of two wavelengths, carrying, for example, 3 x 100 GbE clients over 2 x 150G wavelengths with ICE4, or 3 x 400 GbE interfaces over 2 x 600G wavelengths with ICE6. This ability is aided by SD-FEC gain sharing, a key innovation that helps both wavelengths operate at the same data rate.

However, while FlexE avoids the hashing inefficiencies of LAG or ECMP, it does not offer any improvements in terms of cost, density, or power consumption. 300 GbE requires three 100 GbE pluggables, so it has three times the cost, footprint, and power consumption. In addition, it has not yet been widely supported by equipment vendors or widely deployed by network operators.

As the form factors for the specific high-speed Ethernet interfaces become compelling in terms of cost, density, power consumption, traffic efficiency, and operational simplicity, and are widely adopted on router platforms, they can become key a driver for high-speed wavelengths.

This happened with 10 GbE and 100 GbE, and is happening today with 400 GbE, with compact, low-power QSFP-DD pluggables, making these a compelling choice for high-density routers while also driving demand as an enterprise and wholesale service.

Cost-effective transport for these high-speed Ethernet clients is best achieved with a single wavelength, as opposed to inverse multiplexing of the client signal over two or more wavelengths (e.g., 400 GbE over 2 x 200G wavelengths). 400 GbE is therefore driving demand for 400G+ wavelengths.

This need for cost-effective 400 GbE transport is also driving demand for 800G generation optical engines like Infinera’s ICE6, which can deliver 400 GbE anywhere (e.g., 6,500+ km terrestrial). If and when 800 GbE is able to offer a compelling value proposition in terms of cost, density, power consumption, traffic efficiency, and operational simplicity relative to 400 GbE, it is likely to become a mainstream interface on routers and other communications equipment, which will in turn drive even greater demand for cost-effective transport. The good news is that the optical technology to make this happen already exists. Infinera’s ICE6 recently demonstrated 950 km for 800G alongside live multi-vendor traffic, over a third-party optical line system and industry-standard G.652 fiber, in a long-haul link of a major North American network operator’s production network.

And while we wait for the 800 GbE standard, the first 800 GbE products, and the evolution of 800 GbE to a compelling and mainstream interface for routers and wholesale/enterprise services, Infinera’s 800G generation optical engine ICE6 can already provide cost-effective, spectrally efficient, and power-efficient transport for client interfaces including 100 GbE,  OTU4, and 400 GbE in the recently announced Groove (GX) CHM6 module.