If you are reading this on the day of publication, the Fourth of May, then as the title of the blog says, Happy Star Wars Day!

I know it’s a terrible play on words to twist the usual “May the fourth be with you” into “May the 400G be with you,” but there is a connection, for those of us in the optical networking industry at least. Today Infinera announced support for 400G coherent pluggable optics in our optical networking portfolio. So there is a small connection, although I would agree that it is a very tenuous one!

Moving quickly on from dodgy date-related Star Wars gags, as mentioned above, we announced in a press release today that Infinera has introduced 400G coherent pluggable optics into both the XTM Series and the GX Series. Specifically, this is via a new Enhanced 400G Flexponder (FXP400G-E) plug-in unit for the XTM Series and a new OpenROADM-compliant, dual-400G sled (CHM1R) for the GX Series.

When using the new 400G optics, both platforms will support up to 25.6 Tb/s over a fiber pair. We are used to hearing about capacity figures like this in advanced long-haul- or DCI-optimized products, but not usually in metro/regional platforms. This equates to an astonishing figure of approximately 8,200 high-definition copies of the original Star Wars film, A New Hope (Episode IV), being downloaded every second.

If you let this calculation run for the full 125-minute runtime of the film, then that would be 61.5 million separate film downloads over just one pair of fibers before the Death Star explodes. Another astonishing figure is the fiber capacity expansion we’ve now achieved with the XTM Series, from 40G in the first release through to 25.6T today. 640x growth! This is a clear testament to the scalability benefits of a disaggregated “switch-on-a-blade” system architecture. 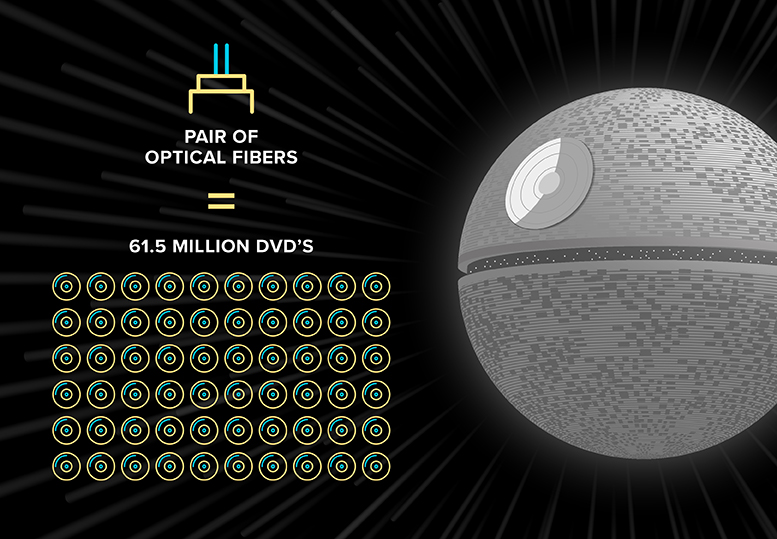 The GX Series also brings the benefit of enabling operators to mix the new 400G CFP2-DCO-based optics with the platform’s 600G and 800G high-performance embedded optics capabilities. This combination enables network operators to optimize transport networks from metro to long-haul and submarine to address the surging bandwidth we see in all networking domains, even before everyone starts downloading Star Wars to see how big the file size actually is.

In addition to 400G ZR+ optics, the platforms will also support the advanced coherent pluggables XR optics once these become available. XR optics provides support for both point-to-point and point-to-multipoint connections and is expected to be a transformative technology for metro aggregation networks.

XR optics’ point-to-multipoint capabilities enable both the XTM Series and GX Series to connect multiple low-speed optical interfaces to a single 400G high-speed interface, reducing the number of transceivers by more than 50%. This also enables more efficient aggregation of network traffic in the optical domain, which can eliminate the need for intermediate electrical aggregation nodes, leading to a significant reduction in CapEx and OpEx.

You might ask, why have we introduced these capabilities into two platforms?

This all comes down to network operators’ building practices. Operators globally use racks that are either 300 mm or 600 mm deep. The XTM Series supports 300-mm environments whereas the GX Series supports 600-mm environments, enabling us to support any networking environment across the two platforms. With 400G line-side interoperability between the two platforms planned, we will also be able to support flexible environments where a 400G wavelength can start its journey in a 300-mm metro access environment and finish in a central office where 600-mm racks might also be available.

So, the era of 400G pluggable optics is here. You’ll be pleased to hear that I’ve avoided the temptation to try to link this to the Star Wars subheading of A New Hope in a final attempt to link this blog to the title. But forgive me for closing with…may the 400G be with you! 😊

A Revolution in Optical Aggregation Networks Is Coming