Tomorrow marks the 131st birthday of Harry Nyquist, one of the early pioneers in communication theory and somebody who predated the work done by Claude Shannon.  If he was alive today, he might be surprised to find that his name lives on in high-performance coherent transmission, specifically Nyquist subcarriers.  So, what’s the link between a researcher in digital telephony and optical transmission techniques that are on the verge of terabit-per-second data rates?

Those of us old enough to remember digital telephone theory will associate his name with the Nyquist rate, a concept that he introduced in a 1924 paper called “Certain Factors Affecting Telegraph Speed.”  At that time his work was involved with digital telegraph transmission, which shows more than a passing resemblance to techniques used for optical communication.  Nyquist determined that the number of independent pulses that can be put through a telegraph channel per unit time is limited to twice the bandwidth of the channel.  This has a direct impact on sampling rates in coherent receivers today, and also on DWDM channel spacing.  Let’s take a look at that latter issue. 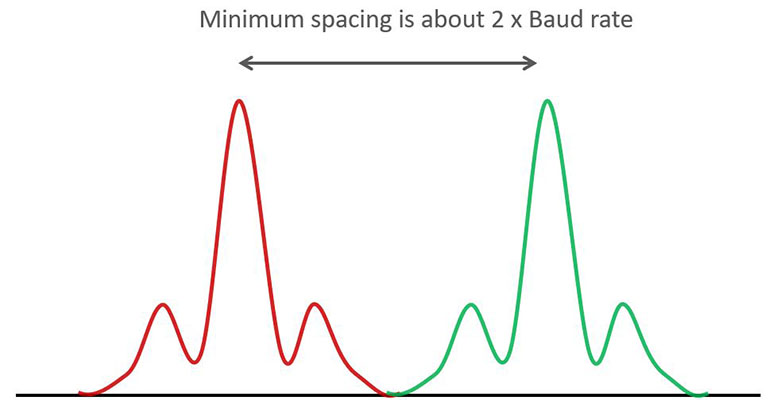 In the first wave of coherent transponders that hit the market from 2010 onward, coherent processing was located only in the receiver, and the transmitted signal looked something like Figure 1.  You can see most of the energy of the signal is in the central peak, but there are side lobes on the left and right that have the effect of widening the signal and preventing neighboring signals from being too close and causing interchannel interference. A rule of thumb was that the minimum channel spacing (in GHz) of these unshaped signals was roughly double the symbol rate (in GBd). So, a 12 GBd signal would need at least 24 GHz spacing between it and the neighboring channel. Note that this is not a hard limit – spacing can be decreased at the cost of optical reach.

By 2016 a second wave of coherent technology introduced coherent processing in the transmitter as well as the receiver.  One of the consequences of that is that the signal can be digitally shaped to produce a signal something like Figure 2.  The DWDM industry dubbed this capability “Nyquist shaping,” focusing on the fact that we can now squeeze channels closer together as a result.

So “Nyquist DWDM” implies that the channel spacing in GHz is now about the same as the baud rate in GBd.  However, you’ll notice that these signals do not have a vertical edge – they have a slope, or “roll-off factor.”  The steeper the slope, the harder it is to perform coherent clock recovery in the receiver, which can lead to cycle slips and other transmission errors.  Practical roll-off factors vary from as low as 6% to as high as 20% depending on the implementation. Note that there can be a small overlap, as shown in Figure 2, but as overlap increases, optical reach will drop.

For this reason, in most optical transmission applications, the idea is to minimize interchannel interference and thus limit channel overlap.  But, for a time, there was some interest in understanding the impact of deliberately overlapping the channels and creating interference.  This was referred to as “super Nyquist” DWDM, and there were ideas about how to deal with this deliberately created interference.  You don’t hear so much about super Nyquist these days, and my guess is that there were no real advantages to the technique, or that the techniques for dealing with the interference didn’t really produce any gain.  However, this may change in the future with the explosion of new coherent processing techniques and more powerful DSPs.

A far more productive technology in terms of delivering high capacity and longer reach is to enhance the shaping technique to create multiple subcarriers.  Since these are a result of a Nyquist DWDM shaping process, they are known as Nyquist subcarriers, although you will also hear them called digital subcarriers or frequency-division multiplexed (FDM) subcarriers by other vendors or in academic papers.  Just be aware that all these terms refer to the same process. 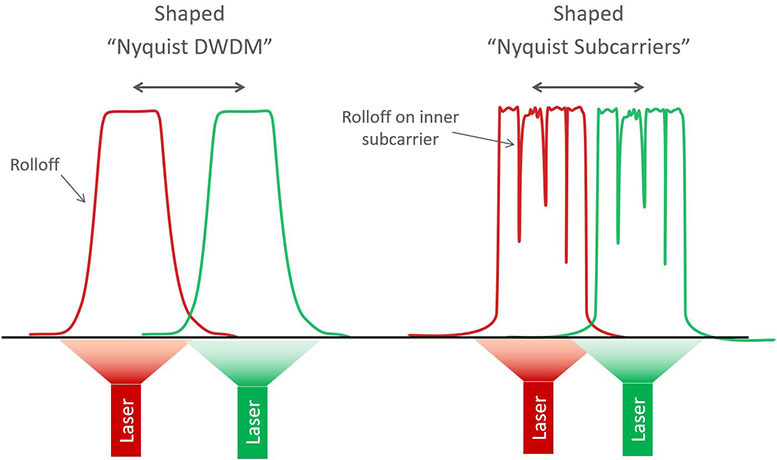 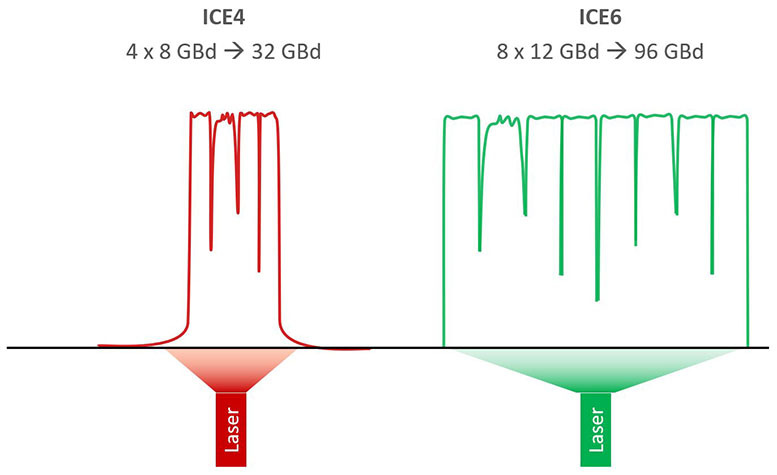 As I explained in a previous blog, one of the reasons subcarriers improve optical performance is that they enable the carrier itself to appear to be operating at a high symbol rate, while the individual subcarriers operate at a fraction of that headline symbol rate.  In Figure 4 I show the fourth-generation Infinite Capacity Engine (ICE4) on the left.  This has a nominal 32 GBd symbol rate but uses four subcarriers per carrier, which means that each subcarrier operates at 8 GBd.  Symbol rates up to around 16 GBaud offer far superior non-linear tolerance compared to high-symbol-rate, single-carrier implementations of 24 to 66 GBd.  Moreover, the lower the symbol rate, the lower the penalties resulting from chromatic dispersion compensation.

On the right of Figure 4 I show how Infinera’s next-generation optical engine, ICE6, addresses the need for ultra-high symbol rates approaching 100 GBd.  By increasing the number of subcarriers from four to eight, the subcarrier symbol rate stays within the non-linear sweet spot at 12 GBd per subcarrier.

In ICE4/ICE6 subcarriers, the idea is that all the subcarriers within a given carrier travel between the same two endpoints – traditional point-to-point transmission.  But most applications – especially in access networks – operate in hub-and-spoke topologies.  Overlaying point-to-point transmission on these topologies leads to stranded capacity and a more challenging upgrade path as hub bandwidth needs to keep pace with overall network growth.

XR optics enables a central location to transmit a carrier with a high data rate, let’s say 400 Gb/s, using (for example) 16 subcarriers at 25 Gb/s each.  But in this case, the optical network between the hub and spokes will broadcast the hub signal to all spoke locations.  Each spoke location operates at some multiple of the 25 Gb/s base data rate and will tune into as many subcarriers as are needed to supply its actual data rate.  By leveraging these capabilities, network operators will be positioned to significantly reduce the number of transceivers in the network, eliminate the need for costly intermediate aggregation devices, and more efficiently optimize transport infrastructure for hub-and-spoke end-user traffic flows. XR optics is designed to be integrated into a variety of industry-standard pluggable form factors, from low-speed interfaces with a single subcarrier to high-speed (400G+) interfaces with numerous subcarriers.

On his 131st birthday, I think Harry Nyquist would be proud of the wide range of innovations that still bear his name – innovations that offer the ultimate in long-haul and submarine performance and that will soon help to transform access network economics.