In nature, size matters. Being subject primarily to forces of cohesion rather than gravity, a fly can easily walk up a wall, something larger creatures such as humans struggle with! Larger size also has its advantages – big animals lose proportionally less body heat and therefore need proportionally less energy/food, and they have better defenses against predators.

When it comes to coherent optical engines, size also matters. In an earlier blog, The Three Vectors of Coherent Evolution, I discussed the three options coherent optical engine architects have to leverage improvements in performance, power consumption, and density enabled by CMOS process node advancements when designing the digital ASIC/DSP, as well as how pluggable and embedded optical engines prioritize these three vectors differently, as shown again in Figure 1. 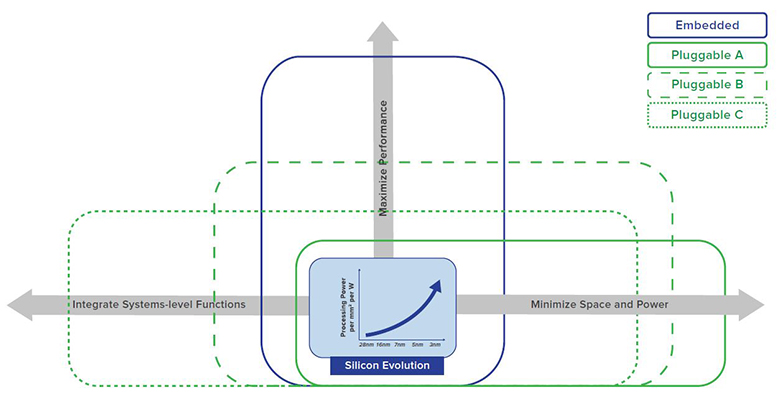 The size of the digital ASIC/DSP matters. For a given CMOS process node, you can either build a bigger chip with more transistors or a smaller, less power-hungry ASIC with fewer transistors. For example, the 7-nm digital ASIC in Infinera’s dual-lambda ICE6 embedded optical engine has more than 5 billion transistors, while the 7-nm digital ASIC in a 400G ZR/ZR+ pluggable will typically have around 1.5 billion transistors, with a die that is around 25% the area of the one in ICE6.  More transistors means more processing power, which enables ICE6 to deliver advanced features, including Nyquist subcarriers, long-codeword probabilistic constellation shaping, and SD-FEC gain sharing, that enable it to maximize wavelength capacity-reach and spectral efficiency. On the other hand, a smaller ASIC enables benefits including reduced footprint, pluggability, and lower power consumption.

However, the digital ASIC/DSP is not the only aspect of coherent transceiver design where size matters. One additional trade-off regarding performance vs. space (and power) relates to the transmit power of the transceiver. Smaller pluggable form factors such as QSFP-DD (18.35 mm x 89.4 mm x 8.5 mm) do not have space for a micro EDFA to boost transmit power. They typically provide transmit power in the -10 to -5 dBm range, which is much lower than the minimum level (~0 dBm) required by many ROADMs. The larger CFP2 form factor (41.5 mm x 107.5 mm x 12.4 mm) can include a micro EDFA to boost the transmit power of the wavelength, with a typical range of -5 to 0 dBm. Embedded optical engines can include more powerful amplifiers, enabling substantially higher transmit power levels for wider compatibility with the long-haul ROADM installed base. For example, Infinera’s ICE6 embedded optical engine can deliver transmit power of up to 9 dBm.

This trade-off between pluggable form factor and transmit power applies more to pluggables that leverage silicon photonics (SiPh) and less to indium phosphide (InP)-based pluggables. Relative to SiPh, InP benefits from an inherently superior opto-electric effect that delivers a higher phase change relative to the voltage and to the length, and therefore loss, of the modulator. And unlike silicon photonics, InP photonic integrated circuits can also include tiny semiconductor optical amplifiers (SOAs) to boost transmit power. As a result, InP-based pluggable transceivers may provide up to 0 dBm transmit power, enabling them to be more easily deployed over ROADM infrastructures, including existing brownfield networks.

Larger form factors such as CFP2s and embedded optical engines can also contain tuneable optical filters (TOFs) that block the out-of-band noise caused by amplification and/or laser side modes, as shown in Figure 2. Without a TOF or other techniques to minimize out-of-band noise, this noise would accumulate from all the different sources in a colorless add scenario with a combiner or coupler, as shown on the left of Figure 3, thus making coherent filterless/colorless add/drop very challenging.

Figure 3: Colorless add without and with TOF

Optical engine form factor and size therefore have implications for ROADM compatibility, implications that will not be solved by CMOS process node advancements alone. QSFP-DD pluggables provide an attractive option for integrating coherent DWDM interfaces directly into routers, providing the potential for both CapEx and OpEx savings without compromising the faceplate density of today’s state-of-the-art routers. However, for many commercial offerings in this form factor, lower transmit power and high out-of-band noise can create some ROADM compatibility challenges. These challenges can be addressed with additional amplification in the optical line system and with a reduced number of interfaces per colorless add/drop structure, but that also has a cost in terms of CapEx, space, and power that may negate some or even all the savings from QSFP-DDs. CFP2-based coherent 400G will have better ROADM compatibility, though CFP2 is a less router-friendly format.  In terms of applications, QSFP-DD can also provide a good fit for non-ROADM applications such as point-to-point data center interconnect. When selecting a coherent 400 Gb/s pluggable for metro core/regional ROADM networks, network operators may therefore have to choose between router-friendly QSFP-DDs and ROADM-friendly CFP2s:

That said, XR optics pluggable transceivers that leverage indium phosphide photonics, such as Infinera’s ICE-XR, can provide CFP2-like performance in a QSFP-DD form factor.  In addition, embedded 800G optical engines, with their more powerful digital ASIC/DSP, TOF, and higher transmit power, provide a good option for DCI and metro core where spectral efficiency/fiber capacity is a high priority, in the case of metro core where the number of ROADM cascades is high, and for long-haul and submarine networks where maximum wavelength capacity-reach and spectral efficiency are typically the highest priorities.

To learn more about this topic, download the Infinera white paper “Pluggables, Embedded Optical Engines, and the Three Vectors of Coherent Evolution”.