Get Ready, 5G Is Coming – but Perhaps Not as Fast as You Think

2019 was a great year for 5G, with network rollouts starting across the globe. Although important 5G showcase events, such as the 2020 Olympic and Paralympic Games in Tokyo, have been postponed due to the COVID-19 pandemic, 2020 still promises to be an even bigger step forward, as 5G network rollout continues to accelerate.

The world is now rapidly moving toward 5G, but true 5G, with new classes of service that weren’t possible with 4G, is still some way off, probably years for most of us. In this blog we’ll discuss the reasons for this staggered or phased approach to 5G services, the huge amount of work being done by network operators to prepare for these new advanced services, and the optical networking vendors that are supporting this migration.

First, let’s clarify what we mean by this phased approach to 5G.

There is a good chance you’ve seen the picture in Figure 1 below that explains the ITU-R’s view of 5G services – it was almost mandatory that any 5G-related presentation contain it for a while! It shows the three main focus areas of 5G services: enhanced mobile broadband (eMBB), which is essentially faster 4G; massive machine-type communications (mMTC) to support the ever growing Internet of Things (IoT); and ultra-reliable low latency communications (URLLC), which creates new service types with support for more demanding network performance in terms of low latency and reliability.

This diagram is sometimes criticized, as some of these focus areas, such as mMTC, are possible with 4G technology, although 5G extends their capabilities. Overall, though, the diagram is still a good representation of how mobile services will change from a single high-speed data service in 4G to a range of services with differing performance characteristics in 5G. 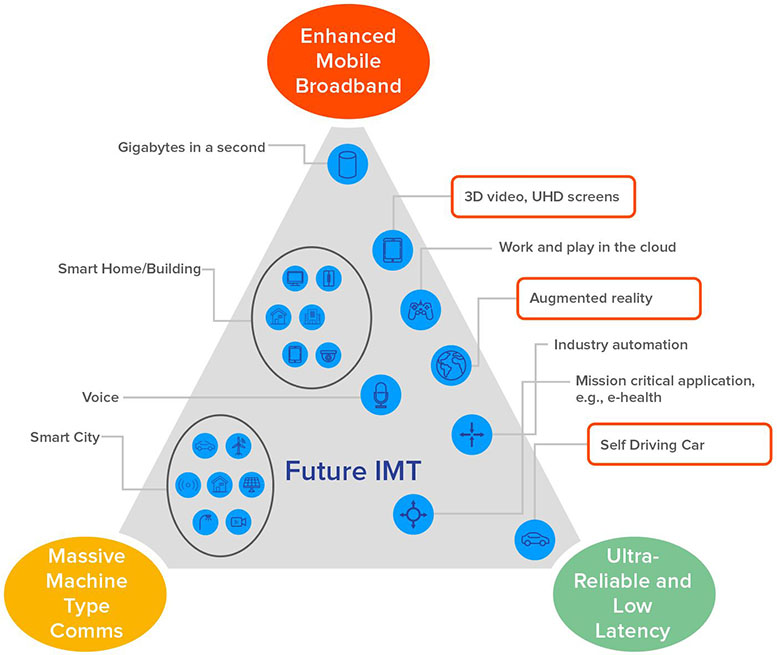 The work to migrate to this range of 5G services is driven by the standardization bodies, and in this case the 3rd Generation Partnership Project (3GPP) in particular. Release 15 of the 3GPP’s series of standards in mid-2019 was the first 5G release, introducing non-standalone new radio capabilities and initial 5G functionality. This has enabled mobile operators to quickly introduce eMBB services, which are essentially faster 4G services.

This is why most of the mainstream media coverage of 5G launches usually involves a reporter using a speed test app to show how fast 5G is compared to 4G, but it’s nothing new from a service perspective other than faster speeds. 3GPP is now working on Release 16, which expands 5G with initial implementations of the full range of 5G services, and it is anticipated that R16 will be completed in June 2020. Going forward, 3GPP has already started to scope out the goals of Release 17, which will enhance these services further.

The initial Phase 1 eMBB 5G services were comparatively quick to roll out as the bulk of the existing 4G network did not require any modification. The radio access network (RAN) in upgraded 5G cell sites needed to be updated, but the rest of the 4G network was not impacted. The backhaul transport network remined the same, as did all the complex processing within the core, hence the non-standalone name.

Some Phase 1 5G services to be showcased at the now-postponed Olympic and Paralympic Games include not only 5G coverage for spectators and the media teams covering the event but also 360-degree 8K video streams and virtual reality experiences for spectators, plus enhanced facial recognition-based security, all utilizing high-bandwidth 5G connectivity.

The move to Phase 2 5G services will see significant changes to the rest of the network, which will take some time to execute. Phase 2 requires a new standalone 5G core network and brings considerable architectural changes to the transport network that interconnects the RAN and the core.

Operators are currently upgrading and extending RAN capabilities to support Phase 1 capabilities over a larger service area and starting to upgrade transport networks in preparation for the additional bandwidth requirements and new architectures required to support Phase 2 services, including:

In summary, a lot of excellent work is being undertaken by network operators across the globe to roll out Phase 1 5G services and to prepare for the more advanced services that Phase 2 will enable. The move to widespread deployment of Phase 2 services will take time, but the end results will be worth the wait!