Game-changing Innovation for a Greener Planet

Reducing power consumption and greenhouse gas (GHG) emissions is central to every discussion at every conference on climate change, and most recently COP27. It is estimated that telecommunication operators consume approximately 3-5% of global energy demand, and as demand for connectivity shows no sign of abating, this electricity consumption is expected to triple by 2030. In addition to the rise in overall electricity consumption, carbon dioxide (CO2) emissions, largely related to power consumption, make up the vast majority of GHG emissions causing climate change. Another factor to keep a close watch on is electronic and electrical waste (e-waste). This consists of electronic devices, circuit boards, and other electronic components that are often retired and thrown away, wasting scarce natural resources such as rare earth metals and becoming a major threat to the environment. If these aren’t correctly recycled, then these junked electronic devices typically pile up in landfill sites and further pollute the environment with their toxic material.

As a matter of fact, according to the United Nations, the world produces as much as 50 million tons – worth approximately $62.5 billion – of e-waste a year, weighing more than all of the commercial airliners ever made. Only 20% of this is correctly recycled. The scale of these extreme numbers clearly depends on myriad factors. However, while waiting for the electric car dealer to call me with an expected delivery date, in this blog post I’ll focus specifically on one area where network inefficiencies drive toward more network devices (e-waste) and higher power consumption and associated CO2 emissions.

Tackling the Issue with Technology

Since the inception of optical networking, there has been a significant misalignment between actual network traffic patterns and the technology used to transport that traffic. Network traffic patterns, particularly in metro and edge networks, are overwhelmingly hub and spoke, with numerous endpoints consuming traffic that is aggregated by a small number of hub locations. In contrast, optical connectivity solutions have been implemented using strictly point-to-point technology, where each end of the connection is required to operate at the same speed (1G, 10G, 25G, 100G, etc.). The result is an extremely inefficient transport architecture that requires large numbers of bookended transceivers, as well as numerous intermediate aggregation devices to “up-speed” traffic flows. The high number of transceivers and aggregation platforms required drives up power consumption and CO2 emissions, as well as the number of telecom devices that will eventually end up in landfills as e-waste.

If we reflect on recent history, technology innovations have positively changed the course of many industries toward a far better environmental outcome – for example, wind farms for power generation and the rapid adoption of electric/hybrid vehicles in some regions. XR optics is the next game-changing innovation for the optical networking industry, with the potential to positively change the course of our industry by reducing its impact on the planet.

XR optics utilizes digital signal processing to subdivide the transmission and reception of a given wavelength spectrum into 16 channels with smaller (25 Gb/s) data rates, called digital subcarriers. These digital subcarriers can be independently managed and assigned to different destinations, enabling the industry’s first scalable direct low-speed to high-speed optical transceiver connectivity over a fiber pair or a single fiber. XR optics’ flexibility in supporting point-to-point (P2P) and point-to-multipoint (P2MP) configurations and its system-level capabilities lead to significant business and operational benefits. In addition to its low power consumption and compact footprint, XR optics enables a greener impact on the environment by significantly reducing the number of devices and platforms that will eventually end up as e-waste in landfills. Specifically, it reduces the number of pluggable optics transceivers by 50%, optimizes router utilization, and eliminates intermediate aggregation sites, minimizing the related environmental impact of each of these elements in terms of power consumption, heat dissipation, associated CO2 emissions, and potentially toxic waste in landfill sites.

Putting It in Perspective with a Modeling Exercise

To help quantify the green impact of XR optics, a technical and economic analysis was performed on a horseshoe aggregation network architecture that compared three coherent-based solutions: 400ZR P2P with electrical regeneration at all intermediate nodes, 400ZR+ P2P with traffic bypassing intermediate nodes, and 100G/400G XR P2MP, which also used optical bypass at intermediate nodes that did not need to access the specific 100G service. Network configuration reflects a typical deployment, with a horseshoe network comprising two hub sites and seven leaf sites with a symmetrical traffic profile, where the same amount of capacity from each leaf node was connected to both hubs, as illustrated in Figure 1. Redundant hardware at each leaf site was assumed for traffic protection. The initial traffic from each leaf to each hub was 100G, and traffic growth of 100G per year for each leaf was assumed. 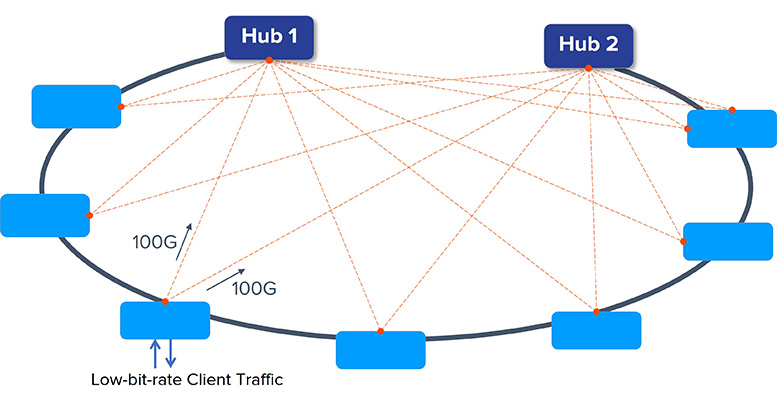 From a line system perspective, this can be implemented in several different ways, including the use of fixed or reconfigurable optical add/drop multiplexers or a filterless line system with passive couplers and combiners. Both these cases operate in a P2P configuration along the horseshoe ring. However, a single 400G ZR pluggable can “regen” multiple 100G streams, and it was assumed that a dual 4T router for 400G and a 1T router for lower speeds, interconnected with grey optics, provided a lower granularity of service. The 100G/400G XR solution operated in a hub-and-spoke traffic profile over the horseshoe ring, with a 400G XR module deployed at each hub site and 100G XR modules at remote leaf nodes. Given the granularity of 25 Gb/s, a single 1T router was assumed at each leaf node. Our transport layer analysis covered three aspects: power consumption in kW, CO2 emissions in tons, and number of telecom devices used in each setup to represent impact on e-waste.

The results of comparing power consumption (kW) for all three solutions are illustrated in Figure 3.

To put things into perspective, Figure 6 highlights the green impact of XR optics when compared to the other two solutions for the first year only. 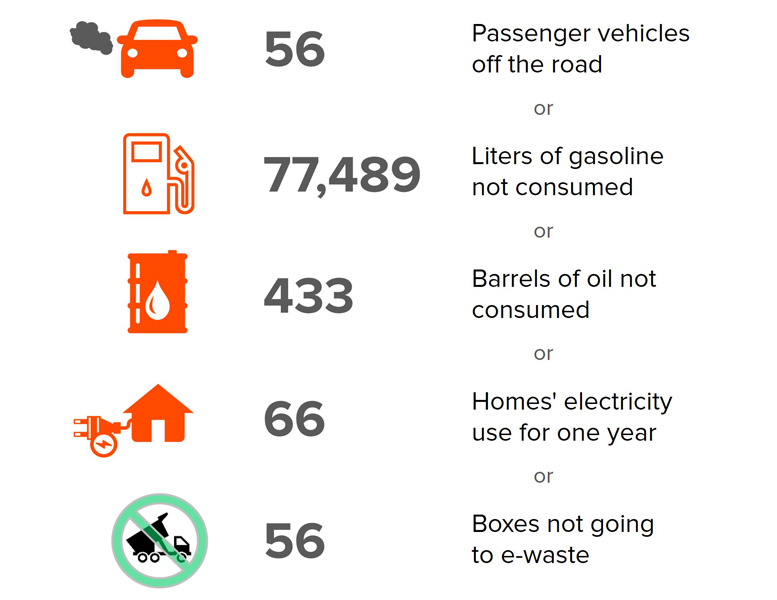 Figure 6: Examples of XR optics’ green impact for one horseshoe in the first year 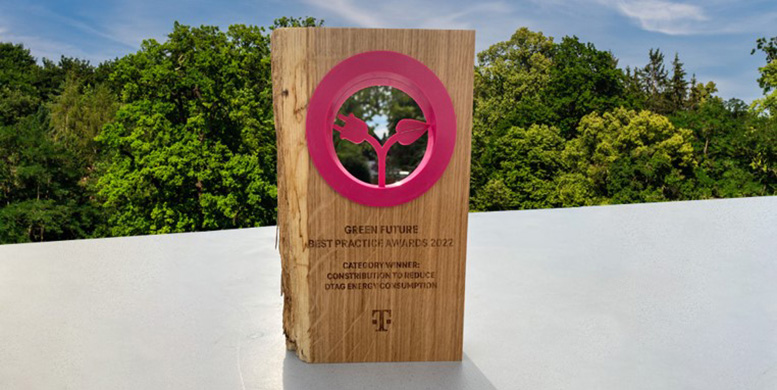 Reducing power consumption, CO2 emissions, and e-waste is paramount to reducing the environmental impact of telecommunications networks on our planet and enabling a greener future. Advances in coherent optical technologies and new network architectures that include point-to-multipoint connectivity can be game changers in making a positive contribution to worldwide initiatives toward a greener and cleaner habitat for today and future generations.