Futurecom 2022: A Celebration of Connectivity

November 7, 2022
By Teresa Monteiro
Director of Solutions, Software and Automation

Recently I attended Futurecom 2022 in São Paulo, Brazil. Futurecom is the biggest technology, telecommunications, and digital transformation trade show in Latin America. This year’s edition marked a powerful return to an in-person event, with attendance exceeding 30,000 visitors over three days, as well as more than 800 speakers and over 250 exhibitors in the exhibition area. Once again, I witnessed how deeply committed the Latin American region, and Brazil in particular, is to pushing the boundaries of innovation, evolving digital infrastructure, and making connectivity accessible to all.

5G was a key topic at the event, with many interesting discussions on how it will foster digital transformation, enable new business models, and boost economic and social development. But that does not mean other technologies, including fiber optic communications, weren’t also top of mind.

Brazil has recently seen a surge in investment in submarine cables, and that topic received a good share of attention at Futurecom. The panel on “Submarine Cables and Optical Fiber For Everyone: Is Disruption Possible?”, in which Infinera participated together with representatives from EllaLink and Seaborn, discussed the evolution of this networking segment and its main challenges and opportunities.

Brazil positions itself as a strategic connectivity hub between Latin America and the rest of the world. There are currently 15 fiber optic submarine cables landing in Brazil, ranging in length from some hundreds of kilometers up to 25,000 km. The first of these cables, named “Brazilian Festoon,” was installed in 1995, connecting several Brazilian coastal cities. Today, the cables span the east coast of South America, some extending north to Central America and the U.S. and others, more recently, connecting Brazil to Africa and Europe. In the last five years alone, nine new cables have been deployed, and one more is already under construction. 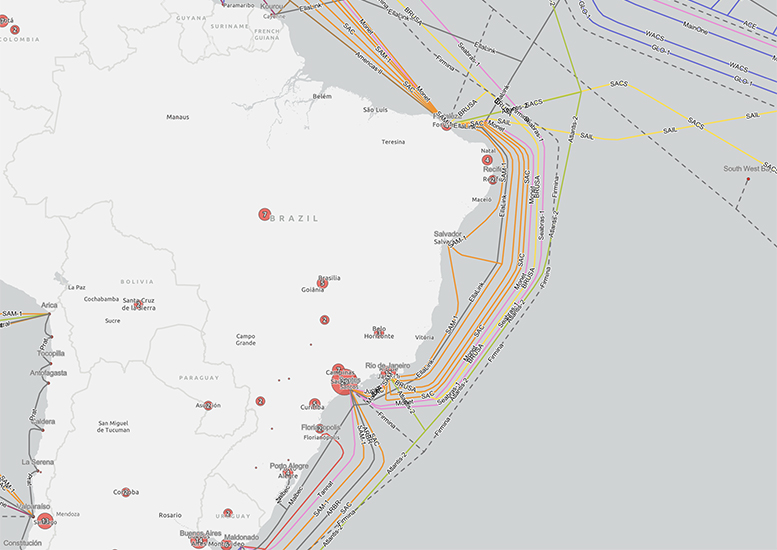 Brazil’s submarine infrastructure serves both content providers and traditional telecom operators, offering wide and reliable intercontinental connectivity with low latency. But as bandwidth demands continue to soar, including those driven by the adoption of 5G, operators need to get the most out of each of these cables. New coherent technologies, including ultra-high baud rates, long-codeword probabilistic constellation shaping (LC-PCS), second-generation Nyquist subcarriers, and SD-FEC gain sharing, maximize the performance of submarine networks, supporting more capacity with lower power consumption, reduced footprint, and lower cost per bit. Infinera’s innovative ICE6-powered solutions have already been selected for deployment over several Brazilian submarine cables, including Seaborn’s Seabras-1 and AMX-1, EllaLink, and, as announced just in time for the Futurecom event, Monet, a 10,500-km cable system that connects Boca Raton, Florida to Fortaleza and Praia Grande, Brazil (Angola Cables and Algar Telecom).

Submarine cable systems were one of the very first optical transport domains to start adopting the  open networking operational model, around 2014. Interestingly enough, open networking was also much talked about at Futurecom.

During the event, there were many references to the open networking paradigm, but I was particularly impressed by the “Open RAN: A Road to Be Built by All” panel. This panel addressed the role of the whole ecosystem behind an Open RAN deployment, including the role of the optical layer. Infinera contributed to the discussion, which revolved around the first outcomes of OpenCare 5G. This industry collaboration has conducted the first 5G private network field trial at the largest hospital in Latin America. Sponsored by Telecom Infra Project, coordinated by Deloitte, and involving Hospital das Clínicas – Faculty of Medicine of the University of São Paulo and Itaú Unibanco, among others, this project is conducting remote ultrasound exams using 5G connectivity with on-premises private Open RAN-based network infrastructure. The medical exams, performed on mothers-to-be in rural and hard-to-reach locations where commercial networks are not available, are analyzed in real time by doctors located in metropolitan areas, improving quality of care, expanding access to public health, and reducing inequalities. This inspiring use case for 5G is expected to attract new investments in health and technology development.

One of the key points debated in this panel was that the main challenge of open networking, regardless of the layer it is applied to, is not the technology itself but the new mode of working that open imposes, with deep collaboration between competitor-partners. This challenge is somewhat slowing the adoption of open networking, with the adoption of Open RAN in particular taking longer than more optimistic commentators anticipated. But the panelists and I believe that stakeholders have been adapting to this new networking paradigm, and that the progress toward disaggregation across network domains has been steady – as the U.S. Navy SEALs say, “Slow is smooth and smooth is fast”.

Another hot topic at Futurecom was sustainability. The telecommunications industry is estimated to consume 2-3% of total global energy spend. As an industry, we need to step up our responsibility, reduce our environmental impact, and move toward carbon neutrality, even as networking demands escalate. We as suppliers are feeling a strong push from operators to design more environmentally friendly products, with less hazardous materials, and enabling more efficient power consumption.

Infinera’s revolutionary XR optics technology, which was presented at a Futurecom keynote session, can be a game-changer for greener and cleaner metro networks, as recognized by the Deutsche Telekom award it received at DT Partner Summit for Green Future 2022, for “Contribution to Reduce DT Energy Consumption.”

A Celebration of Connectivity

Overall, Futurecom was a very successful event for Infinera. We had the chance to meet and have meaningful face-to-face conversations with several dozen customers, including leading operators not only from Brazil, but from several other Latin American countries. But beyond that, there was a certain festive atmosphere at Futurecom that is hard to beat. The Brazilian generosity, hospitality, and relaxed attitude, combined with everyone’s eagerness to be back to in-person events, made for a great professional and social experience. Futurecom 2022 was a true celebration of connectivity!

800G Xponders, 400G Pluggables, Hop-by-Hop Routing: and the Winner Is…

The 7 Vectors of ROADM Evolution