Last month I had the good fortune to attend the ECOC 2022 event in Basel, Switzerland. While several of my colleagues staffed the Infinera booth in the exhibition hall, meeting with operators, ICPs, and partners while performing many live demonstrations of XR optics technology, I spent most of my time on the other side of the road attending the conference, which ran from 18-22 September. This conference, along with other optical conferences such as OFC (see Infinera’s blog on post-OFC 2022 takeaways) and NGON & DCI World, provides an excellent opportunity to take the pulse of the optical industry in terms of its future evolution. While many topics were covered at the conference, here are my top five takeaways in terms of key optical technology trends:

Scaling Capacity in a Post-Shannon World

With state-of-the-art embedded coherent optical engines such as Infinera’s ICE6 taking spectral efficiency to within between 1 and 2 dB of the Shannon limit, there is limited scope for increasing fiber capacity through spectral efficiency alone, with only incremental future gains in spectral efficiency possible. Presentations at ECOC covered several alternative paths to increase capacity, including novel fiber types, more spectrum per fiber with additional bands, and more parallel fibers. Multi-core fibers (MCF) would appear to be gaining traction, including for submarine applications, with the first commercial submarine deployment planned for 2024/2025. The focus was on uncoupled MCF with two to four cores. Transmission of transmit and receive on different cores within the same fiber in order to minimize crosstalk between the cores was discussed in several presentations. MCF-optimized amplifiers and transponders and low-loss MCF splicing were also covered.

Multi-mode fibers were also discussed, including a 55-mode fiber and a ROADM design for 15-mode fibers built from off-the-shelf wavelength-selective switches (WSS) that are available today. Hollow-core fiber was the third novel fiber type discussed, with Lumenisity also announcing a deployment with euNetworks during the event. Other post-Shannon approaches discussed were multi-band transmission, with one presentation describing a multi-band (S+C+L) transmission demonstration of 200+ Tb/s over 2 x 100km, reducing the diameter of fibers and cables, and scaling ROADM networks to support more parallel fiber pairs. 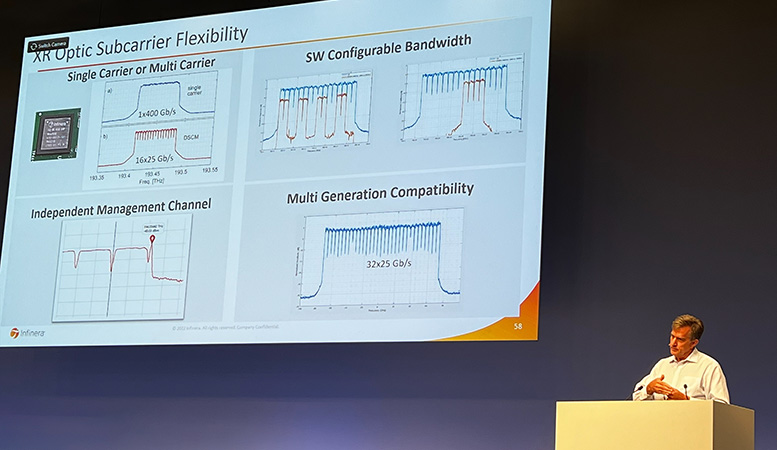 A second topic that I encountered multiple times was subcarriers. Subcarriers and in particular XR optics were a key theme in the plenary session from Infinera’s Founder and Chief Innovation Officer Dave Welch. Paul Wright presented on BT’s recent trials of XR optics (We2A.4). A presentation/paper from the Technical University of Cartagena, E-lighthouse Network Solutions, and Infinera discussed “A Network Dimensioning Algorithm for Exploiting the Capabilities of Subcarrier-Based Point-to-Multipoint Coherent Optics” (Tu1B.2). Other conference papers/presentations related to subcarriers discussed the nonlinear and filter narrowing benefits of subcarriers, the optimal number of subcarriers (four, eight, or 16), and the management and monitoring of subcarrier-based coherent transmission.

Another hot topic was monitoring. This broke down into a number of categories. One category was monitoring the optical network in order to maximize capacity by running with lower margins and changing the transponder data rate as margins decreased or increased, leveraging streaming telemetry, analytics, and machine learning. Monitoring of the environment (lightning, vibrations, wind, waves, seismic activity and tsunamis, rockslides on railway lines, temperatures, etc) rather than the optical network itself was another category. A third category was how to leverage the digital signal processor (DSP) in the coherent transceiver to better monitor the optical network, potentially replacing other forms of optical network monitoring such as optical time-domain reflectometry and optical channel monitoring.

With state-of-the art coherent optical engines such as Infinera’s ICE6 Turbo now exceeding 100 Gbaud, a number of presentations looked at how far the industry might be able to go in terms of baud rate. While the CMOS technology that enables the DSP to deliver high baud rates and more advanced functionality with lower power has an evolution path through 2037 (“0.5 nm” equivalent CMOS), the key challenges are increasingly the photonic materials for the modulators and photodetectors, analog electronics (drivers and transimpedance amplifiers), digital-to-analog-converter and analog-to-digital converter, radio frequency interconnects, and packaging. Novel photonic materials discussed included organic plasmonic modulators, barium titanite modulators, and graphene photodetectors. Lithium niobate, including thin-film lithium niobate (TFLN) and hybrid TFLN silicon photonics, and indium phosphide are also contenders. One presentation concluded that it was not an IF but a WHEN that the first 1,000 Gbaud (1 Terabaud) coherent transceivers would be available.

Neural Networks in the Coherent DSP

Figure 3: Paper on FPGA implementation of a neural network (session We1.2)

Yet another very interesting topic discussed in several presentations related to the use of artificial intelligence (AI) and machine learning (ML) inside the coherent transceiver DSP for applications including nonlinear compensation at the receiver and pre-distortion and compensation of internal penalties at the transmitter. The AI/ML techniques used were primarily based on neural networks, with comparisons of different types of neural networks (deep CNN, BiLSTM, DBP, MLP, BiRNN, ConvBiRNN, LDPP, DCRNN) and non-AI/ML algorithms. One presentation/paper (We1.2) from Aston University in the U.K., Infinera and AMD/Xilinx (see Figure 3) discussed a neural network-based nonlinear equalizer implemented in an FPGA. Another presentation/paper (We1.6) from Telecom Paris and Infinera (see Figure 4) looked at using neural network techniques to improve the performance of coherent transmission in dispersion-managed networks.

Other interesting presentations/papers included one from Infinera on the optimal codeword length for probabilistic constellation shaping (We3C.4), which looked at balancing linear noise tolerance and the nonlinear gain related to the variation in power levels (i.e., kurtosis), one on WSSs inside the data center (e.g. Google’s Mission Apollo), and one that included the use of indium phosphide for WSS and optical multicast switch (MCS) components. Overall, it was a very valuable event and the first event I have attended so far this year that felt truly post-Covid. I am already looking forward to OFC 2023 in San Diego and ECOC 2023 in Glasgow.

The Big Takeaways from OFC 2022

The Good, The Bad, and the Ugly of the Return of Live Events