Recent articles and TV documentaries have highlighted the Internet’s “dirty secret” – it currently accounts for around 10% of the world’s energy consumption, a number that could grow to 20% by 2030, equal to the current energy consumption of the entire United States.

Streaming Netflix for one hour consumes enough electricity to drive a Tesla Model S more than 30 km, power an LED lightbulb constantly for a month, or boil a kettle once a day for nearly three months.

The 5 billion Youtube streams of Despacito in April 2018 burned as much energy as 40,000 U.S. homes use in a year. Bitcoin annual energy consumption is equivalent to Chile’s, with a single transaction consuming the same amount of energy a British household consumes in two months.

5G will only make matters worse, with power consumption forecast to be three and a half times that of 4G. The bottom line is, power consumption and the CO2 emissions that result are a big concern for the industry and the planet. 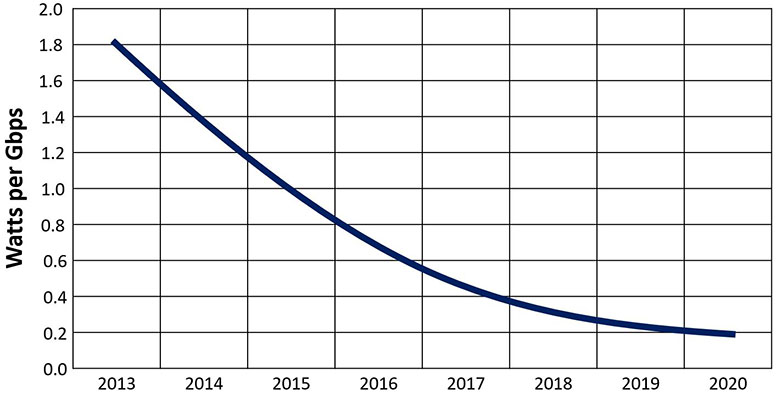 Optical equipment vendors have been trying to do their bit by reducing the power consumption of optical transport equipment, and in particular of coherent transceivers. More efficient DSPs based on the latest CMOS process nodes, photonic integration, advanced packaging, and holistic design have all contributed greatly.

Coherent transponders went from just under 2 watts per Gb/s circa 2013 to less than 0.2 W per Gb/s today, with coherent pluggables based on the 400ZR MSA expected to deliver close to 0.04 W per Gb/s based on 400 Gb/s and 16 W.  However, comparing power consumption metrics between different technologies, products, and vendors can be challenging. Here are five things to consider for an “apples to apples” comparison:

1. Scope: DSP vs. Optical Engine vs. Module vs. System

Other vendors may provide a power consumption figure for the transponder/muxponder module that includes the optical engine and other components. Yet another definition might be for a fully loaded system that includes the transponder/muxponder modules, controllers, fans, and power supplies, with the total system power consumption divided by the total capacity. Even here an apples to apples comparison should consider whether redundant controllers, fans, and power are included or not.

Both need to be considered: the former when comparing likely energy costs and the latter when dimensioning the power supply.

3. Client Pluggables: Included or Not?

Watts per Gb/s can provide an important tool for comparing the power consumption of devices with equivalent reach or that are all capable of meeting the reach requirement. This is normally calculated by taking the typical power consumption for the fully loaded device then dividing by the maximum capacity.

However, this can be somewhat misleading if your actual required bandwidth is well below the maximum of one or more of the devices under evaluation. In this scenario, a better strategy is to determine the required capacity and use this as the basis for a power consumption comparison.

5. Distance: Watts per Gb/s per Km

Plus, the much longer reaches enabled with lower wavelength speeds will deliver even more impressive results for the embedded optical engine.

So to conclude, when we the state power consumption of ICE6 in the newly announced Groove platforms as less than 0.2 W per Gb/s, we are using typical power consumption for the complete Groove platform fully loaded with CHM6 modules running with a line rate of 800G per wavelength. In addition, we would recommend that you use µW/G/km for the actual capacity and reach you require to get the most relevant comparison metric.