Question 1: Do pluggable and embedded coherent optical engines BOTH have a role?

In an attempt to answer this question, I first explained that a coherent optical engine consists of a digital ASIC/DSP, analog electronics, and photonics, as shown in Figure 1. Digital ASIC/DSP evolution is driven by the CMOS process node improvements shown in Figure 2, while photonics are evolving with photonic integration and higher baud rates. This has taken us from 100 Gb/s with hard-decision FEC to 800 Gb/s per wavelength with advanced features including Nyquist subcarriers and probabilistic constellation shaping over the course of a decade.

In terms of coherent evolution, there are three key vectors: maximum performance with advanced optical features, size and power, and the integration of systems-level functions (as explained in an earlier blog and an Infinera white paper). Embedded and pluggable coherent optical engines prioritize these vectors differently, as shown in Figure 3. Embedded optical engines such as Infinera’s ICE6 prioritize the performance and advanced optical features vector. And while early 400 Gb/s coherent pluggables focused on the space and power vector, XR optics pluggables provide an advanced optical feature, digital subcarriers, and many systems-level functions, enabling both point-to-point and point-to-multipoint coherent. XR optics also has the ability to act as virtual transponder, providing demarcation even while plugged directly into a router. So, to answer this first question, there is definitely a role for both pluggable and embedded optical engines in IP-optical networking. 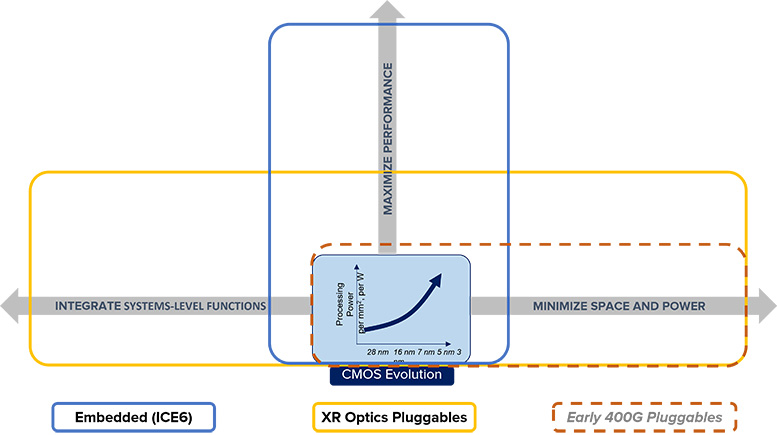 Question 2: Is there still a role for Xponders with coherent pluggables? 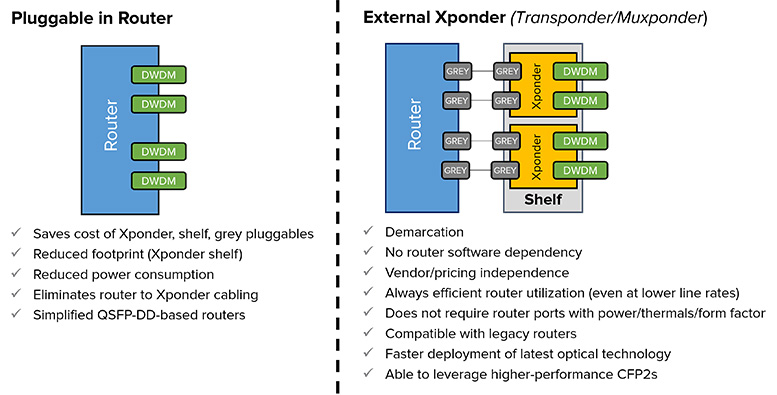 Putting pluggables in routers removes the cost of the Xponder and its shelf plus grey interconnect pluggables. It can also reduce footprint and power consumption while simplifying cabling. On the other hand, Xponders provide demarcation, enable deployment in legacy routers, and enable efficient router utilization with lower coherent line rates (300 Gb/s, 200 Gb/s, 100 Gb/s) or larger but higher-performance CFP2s. They also remove dependency on router software and will enable faster adoption of future coherent technology. So Xponders will continue to have a role, as indicated by a recent OIF survey in which 70% of respondents indicated that they planned to use a dedicated transport box (i.e., Xponder) or a combination of transport box and routers when deploying 400G coherent pluggables.

Question 3: Is there still a role for ROADMs (as router silicon capacities scale)? 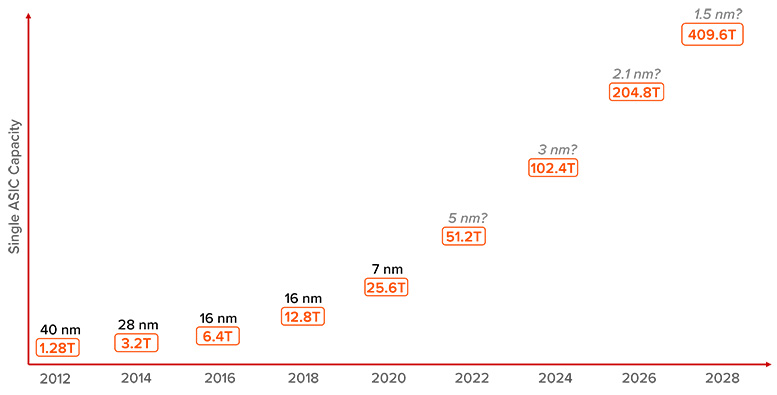 As shown in Figure 5, router silicon is evolving to 25.6 Tb/s and beyond on a single ASIC, driven by the same CMOS process node improvements that are driving digital ASIC/DSP evolution in coherent optical engines. So, the last question I attempted to answer was, will hop-by-hop routing (i.e., switching all traffic, including passthrough, electrically in the router at every site) replace ROADMs? Before answering this question, I first debunked three ROADM myths you sometimes hear. ROADM innovation is NOT slow. As shown in Figure 6, there has been a steady stream of ROADM innovation since their emergence approximately 20 years ago. And this innovation is continuing with things like quad wavelength selective switches (WSS) that enable multiple ROADM degrees on a single blade (i.e., “node-on-a-blade”). Secondly, ROADM costs vary dramatically depending on the type of ROADM. A ~2-4-degree (i.e., with 1×2 or 1×4 WSS) broadcast-and-select ROADM with fixed add/drop does not cost a lot more than fixed DWDM. Finally, ROADM costs are also not static, with the cost of many ROADM components showing similar annual price trajectories to 400G coherent pluggables. And while core ROADM costs also reflect improvements in functionality and performance, innovations are enabling more cost-effective edge ROADMs. 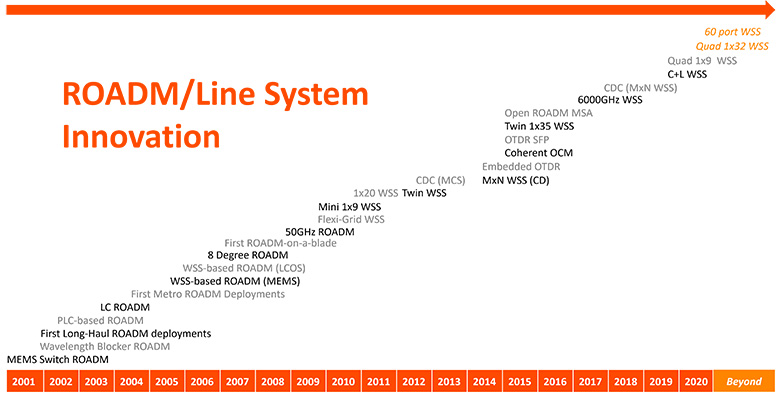 So back to the question: while ROADMs have many benefits, given the time limits of a conference presentation slot, I focused on their top three benefits. Number one is CapEx savings. Even if incremental router capacity were free, which it is not, hop-by-hop routing still requires many more coherent interfaces. In recent network modeling, each ROADM degree typically saved around five coherent interfaces in metro and 10 or more in long-haul. ROADMs are also more scalable, with typically zero incremental cost to pass through another wavelength. And they provide a more future-proof solution, with flexible-grid ROADMs able to support future baud rate evolutions. Finally, with no standards or products for high-speed circuit emulation, they are a must-have for any operator that wants to fully address the lucrative high-speed private line market.

So, to summarize, CMOS, photonic, and ROADM innovations are enabling IP-optical evolution. It’s not pluggables or embedded but pluggables AND embedded, with XR optics pluggables also enabling a transformative point-to-multipoint coherent solution. Xponders still have many benefits even with the availability of coherent pluggables. And, even as router silicon scales, ROADMs still have an important role to play, enabling CapEx savings, scalable and future-proof solutions, and a full suite of private line services.