With no end in sight to the traffic growth from video, cloud, and DCI, and with the full impact of 5G yet to be felt, network operators need to scale capacity cost-effectively while minimizing power consumption and footprint. To address this need, optical vendors are evolving coherent optics technology with ever higher baud rates, first to ~60-70 Gbaud with 600G generation coherent, and now to ~90-100 Gbaud with 800G generation coherent, with even higher baud rates expected to follow.

Baud Rates: The Higher, The Better

But when it comes to baud rates, is higher always better? As a general rule, the answer is yes. The best way to reduce cost per bit, power consumption, and footprint is achieving higher wavelength capacity, or more bits per second, for a given reach requirement, with the same hardware investment in the transceiver’s ASIC/DSP, analog electronics, photonic components, and packaging.

Baud rate, the number of symbols per second, also known as the symbol rate, and modulation, which determines the bits per symbol, provide the two main levers for increasing wavelength capacity. Modulation has advantages in terms of its ability to increase spectral efficiency and its applicability to widely deployed 50 GHz grid networks, as shown in Table 1.

Figure 1: Options for doubling wavelength capacity from 100G to 200G 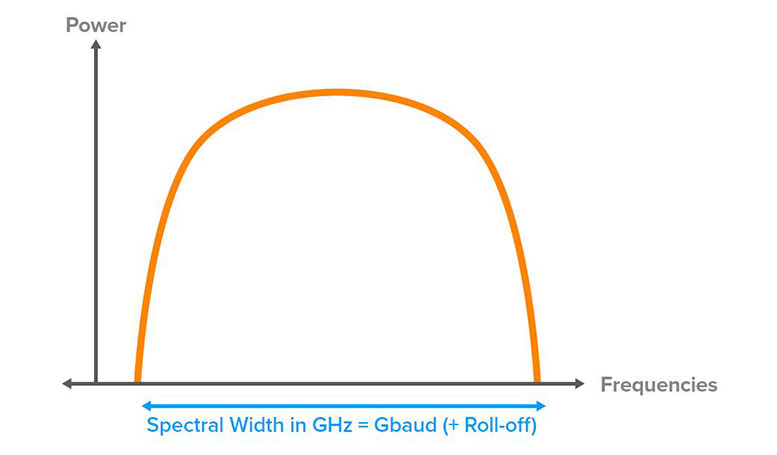 Even Better with Nyquist Subcarriers and Long Codeword PCS

Nyquist subcarriers can further increase the reach of higher-baud-rate wavelengths by reducing their sensitivity to nonlinearities at the receiver and by dramatically reducing the effect of chromatic dispersion, which has a squared relationship with the baud rate.

Probabilistic constellation shaping (PCS) provides another tool to get the most out of the baud rate of the optical engine. Let’s use 800G wavelengths as an example. With 64QAM, an 800G wavelength with a 20% FEC requires approximately 84 Gbaud, so is there any value to baud rates that exceed this figure? The answer to that is yes. As we increase the baud rate beyond 84 Gbaud, PCS enables a reduction in the probability of the outer constellation points, which increases OSNR tolerance (at constant power) and extends reach, with the exact improvement also dependent on factors such as the PCS codeword length. A baud rate of, say, 96 Gbaud with long-codeword PCS  will give us significantly better 800G reach than 84 Gbaud.

While “higher is better” is the general rule for baud rates, there are networking realities and exceptions that require optical engine tuneability.  Today, there are many networks with 50 GHz fixed-grid ROADMs that have not been upgraded with flexible-grid capabilities.

In such networks, filter narrowing will limit the baud rate to around 33 Gbaud. In addition, the filters for fixed-grid point-to-point networks even without ROADMS will constrain the baud rate to approximately 43 Gbaud, 70 Gbaud, and 90 Gbaud for 50 GHz, 75 GHz and 100 GHz, respectively. In addition to fixed-grid networks, there are also cases where lower baud rates may better align with the available spectrum on the fiber.

For example, in a 150 GHz spectrum block, a super-channel with two 68 Gbaud wavelengths will more completely utilize the 150 GHz spectrum and deliver better spectral efficiency than a single 96 Gbaud wavelength, which will leave more spectrum underutilized. And in cases where a reach requirement can be met with higher-order modulation (i.e., 64QAM) dialing down the baud rate to its minimum will deliver the best (i.e., 800G) spectral efficiency.

A lower baud rate may also align better with operationally simplified flexible-grid granularity.  As an example, a 90 Gbaud wavelength can fit into 100 GHz spectrum, while a 96 Gbaud wavelength may require 112.5 GHz.  For some operators, managing spectrum in 100 GHz increments may have operational simplicity advantages. And finally, with trans-Pacific fibers of up to 14,000 km, the additional chromatic dispersion effects of 96 Gbaud may make lower baud rates a better fit.

To summarize, when it comes to high-performance optical engines like Infinera’s ICE6, the higher the baud rate the better, but baud rate tuneability is also required to cover the widest possible set of use cases.