April 14, 2022
By Teresa Monteiro
Director of Solutions, Software and Automation

At OFC 2022, much was discussed about open optical networking and how it offers service providers more choice, faster innovation, and improved economics.

Another hot topic at the event was that of coherent pluggable optics and how they are increasingly deployed in a variety of environments, from routers and switches to 5G radio units and servers.

I would like to bring these two topics under a common lens and share with you my own personal experience from three very busy days meeting service providers and performing software automation demos at Infinera’s OFC booth.

What’s stopping us from being more open?

But most worry how to monitor and control their disaggregated networks in an efficient manner, similar to what they experience when operating a closed system. In fact, the same Heavy Reading survey confirmed that an increase in operational complexity in multi-vendor networks is a top concern for service providers considering the move to open optical. 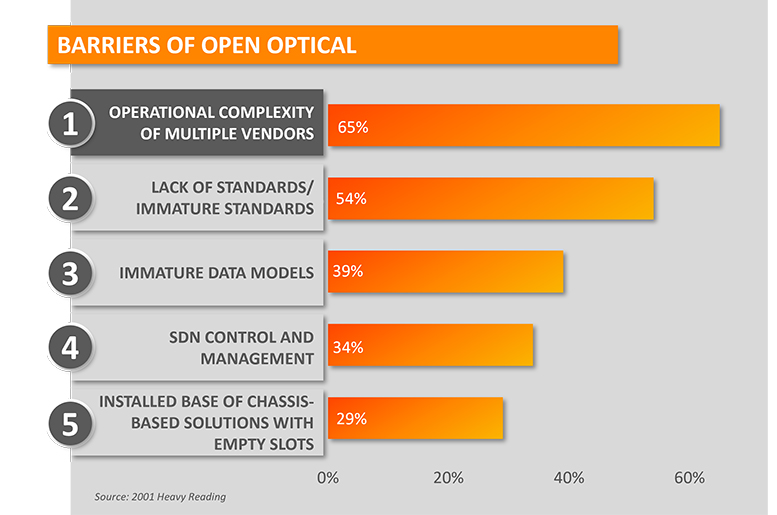 Plus, as optical networks evolve and the deployment of optical engines extends beyond traditional transponders to a wide variety of network platforms such as routers and switches, service providers also wonder how to ensure an effective, complete, and consistent optical operational environment, regardless of where the optical pluggables are hosted.

Software to the rescue?

Software and automation offer the means to break down these barriers and extend the operational simplicity of traditional optical systems to modern, open networks. For that exact purpose, Infinera has launched the Open Optical Toolkit, a new addition to the Transcend portfolio of network automation solutions.

Transcend Open Optical Toolkit is a set of automation applications that ease the deployment and operation of any optical engine over any network infrastructure, including non-traditional transport platforms, and enable service providers to select best-in-class coherent optical technology, in any form factor, from any supplier. I was part of a team demonstrating the toolkit at OFC, and I witnessed firsthand the enthusiastic response it received from service providers.

Open Wave Manager is a use-case-driven software application that offers consolidated management and control of wavelengths and digital services running in a multi-vendor open optical network, offering an operational experience similar to that of closed deployments.

“Why haven’t such simple solutions existed in the market for long?” I was asked.

How does it work?

Additionally, Open Wave Manager offers optical connectivity verification from the optical engines to the line system, as well as end-to-end optical and digital service creation. This includes automated power setting in the optical engines according to their characteristics and those of the fiber and the line system. OWM also performs automated end-to-end fault correlation for simple troubleshooting in case of transmission or equipment failure.

Intelligent Pluggables Manager facilitates the deployment of optical engines that are not hosted in traditional transponders, but in network platforms such as routers, switches, compute platforms, and 5G radio units in the form of coherent optical pluggables.

With advances in DSP and opto-electronics, coherent pluggables are becoming more intelligent and providing advanced functionalities previously supported at the transponder level. However, coherent pluggables on the market today are managed via register-based protocols, such as CMIS, the Common Management Interface Specification. These protocols offer limited visibility on the optical transport layer and sparse management options for the devices when compared to what a transponder is able to present.

Intelligent Pluggables Manager leverages the open framework for management of coherent pluggable optics within third-party host devices defined by the Open XR Forum. This approach allows service providers to maintain the holistic, end-to-end, operational network capabilities they are used to with transponders, even as they deploy coherent pluggable engines in non-traditional optical networking platforms. It also enables support for innovative networking configurations and embedded features offered by intelligent coherent pluggables like ICE-XR, such as point-to-multipoint architecture, streaming telemetry, or virtual transponder functionality, that cannot be effectively supported with CMIS alone.

Open Wave Manager and Intelligent Pluggable Manager can be combined to operate coherent pluggable optics installed in routers, switches, and servers over any line system, leveraging the power of coherent optical technology in any platform, across any optical infrastructure. As members of the Transcend family, OWM and IPM can be deployed as add-ons to Infinera’s existing management and control systems (Transcend NMS, Transcend Controller), complementing their functionality.

In short, Transcend Open Optical Toolkit automates operational tasks in open deployments for better compliance to service-level agreements, higher network availability, improved service velocity, and minimal operational errors, and it enables extended device functionality. This in turn translates into the ability for the service provider to offer new, differentiated services with faster time to market, ultimately becoming more competitive by breaking down open optical barriers. Come and ask us for a demo!