Yesterday I presented a Lightwave webinar on the What, How, and Why of 800G Generation Optical Engine Performance, where I attempted to explain the key factors that drive 800G performance. One surprising factor relates to the relationship between baud rate and wavelength capacity-reach at different data rates.

This reminds me of the expression “every little bit helps,” often shortened to “every little helps,” which is also the long-standing advertising slogan for British supermarket retailer Tesco, and means that “even the smallest things are helpful when towards a goal.” It turns out that with ultra-high data rate (i.e., 800 Gb/s) wavelengths, the same adage applies equally to the baud rate, with a relatively small increase in the baud rate leading to a potentially disproportionate increase in the reach.

At the same time, as the spectrum of the wavelength is proportional to the baud rate, a higher-baud-rate wavelength can leverage higher power for the same power spectral density and therefore the same level of nonlinearities.

Together, lower-order modulation and higher power more than offset the increased sensitivity to noise and nonlinearities of the higher baud rate itself, resulting in significant capacity-reach improvements.

A well-known rule of thumb with higher-order modulation and coherent transmission is the “1 bit = 3 dB rule” – doubling the number of constellation points (QPSK → 8QAM, 8QAM → 16QAM) adds one bit per symbol per polarization and approximately halves reach with a 3 dB increase in the required OSNR.

In fact, the Shannon limit itself follows this rule at higher SNR values, where we can ignore the 1 in its famous equation, C/B = Log2 (1+SNR). Adding 1 bit to the spectral efficiency requires us to double (+3 dB) the required SNR, thus halving the reach.

However, as shown in Figure 1, with higher-order modulations (32QAM, 64QAM, etc.), modem SNR, the amount of noise and distortions inside the optical engine, becomes a key limiting factor that further reduces reach. With low-order modulation, the SNR limit is relatively low and optical noise and nonlinearities are the primary limitation on SNR and therefore reach.

With the higher SNR limit of high-order modulation, modem SNR takes up a larger portion of the available noise limit, allowing for a much smaller amount of external noise (i.e., OSNR and nonlinearities).

Figure 1:  Modulation (bits per symbol per polarization) vs. reach 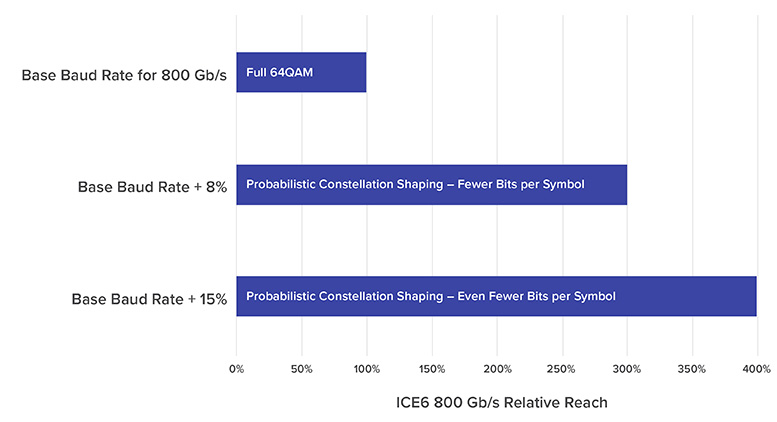 At lower data rates, a marginal increase in the baud rate has a less dramatic but still significant impact on the reach: increasing the baud rate by 15% (from the same base as the 800 Gb/s example) increases the 600 Gb/s reach by up to 40% and the 400 Gb/s reach by up to 20%. One reason these increases are less dramatic is because modem SNR is no longer such a key limitation.