An App for Network Navigation – Welcome to PCE

March 4, 2021
By Teresa Monteiro
Director of Solutions, Software and Automation

In times when customer satisfaction and business agility are critical to network operators, the ability to fulfill service requests fast, keep to service-level agreements, and accelerate revenue by quickly delivering new and more services is key.

But service fulfillment in an optical transport network – that is, the activation of new digital services that may also involve the planning and provisioning of a new wavelength – is not as simple and painless as we would like. Traditionally, this is a slow, costly, and error-prone process, involving a few iterations between:

This approach doesn’t quite meet the needs of today’s network operations and dynamic traffic patterns, where adding or changing services effectively and in real time is increasingly relevant.

When looking for service path computation in a large transport network, we want quick response and we want to be able to define the path-finding criteria and ensure that the resulting path meets all service-level agreement parameters.

Additionally, we want to be able to find and provision optimal end-to-end routes across different equipment types and multiple technologies in a simple and seamless manner, a known limitation of most distributed control planes, where routing information across different network layers is not shared.

Hero to the rescue: the path computation element

A path computation element (PCE, as defined in IETF RFC 4655) is the way to address our needs. A PCE is an application that utilizes abstracted network topology and connectivity to compute a constrained path between two endpoints.

This type of context-optimized path determination offers increased flexibility and effectiveness in service routing, as it considers not only user-defined weights and constraints such as latency, modulation format, link utilization, shared risk link groups, etc., but also live network conditions – pretty much like a Google Maps navigation app for the network.

By complementing the PCE application with a provisioning engine that automates configuration of the resources in the network, the outcome is exactly what we are looking for: simple, fast, and reliable service fulfillment.

But what about multi-domain path computation?

In addition to the benefits above, a centralized PCE implementation offers the potential to consolidate multiple domains and network layers into a global network view, resulting in improved scalability and network-wide efficient resource usage.

Multi-domain path computation can be achieved with a hierarchical path computation element architecture. In this architecture, there is one parent PCE and multiple child PCEs, each responsible for a subdomain, as represented in Figure 1. All paths within a subdomain are computed by a child PCE, which has only information pertaining to its specific domain. The parent PCE maintains only high-level information about each subdomain but is fully knowledgeable of the connectivity between them. The parent PCE is able to perform centralized end-to-end path computation by orchestrating the subdomains, and it associates and coordinates the topology information and routing capabilities of the multiple child PCEs. 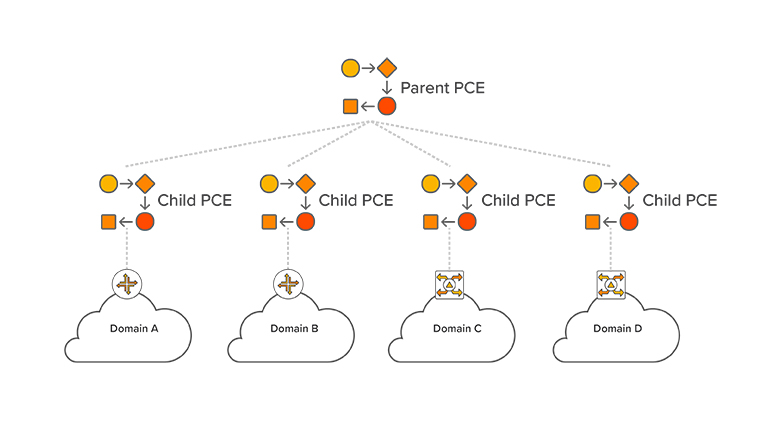 A service that reaches its destination

Some requests for new digital services over an optical transport network will run against fully utilized wavelengths, requiring that new wavelengths be lit in the network. However, the transmission of a new wavelength along a chosen path is subject to optical impairments that need to be assessed ahead of provisioning.

That should not be an issue for a powerful PCE. A PCE should be capable of interfacing with an optical performance application that models transmission in the fiber layer and validates the optical feasibility of a path. In some cases, that optical validation may not even need the superior accuracy provided by a detailed optical transmission simulation – a summary of optical performance may be enough. For simplified operation, the PCE may simply store a set of feasible optical paths between each node pair, including the information on which wavelengths are valid for a given path and modulation format, previously checked by an offline planning tool.

It goes without saying that PCE and service provisioning applications can also be used as a basis for more complex automation tasks and network programming. One example is closed-loop automation processes, where events or patterns observed in the network trigger automated actions in the same network, such as service rerouting upon failure or in anticipation of it, increasing network availability. Choosing applications that provide support for open APIs ensures they can be smoothly integrated into any network operator’s software automation environment.

And all this by simply enabling superior network navigation!

Your Network: As Fast as a Cheetah and as Accurate as a Falcon!

Learn to Love Your Network Again