All You Ever Wanted to Know About Optical Transmission Bands - www.infinera.com
×
×
About Us / Newsroom / Blog

All You Ever Wanted to Know About Optical Transmission Bands 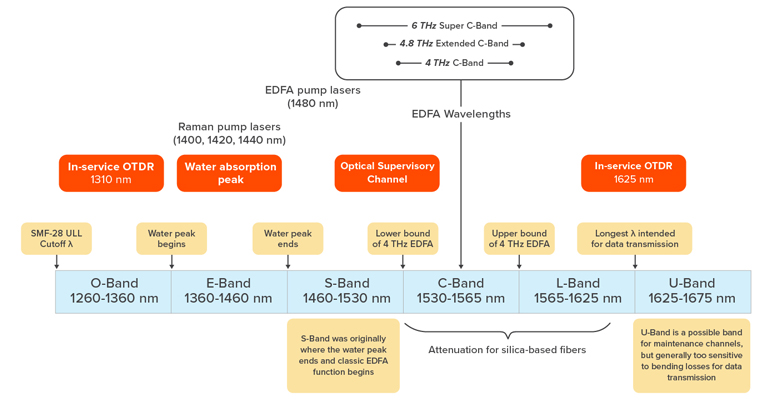 Figure 1: Summary of why wavebands are what they are

For the past 25 years, since DWDM became commercially available, most network operators outside of Japan have been perfectly happy operating in the C-band for optical transmission.  But C+L-band operation is becoming increasingly popular in long-haul terrestrial networks, including with Infinera’s FlexILS open line system.  With multiple presentations at OFC raising the idea that fifth-generation transponders are approaching the Shannon limit, there are increased discussions about the potential to utilize additional wavebands in optical fiber.

But have you ever wondered why there are “bands” of wavelengths at all?  What makes one set of wavelengths distinct from another – to the point where we feel we need to apply a name to that band of wavelengths?  As you’ll see below, for C-band the explanation is pretty clear, but what about the O-, E-, S-, and U-bands?  And why don’t we have bands at shorter wavelengths than 1260 nm, and longer ones than 1675 nm?  Fortunately, the reasons have not quite been lost in the mists of time, and I’ve tried to summarize them in Figure 1.  But here is the longer explanation… 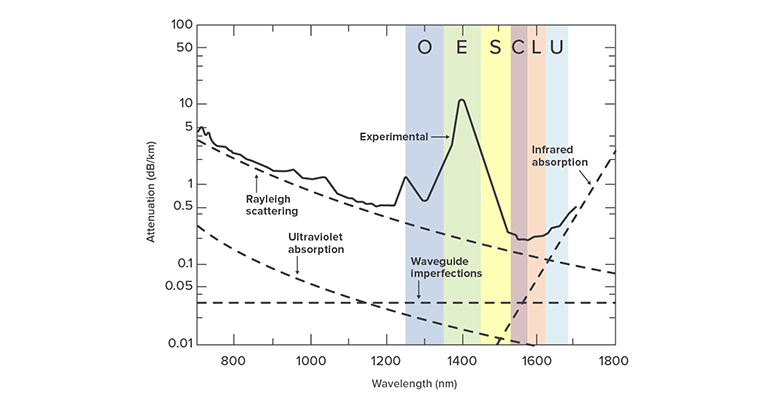 Figure 2 shows a typical attenuation curve for the original silica-based fiber that has been manufactured as far back as the 1980s.  It also shows where the wavebands are located against this curve. Note that these transmission bands do not apply to multimode fibers, only to single-mode ones.

The ITU G-series – Supplement 42 document actually gives a great history of fiber deployment, but you can also check out my webinar on YouTube, “How Optical Networking Transformed Our World”.

The first phase of fiber deployments in the late 1970s used multimode fibers, and the semiconductor lasers of that era could only be built for short-wavelength transmission – around 850 nm.  At that time we transmitted just one wavelength on the fiber, and transmission distances and data rates were limited by high fiber attenuation at 850 nm, as well as modal dispersion caused by multimode fiber.

In the early 1980s, laser manufacturers were working hard to increase the operating wavelengths for their devices by using InGaAsP semiconductors to allow 1300-nm transmission.  At that wavelength the fiber attenuation is much lower than at 850 nm, but even so, transmission rates were limited to about 100 Mb/s by the modal dispersion of those multimode fibers.

Lab experiments in the early 1980s showed that single-mode fiber operation was possible, and by 1988 we had single-mode commercial products able to transmit up to 1.7 Gb/s on a single wavelength at 1300 nm, over single-mode fibers, and with repeater spacing of about 50 km.

This is a key moment because in these single-mode fibers we first see references to wavebands…so let’s take a look.

Single-mode fibers have to be designed with a cutoff wavelength in mind, because below the cutoff wavelength the fiber no longer behaves as a single-mode fiber – it will allow multiple modes to propagate along the core, and this will result in modal dispersion, which will severely limit transmission distances.  Optical fiber manufacturers are able to engineer the cutoff wavelength, but this will inevitably have consequences for other aspects of the fiber’s performance, because they may also be trying to engineer for characteristics such as bend radius sensitivity and chromatic dispersion values and slopes.

To narrow down the scope of the problem for the first type of single-mode fiber (SMF-28, defined by ITU-T G.652), ITU-T set the lower limit for the cutoff wavelength at 1260 nm.  This decision created the lower bound of what became known as the “ordinary band,” or O-band.

But what defines the lower boundary of the next band – the “extended band,” or E-band?

An uncooled laser will tend to drift around the band, depending on its operating temperature.  Before DWDM, there was no need to temperature-stabilize the laser because there were no other wavelengths it could interfere with.  And optical receivers are wideband (within reason) – they don’t care what wavelength they are receiving.*

*Note: Optical receivers can be built with different materials depending on the range of wavelengths they will be used to detect. Silicon can be used from 650 nm to 950 nm, InGaAsP from 950 nm to 1150 nm, Ge from 1100 nm to 1550 nm, and InGaAs from 1300 nm to 1700 nm. Component designers thus have a good selection of semiconductors for optical receivers. But within these bands, a given receiver will detect any light that falls upon it.

But the SMF-28 fiber being manufactured in the 1980s tended to have a water absorption peak at 1383 nm, and this begins to appear in the attenuation curve at about 1360 nm, and its contribution to the attenuation is negligible by about 1460 nm.  So 1360 nm and 1460 nm form the lower and upper boundaries of the E-band.  The fact that they are a nice even 100 nm is a coincidence, but it’s likely that it was rounded up or down to get it to that value.

The next transmission band was dubbed the “short wavelength” or S-band.  And its limits are pretty basic – it starts at the end of the E-band and stops at the start of the C-band!  The S-band itself has historically not had much value in optical data transmission. Why is this?  The reason is that, by the time we could build S-band lasers, we could also build C-band lasers.  This was still in the single-wavelength era, and operating at 1550 nm in the C-band meant lower attenuation than in the S-band.

Intriguingly, G-series Supplement 39, which is a really interesting historical account of why certain things are the way they are in optical transmission, notes that “The boundary (1460 nm) between the E-band and the S-band remains under study.”  I wonder what they’re studying?

The S-band does often contain vitally important “non-data light.”  For example, the optical supervisory channel (OSC) is defined in this band, at 1510 nm plus or minus 10 nm.

If you’d like to hear how S-band could be used to extend fiber capacity in the future, check out Andre Souza’s presentation at the upcoming ECOC show.  That session is organized by Antonio Napoli.

I assume we’re all familiar with the C-band, or “conventional band,” the band of wavelengths that has delivered an astonishing increase in DWDM fiber capacity over the past 25 years.  If you google the C-band, you will be told that it’s “the band of wavelengths between 1530 and 1565 nm.”  But this is really just true for the original C-band in the mid to late 1990s, when EDFAs were introduced commercially in DWDM networks.

When you design an EDFA, you find that the gain profile of the amplifer is not uniform across a range of wavelengths; it usually has a big hump at about 1530 nm and a smaller hump at about 1550 nm.  This would be unacceptable in a real deployment as different data wavelengths would receive different levels of gain, so gain-flattening filters are used to trim off the excess gain.

The practical bandwidth that the first generation of EDFAs could amplify was 4 THz across the 1530 to 1565 nm waveband.  This is what originally defined the C-band, and we can think of this as the “4-THz” C-band – enough capacity for 80 channels with 50 GHz spacing.

After a few years, C-band EDFAs were developed that could provide a flat gain over a 4.8 THz range – 96 channels at 50 GHz spacing.  We generally refer to this as the extended C-band, and it spreads into the S-band at the shorter wavelength end and the L-band at the longer wavelength end.

More recently, EDFAs are being developed to provide much wider usable gain, with up to 6 THz of spectral bandwidth. which equates to 120 channels at 50 GHz spacing.  This has been dubbed the Super C-band.

But references will still base their definition on the good old 4-THz C-Band of the 1990s.

The next waveband is the L-band, or “long wavelength band.”  Together the C- and L-bands are located at the minimum attenuation point for a silica-based optical fiber.  There is no fundamental reason why this is the case – it’s pure serendipity that the most cost-effective, multi-wavelength fiber amplification technology (EDFA) happens to operate effectively at this minimum attenuation point.  However, as Figure 3 shows, to cover both C-band and L-band, we need two different EDFAs installed in the amplifier sites.  L-band EDFAs use somewhat longer lengths of doped fiber, but they use the same pump wavelengths as a C-band EDFA.  If a fiber is carrying both C-band and L-band data wavelengths, these do have to be amplified in parallel because a C-band EDFA would represent a high-loss length of fiber to L-band wavelengths, and vice versa.  So the wavebands are demultiplexed, amplified independently, and remultiplexed at each amplifier site.

C+L transmission is a very active area for terrestrial network operators today, and Infinera’s FlexILS solution is a good example of a C+L line system that has been evolved to offer smooth expansion of fiber capacity.

Is C+L relevant in submarine networks?  The situation is not as clear cut as in terrestrial networks because submarine cables are limited by the ability to provide electrical power to the amplifier chain.  While there is one C+L-capable submarine cable deployed today, the focus of submarine cable capacity expansion has turned to a technique called space-division multiplexing.  You can see a one-hour webinar on this topic here.

Today the final designated transmission band in single-mode fiber is the “ultra-long wavelength” or U-band.  The lower boundary of the U-band is defined by the upper boundary of the L-band, but I have to confess I have no idea why the upper boundary has been set at 1675 nm – the value is just stated as such in ITU documents without a specific reason.  If you know the answer, please send me an email to put me out of my misery!  Because of potential bending losses, this band is not intended for data transmission, but it may be used for maintenance purposes under the current standards.

So that’s it!  I hope you’ve enjoyed my efforts to get to the bottom of the “why are they like that” question.  If any of you have further insights on the topic, please let me know because it’s not always easy to track down good information on these historical topics.  One thing is for sure: that sooner or later we will see increased use of transmission outside of the C- and L-bands.  It will probably be the S-band initially, and the combination of S+C+L could triple fiber capacity compared to C-band only.  To get there we’d need commercial S-band amplifiers based on thulium, rather than erbium, or we could use Raman amplification – only time will tell.