A New Age of Optical Networking - www.infinera.com
×
×
About Us / Newsroom / Blog

I had the pleasure of participating in this year’s Light Reading Optical Networking Digital Symposium event, “A New Age of Optical Networking,” hosted by Light Reading and Sterling Perrin. Alongside Infinera were participants from Deutsche Telekom, Verizon, Comsol, Fujitsu, and Amdocs. We had a very interesting discussion, and there are a few key takeaways I would like to share.

Windstream and Bluebird Networks gave nice insights into their network evolution and the importance of technology innovations such as point-to-multipoint coherent optics (XR optics) and the evolution to 800G optical engines. The presenters also discussed the importance of edge ROADM technology in high-capacity access and aggregation networks. When asked about implementation challenges, one of the top responses was around operational complexity, which is well in line with what we discussed in one of our recent blogs, “Is Your Optical Network Ready for Open and Disaggregated?” This led us into our session, which was about “Tackling Operational Challenges in Open Optical Networking.”

Here is my summary and my personal key takeaways.

While the industry has been talking about open and disaggregated optical networking for many years, it is only now that we are finally getting ready for large-scale deployments. This is thanks to industry standardization bodies such as IETF and ONF and initiatives like Telecom Infra Project (TIP), which are continuously driving and consolidating requirements. These organizations are also creating definitions and use cases to accelerate the adoption of open optical networking. We already have 20 years of the journey behind us, from defining DWDM frequency grid in 2002; to the introduction of NETCONF, RESTCONF, YANG, and YANG-based data models and OpenConfig and Open ROADM MSA shortly thereafter, and the inception of the ONF Transport API and Open Disaggregated Transport Network (ODTN) projects, to name a few important evolution steps. For more details or to refresh your mind on this subject, check out our recap of “The Long Road to Open Optical Networks.” 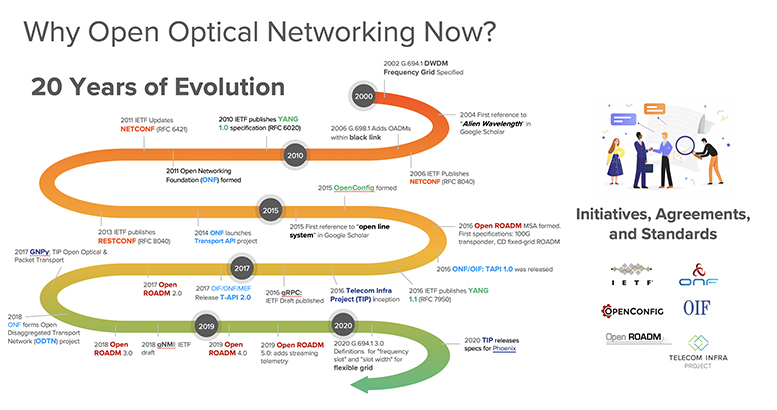 In the service provider keynote of the session, Deutsche Telekom talked about their very interesting and inspiring plans for their open network evolution. It included the importance of TIP and the TIP MUST (Mandatory Use Case Requirements for SDN for Transport) project, where operators are collaborating to define common use cases. This is a very important step toward reducing operational complexity as such common use case definitions can significantly reduce test efforts for mass deployment.

Speaking of testing, “test, test, test” was one of the mantras in this session. All three operators pointed out that testing and validation are currently at the top of their agendas. As the industry standards are still evolving, and disaggregation is considered for large-scale deployments, the solutions must be tested. A great side effect of testing is that it will empower operators to get more confidence and improve their know-how and the skillsets on the path to mass deployment. Amdocs gave a good overview of the current TIP test and integration efforts and initiatives that are helping define test scenarios and tackling operational challenges in disaggregated optical transport networks. 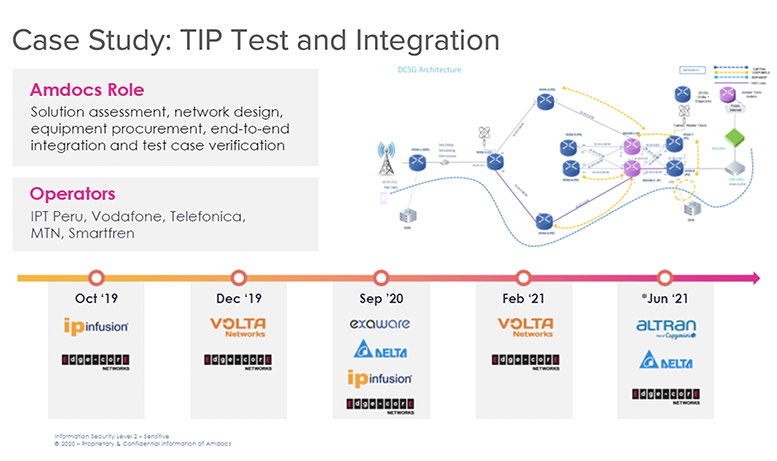 So what’s left to do? While operating open disaggregated optical networks is becoming widespread and the “new normal,” network planning in a multi-vendor optical environment is currently the most interesting area of evolution. Open line systems and open transponder systems from different vendors are now interworking on the same network. To be able to optimize the efficiency of these deployments, link planning and performance calculations are critical. The TIP GNPy project, initiated a few years ago, is tackling these challenges. Vendors will increasingly collaborate in this area to enable operators to maximize the benefits of open, disaggregated optical networking.

The new age of optical networking has arrived. Let me wrap up by reiterating Verizon’s closing words: “Engage early with your vendors and suppliers,” “provide feedback to suppliers and to the industry,” and “use the well-defined open standards and APIs” to simplify network integration and enable a dynamic, programmable network.

A Revolution in Optical Aggregation Networks Is Coming