800G Xponders, 400G Pluggables, Hop-by-Hop Routing: and the Winner Is… 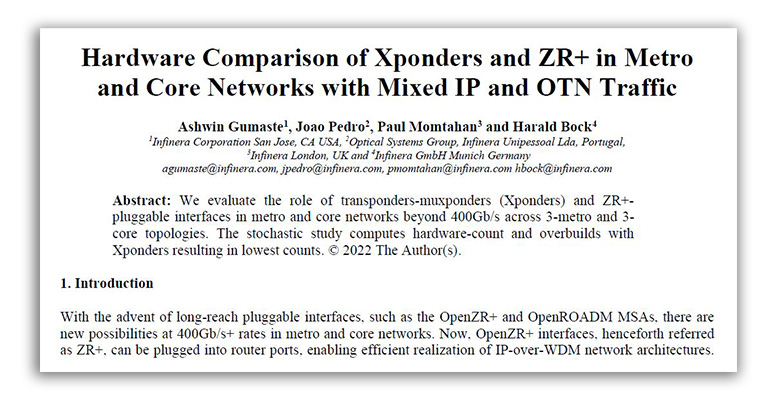 As optical and IP technologies evolve, network designers are faced with an increasing range of potential IP-optical network architectures. Multiple decisions are required to reach an optimal network design. One decision relates to where and when to use 800G generation embedded optical engines, such as Infinera’s ICE6, and where and when to use 400G coherent pluggables, including 400ZR and ZR+. Another decision relates to using Xponders (transponders, muxponders, etc.) or putting coherent pluggables directly in the router, which is often referred to as IPoDWDM. Even with 400G coherent pluggables, there are trade-offs between the smaller QSFP-DD form factor and the larger CFP2 form factor. A further decision relates to the use of ROADMs for optical express or alternatively, a hop-by-hop (HBH) architecture that passes all traffic through routers at each site, thus dispensing with the need for ROADMs.

To shed some light on the optimal IP-optical network architectures for metro and long-haul networks, including the trade-offs between different architectures, a team led by Ashwin Gumaste in the Infinera CTO group performed network simulations for the three architectures listed in Table 1: hop-by-hop, ZR+ ROADM, and Xponder. This was done for six networks, three metro (MN1 with 12 nodes, MN2 with 14 nodes, and MN3 with 16 nodes) and three core/long-haul (CN1 with 34 nodes, CN2 with 80 nodes, and CN3 with 100 nodes), for a total of 18 simulation models. A probabilistic traffic model over a five-year period was used, with traffic doubling every two years. And while some OTN private line traffic (OTU2 and OTU4) was included in the mix, traffic volumes were dominated by IP/Ethernet, and in particular 400 GbE.  The results were published in a paper, “Hardware Comparison of Xponders and ZR+ in Metro and Core Networks with Mixed IP and OTN Traffic,” at the OFC 2022 conference, which ran from March 6-10. Ashwin also presented the results of the paper live at the conference on Thursday, March 10. So, what were the key results in this paper?

Number of Coherent Interfaces Including Regenerations

One of the key goals of the simulation model was to minimize the number of required optical-electrical-optical (OEO) regenerations, as these have a direct impact on network cost. Here, 800G wavelength-capable Xponders unsurprisingly had a significant advantage.  Over a five-year period, the Xponder scenario needed 78% fewer interfaces than HBH and 54% fewer than ZR+ ROADM, as shown in Figure 2. These fewer interfaces resulted from higher-speed wavelengths (i.e., 800 Gb/s and 600 Gb/s vs. 400 Gb/s), a minimized number of regenerations due to improved capacity-reach, and, to a lesser extent, the ability to mix IP/Ethernet and OTN private line traffic on the same interface. 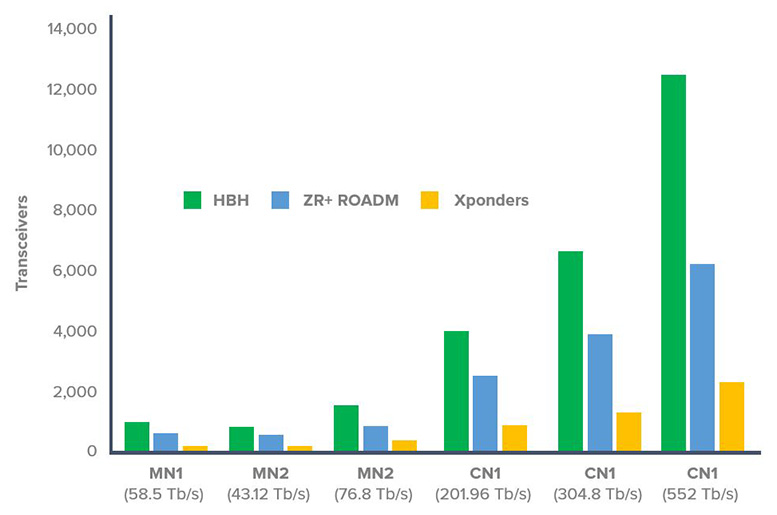 The number of regenerations also has a direct impact on footprint. For long-haul networks, additional modeling by Infinera has shown that that the footprint benefits of eliminating intermediate regeneration can outweigh the footprint benefits of putting coherent pluggables into routers and eliminating Xponders at endpoints. In one large U.S. long-haul network with 75 nodes and 99 links, HBH occupied 44% more footprint than Xponders, while ZR+ ROADM occupied 12% more. Power consumption in this network model was also lower for Xponders relative to HBH and to a lesser extent ZR+ ROADM. 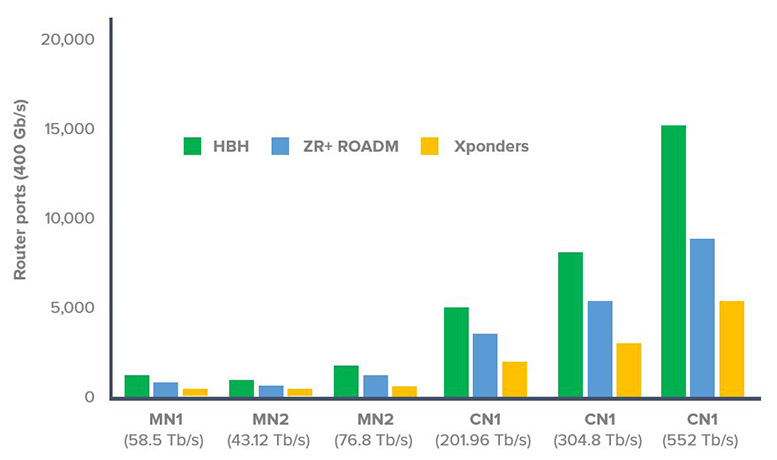 One additional advantage for Xponders demonstrated by the model is a reduced number of wavelengths on each link (i.e., fiber pair between sites), as shown in Figure 4. In addition to higher wavelength data rates (i.e., 800 Gb/s vs. 400 Gb/s) and better spectral efficiency, Xponders could also multiplex IP/Ethernet and OTN private line traffic on the same wavelength, which was not possible with HBH or ZR+ ROADM. 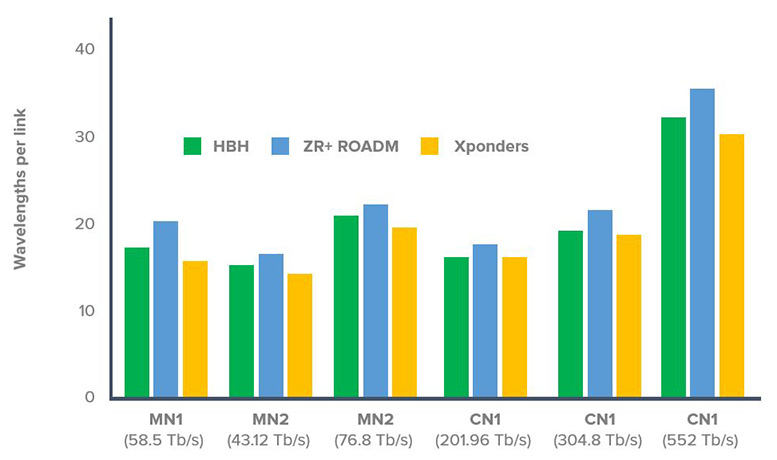 So, to summarize this paper, it demonstrated significant quantifiable benefits for Xponders over HBH and to a lesser extent ZR+ ROADM in terms of the number of DWDM interfaces and router ports. Additional modeling has also shown reduced space and power for Xponders in long-haul networks by minimizing the number of regenerations. Combining these findings with market pricing for the networking components, one can create a comprehensive total cost of ownership analysis.

Based on that comprehensive analysis, ROADMs will continue to have a strong role to play in both metro and long-haul networks. Xponders leveraging high-performance embedded optical engine technology are likely to dominate in long-haul and submarine networks, and will have a role in metro networks with high ROADM cascade requirements and/or where capacity requirements are high but fiber availability is constrained. On the other hand, coherent pluggables are likely become an increasingly popular choice in the metro, as reflected in Infinera’s 8x4x1 strategy.