For the past couple of months at Infinera, we’ve been eagerly awaiting an opportunity to build upon the world-beating 800G transmission performance we demonstrated using our new ICE6 technology over a lab-based 1,000 km line system, as well as our >950 km field trial over a live production network, which used a third-party line system.

The astonishing results we have achieved to date are a testament to the vertically integrated and optimized ICE6 digital coherent optics (DCO), line card, and chassis – no magic or line system manipulation, and nothing that would worry Claude Shannon (although I hope he would be impressed!).

As somebody who was part of the design team for ICE6, and who is now leading the team that runs customer demonstrations of this new digital coherent optical engine, I was relieved and excited when lockdown restrictions eased enough for us to run a second field trial with an even more demanding real-world fiber route.

If you’re just reading this blog to tease out the details of the field trial, I suggest you scroll down to the bullet point summary I included.

About a week and a half ago, I found myself on a sparsely occupied Southwest Airlines flight into Phoenix, AZ after wandering through a deserted airport terminal at SFO.  While it was great to finally be out of the house, I was aware that I needed to be on my guard for the whole trip.

In fact, you can see us here in Windstream’s Arizona PoP wearing masks as we pose for our team photo! That’s me on the right, with Joel Richley on the left; Kim Papakos, the lead networking engineer from Windstream, in the middle; and our partner in crime, Mohammad Reza Chitgarha, inset, as he was working from San Diego. 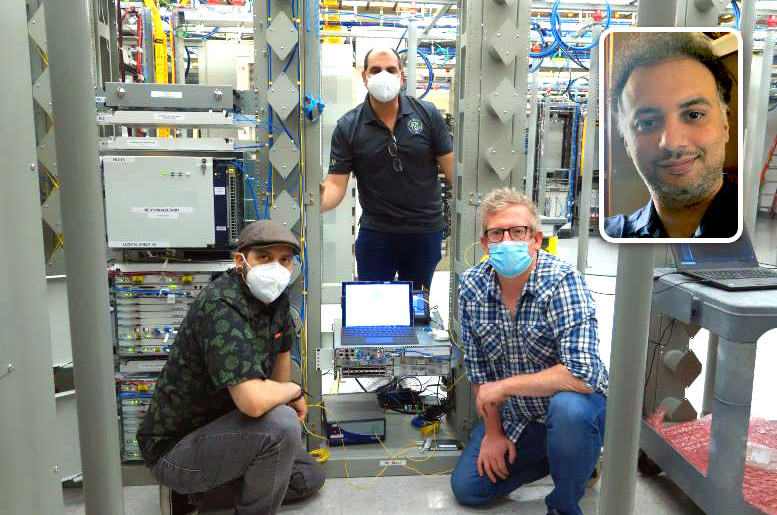 While you can read the full details in our announcement, the Windstream link is 730 km long and consists entirely of standard SMF-28 (G.652) fiber.

The span lengths varied across the link due to the geographical locations of amplifier sites, with span losses as high as 28 dB experienced, making this route a demanding real-world test of our new 800G ICE6 technology.

Some of you reading this will appreciate that high-loss spans are just a fact of life in terrestrial long-haul networks, but the lower optical power entering the optical amplifier after traversing these long spans adds additional noise to the signal, which typically results in reduced transmission reach.

However, I was confident that we would be able to close the link at the full 800 Gb/s data rate, and have sufficient margin to support a deployment of 800 Gb/s of service capacity on a single wavelength. 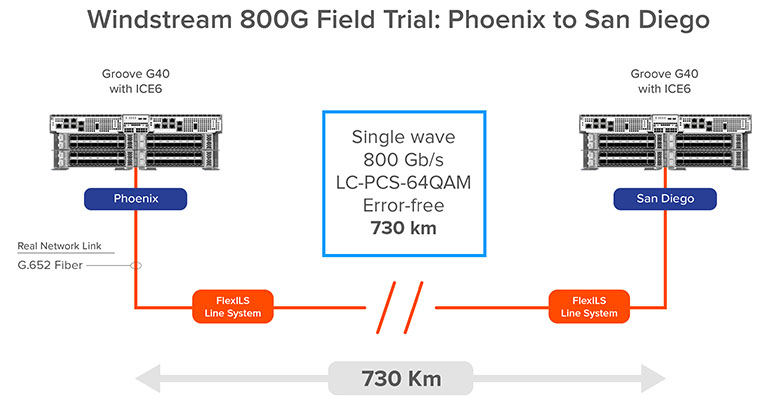 The OSNR margin to the forward error correction (FEC) limit was greater than the threshold for Windstream’s production network deployment standards for revenue-generating services.  For those of you who are not sure what FEC limit means, please allow me to clarify.

Every optical wavelength in service today experiences large numbers – thousands or even millions – of errored bits every second.  We are not concerned about the errors, because almost all those links use FEC to correct the errored bits.

What we care about is if the noise at the receiver exceeds the FEC limit, which is the level of noise the FEC algorithm can handle before it cannot correct errors.  If we were far enough above the FEC limit, then this wavelength could be accepted for real, revenue-generating services.

Since we had access to a real network link, it would have been rude not to try a loopback test. What this means is that we placed a loopback fiber at one end of the network, which sends the dropped signal back into the add port of the same ROADM. The signal is transmitted back to the point of origin, resulting in a transmission distance that is double the geographical path length – in this case 1,460 km.

For this distance, we dialed up a 700 Gb/s mode from the flexible ICE6 line card, and once again delivered best-in-class performance. And, as with the 800 Gb/s demonstration, this single-wavelength 700 Gb/s also came in with sufficient performance margin to meet Windstream’s stringent production network deployment standards.

Perhaps the most rewarding aspect of a trial like this is the potential economic benefits for Windstream of operating a significant proportion of their long-haul links at 800G.  Other vendors who are committed to 800G, or even 600G, products have repeatedly stated that at the full data rate of an 800G or 600G modem, customers should expect to only get reach between 100 and 200 km.

While this shorter reach would allow some data center interconnect links to be closed, it would fall far short of closing most of the links in a long-haul terrestrial network at the full data rate of the transponder.

To achieve long-haul 800G, it is imperative that the DCO module is vertically integrated and optimized to generate optical wavelengths that have best-in-class noise performance and that are the most resilient to line system noise and impairments, such as cascaded filters and nonlinearity. This design decision and subsequent execution vastly enhances the economics of 800G by making it available to a far wider range of markets.

Thank you to the Windstream team for working with us. Our customer roadshow continues, so stay tuned for some more 800G transmission records…

A summary of the real-world aspects of this trial: