5G Slicing and Dicing the Network - www.infinera.com
×
×
About Us / Newsroom / Blog

5G Slicing and Dicing the Network

MEF held the fifth installment of its 2021 Infinite Edge virtual event series during the month of May. The theme was “5G: Slicing & Dicing the Future from End-to-End.” The event included speakers from vendors and service providers alike. Kyle Malady, Executive VP and CTO, Verizon, helped to kick off the event in a panel moderated by Pascal Menezes, CTO, MEF.

One of my favorite comments that Kyle made during the session was that he often described their 5G as a massive fiber network with antennas hanging off it. It is an insightful comment because amid the many discussions about increasing 5G wireless spectrum for more capacity, virtualizing and distributing the radio access network (RAN), and deploying the 5G core for Phase 2 features, it is easy to forget that the actual wireless part of the 5G network is at the end of the connection – between the smartphone or other end-user device and the radio or cell site. The rest of the network, from 5G new radio (NR) to next-gen (NG) core and cloud applications, is almost entirely fed by fiber (and yes, there is still some microwave).

So, where does network slicing fit into this fiber-rich networking picture?

5G is different than prior mobile generations in that the architects envisioned mobile services beyond faster consumer smartphone connectivity. 5G architects envisioned a network where enterprise services and machine-to-machine communications, including use cases like wireless factory automation, could thrive side by side with faster consumer smartphones for streaming video. To be cost-effective, the 5G architects designed in the ability to partition or slice the shared resources of the 5G infrastructure and associate the assignments with multiple tenants and various types of services, including low-latency/mission-critical services.

A 5G Transport Toolbox Is Your Friend

With 5G RAN and NG core virtualization, we have the potential for a more distributed mobile network, which requires flexible transport for fronthaul, midhaul, and backhaul. Because of this distributed nature, 5G transport needs a flexible Layer 0 through Layer 3 toolbox that includes capabilities like intelligent autotuneable and reconfigurable DWDM optics, Ethernet-based switching with Time-Sensitive Networking capabilities, disaggregated routing, and intelligent software automation to glue it all together.

At the packet layer, mobile operators have used VPN technology in mobile transport networks for years, including in 3G and 4G networks for traffic separation, isolation, and control. In discussions with service providers and in industry surveys and research reports, VPNs remain one of the top technologies to implement 5G network slicing in the packet domain. Each slice is mapped to a specific VPN with traffic-engineered characteristics consistent with the slice’s required performance criteria like latency.

So, where does optical transmission fit into 5G slicing?

Underpinning VPN and packet switching technology is optical transmission technology, including coherent DWDM. So optical networking plays a role in 5G mobile transport and can also participate in network slicing. As one example, assigning separate optical wavelengths (referred to as wavelength slicing) to individual network slices is something we see show up in surveys and service provider conversations.

In addition, with RAN functions containerized to run on general compute resources, and with the introduction of multi-access edge computing for low-latency services, the mobile network and its logical functions are far more portable and potentially distributed than in prior 3G or 4G networks. Thus, having a more flexible and programmable coherent DWDM optical transport layer to match the packet layer can be equally beneficial.

That’s where XR optics’ point-to-multipoint transmission capabilities come in. The underlying Nyquist digital subcarrier technology in XR optics can be individually assigned to a network slice just like wavelength slicing. In addition, this same assignability can be used to flexibility reallocate optical capacity (for example, in 25 Gb/s increments) when and where needed to better align with distributed and dynamic RAN and MEC deployment locations. 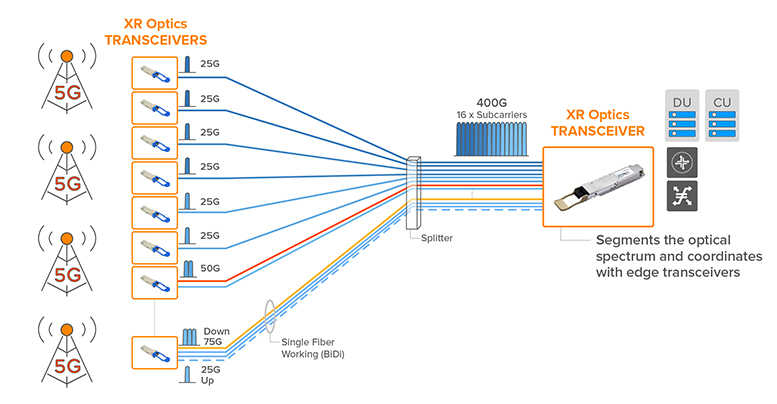 Software Automation Is the Glue

We fundamentally need software automation to bring end-to-end slicing to life. While we have made progress, I think there are two key next steps to enable end-to-end network slicing in the real world. The first is the ability to translate the intent of a slice consistently and automatically, like mission-critical or low-latency services, and map that intent to a set of transport performance requirements and resource allocations at the VPN and packet switching layers, as well as in the optical domain.

The second is the integration of all the networking components that make up an end-to-end slice from the mobile device through to the mobile core and cloud applications. This includes the compute infrastructure, the RAN or radio access network, and the 5G core. The transport network is a part of the puzzle, but the other pieces of the 5G wireless network infrastructure must also be assigned and associated with the same slicing intent parameters for the expected application performance to be achieved.

While it will still take us several years to fully realize mass commercial deployment of 5G network slicing, the conference clearly demonstrated that both service providers and vendors are making strides to enable multiple tenants and consumer and enterprise services over a common 5G network. I could not be more excited to be a part of the ecosystem making it happen.

If you would like to discuss network slicing or other networking topics, please reach out to me on LinkedIn. I am happy to connect.

Contemplating the 5G-enabled Future – Where Will MEC Take Us?

Tags: Access and Aggregation, Mobile and 5G, Software and Automation