When new coherent technologies are announced, a key part of the headline is the maximum data rate of the transponder – whether that’s older 400G technology, the current wave of 600G technologies, or the 800G technologies that will be commercially available next year.

But how realistic is that headline data rate?  Is it just an illusion, and if so, why?

First, let’s be clear on why we want the highest data rate that we can get from a transponder.  If we’re considering exactly the same hardware, then the higher the wavelength data rate, the lower the cost and power per bit.

In a modern coherent implementation, there are dials we can turn to modify baud rate, modulation type, FEC overhead, and other aspects of transmission.  The two biggest contributors are baud rate and modulation type. 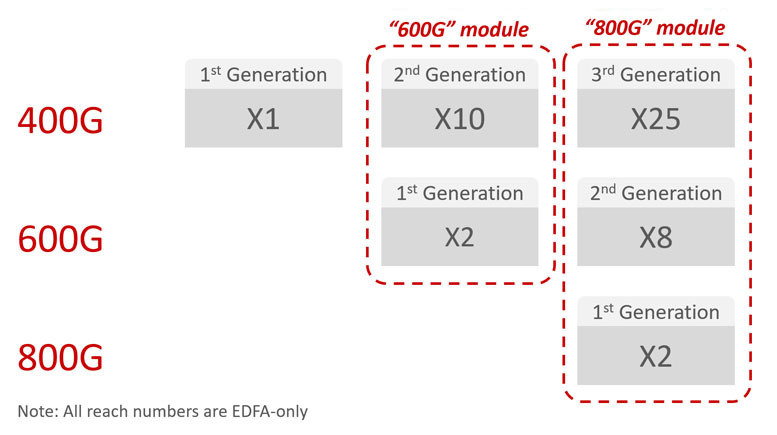 For any generation of transponder, the headline data rate can only be achieved using the highest baud rate and the highest modulation order.  In general, increasing baud rate tends to have little net effect on reach, but increasing modulation order at a given baud rate causes an exponential drop in reach.  Here we can see the typical reach in an EDFA-only deployment for first-, second-, and third-generation 400G transponders – with second-generation 400G having almost 10 times the reach.  The reason is that second-generation 400G is able to use higher baud rates but lower-order modulation (e.g., 16QAM), which delivers the majority of the reach improvement.

With reach of only 120 km, first-generation 400G has a very limited market – it is typically only used for data center interconnect (DCI), and even then over very short distances.  Second- and third-generation 400G deliver far greater reach, which increases the addressable market at this data rate very significantly.

But you may be puzzled by this statement.  What is a second- or third-generation 400G transponder?

For a 600G transponder operating at 600G, the reach is about 100 km using silicon photonics, and up to 250 km using indium phosphide (InP) optics (based on published field trial results).

Reach will have a dramatic impact on addressable market.  Next year’s 400G ZR technology, for example, has a limit of 80 to 100 km, but has low power, multi-vendor interoperability, and a QSFP-DD form factor.  All these factors fit nicely with a short-reach DCI target market.  The wider metro market may require reach up to 600 km, however.  Long-haul is generally thought of as starting at 2,000 km, with regional market distances sitting somewhere between those of metro and long-haul.

But reach is not the only factor we have to consider – there may be network design features at work also, so let’s consider three examples.

With a 75 GHz fixed grid using ROADMs or arrayed waveguide grating (AWG) wavelength multiplexing, we have the option to turn up the baud rate while turning down the modulation type.  A 63 Gbaud, 16QAM 400G configuration would deliver 800-km reach in 75 GHz.

If there are no grid limitations, the second-generation 400G transponder can operate at 69 Gbaud and 16QAM and increase the forward error correction (FEC) overhead to deliver the maximum 1,100-km reach.

From these examples, we can see that transponder programmability is absolutely essential – especially for baud rate, since it is the main factor for legacy grid compatibility.

Infinera is unique in having expertise and a 20-year track record in all three of these areas.  In particular, our in-house fabrication capabilities include a “direct to production volume” approach, so when these new modules become available, we can rapidly ramp up to meet market demands.

So…are headline data rates for coherent transponders an illusion?  If the expectations go beyond short reach, simple backhaul, or DCI, then they may well be illusory.  But follow-on generations of high-data-rate 600G and 800G transponders open up a far wider market for lower cost per bit and lower-power 400G transmission.